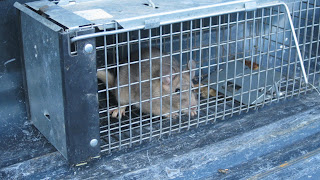 We admired our almost ripe cherry tomatoes one evening and awoke to find them gone the next morning. The culprit left his calling card on the front porch in the form of droppings. On top of squirrels and rabbits, we have the occasional pack rat to content with. They're like an uber mouse, droppings and all, and they steal strange things for their nests. Ian set the Have-a-Heart trap and caught him right on the front porch. He took him far far away to relocate him. He said when he released this fellow, he stretched out to a foot in length. Ugh. 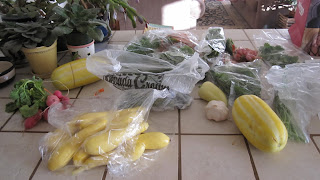 Thank goodness for our CSA basket every week - that's com-
munity supported agriculture. If we were garden dependent, we'd have to eat the rodents. CSA is a co-op of local farmers and boy do I appreciate them. The baskets are getting bigger by the week. We split one with Carol and Harry, and we can barely get through our half basket in one week. I'm learning a lot about "real" food. This is our first year to participate. Our half share was close to $500 but I now appreciate what a bargain it is. It stocks our fridge for on entire week! It's registered in Carol's name and I just got an email she forwarded. The large yellow thing is a melon - do not attempt to grill it. I totally thought it was a squash - so glad I hadn't gotten that far.

While we were gone the past three weeks, I did a lot of thinking about my time and how I'm using it. I decided on some pretty serious changes. I've joined the fitness center that's associated with our hospital and insurance. My start date is Tuesday with a trainer for an evaluation and to help me establish wellness goals. I simply want to swim laps in their saline pool, but I suspect it's going to be more than that.

I also decided to spent less time on fiber persuits. I have gone overboard in indulging myself and I think that was a response to the flood of free time that came with retirement. I have two commitments that I'm considering - one to my church and one to my library. They've asked me to facilitate the knitting club that meets the first and third Sundays of the month. The woman who facilitated it since 2005 is ill and unable to continue. I already facilitate the adult book club (that's the name they gave it - it's not what it sounds) so I wouldn't need to be fingerprinted and go through volunteer orientation again. 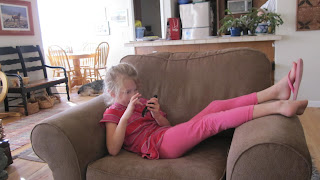 In the meantime, Grandpa and I have Alexia this week. It's a very hard week for her. She's been at the Boys and Girls Club for three weeks and is happy to be here instead, but she starts second grade on Monday! 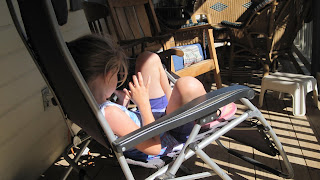 We have only had our iPhones for a month but I have come to see them in a whole new light. Friends suggested apps that Alexia could enjoy and I'm astonished at the problem solving required in these programs. I took this shot while spinning on the front porch. I don't think anything is going to change on that front. I spin and drink coffee while I wake up. 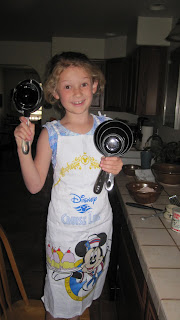 We made cookies today. She was so excited to wear her Mickey Mouse apron that DD Chrissie's friend brought home from Disneyland. This was our first time to use the new measuring cups. They are in every size and we both love them. Imagine one for 3/4 cup and one for 1 1/2. I can't believe I groused at the price since I was using my mother's old cups that weren't even accurate. It took a granddaughter asked for measuring cups with handles. 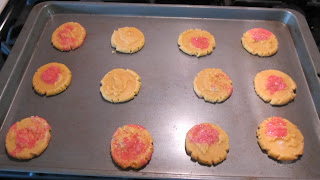 I bought cookie stamps when we were in Florence at a wonderful shop - I think it's called Kitchen Clutter. I look forward to visiting it each time we're there. 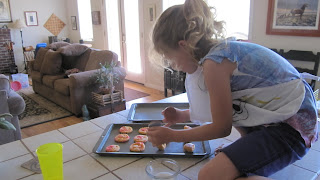 She stamped the cookies two handed, saying aloud: goose, apple, goose, apple. Those are two stamps that I bought, but I'll be looking for more. Someone's grandmother burned the last tray of cookies, so there might be more cookies on the agenda for tomorrow. We have judo tomorrow night and then she gets to go home on Friday, and then - mission accomplished!
Posted by Sharon at 10:08 PM

I'm glad you told us about that "melon"....I thought it was one of the new hybrid cucumbers!!! Let us know how it tasted.

Good luck with the changes you plan on making. They all sound positive...except for less fiber?(!)

That's a lot of summer squash for two people in a week.

that melon had me fooled too! was it good?

I thought that yellow "melon" was a cucumber or spaghetti squash.. Guess it caught a lot of of by surprise!
We eat a lot of summer squash when it's in season. It's lovely grilled or raw with a hummus type dip. I grate the extra and freeze it for adding to pasta sauces and baked goods in the winter. I've 3 different varieties planted, although my boys don't think there will be enough difference to matter.

Less fiber... Sharon are you sure? Going to the gym will give you so much energy, that you'll need to wind down with some craftwork ;-)It's true: it means less time for reading, going somewhere etc., but isn.t retirement meant to indulge oneself? And facilitating a knitting club means you just knit more yourself as well. I've two knitting (Stitch & bitch) clubs, which I started in two different towns - since then I knit even more than I did!
But I admit: sometimes I am also thinking...
No doubt we'll see what you do in this blog.

I have mixed emotions about the cutting back on fiber stuff, but you have to do what is best for you. It's just that you've been having so much fun!

Is that a prayer shawl knitting group at your church? You touched on two things that are dear to my heart: my church and the library. I just don't understand people who don't like to read. And how can I get notices you have a new post?