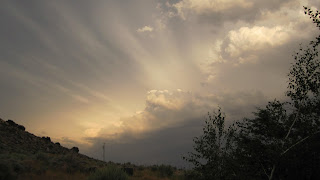 A tropical weather system has moved in bringing with it thunder-
storms and lightening strikes. We could smell smoke most of yesterday afternoon. Sandy called to see if we were okay. She said driving into the valley they had seen smoke near our house.

We learned today that one wasn't lightening caused. Tom's grandson had drive him to his appointment for the epidural shot to treat back pain. Coming home, he saw the fire at our neighbor's place and called it in, then went home, got on his tractor and drove back to cut a fire line. He figured it was that or let it get out of control before fire responders arrived and maybe burn us all out. I wonder if he'll tell his doctors. He's really amazing, my water-witching friend.

Greg and Kat had purchased some marginal hay, perhaps cut wet? It combusted on their hay trailer and burned down their horse shelters as well. It could have turned out so badly, given the winds accompanying the weather activity. I'm so sorry for them. In addition, Kat was bitten by a snake while walking her dog just a couple weeks ago. They're cool people and I hope they don't get discouraged. 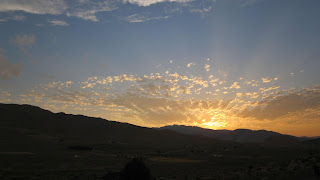 The sunset last night was spectac-
ular. I read in bed until midnight, finishing The Hypnotist by Lars Kepler. It's getting a lot of hype, but my suggestion? Forget it. It's the most badly written book I've read in years. I wanted to know how it ended and could have used those hours so much better. Not worth it, hours of my life wasted.

On the Kindle: Wolf Hall by Hilary Mantel. It's for book club and it's the perfect use of a Kindle because I need the dictionary, plus I can make notes as I go. I'm surprised to find that I'm liking the book, but then I was also a Thomas Costain fan. OOP ( that's library-speak for out of print).

From the library: Heat: an amateur's adventures as kitchen slave, line cook, pasta-maker and apprentice to a Dante-quoting butcher in Tuscany by Bill Buford. I'm not sure why I keep reading, but I just do.

Both are infinitely better than my waste of sleep last night. 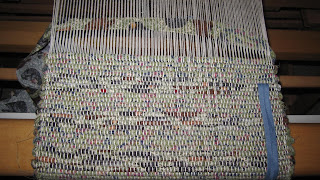 It's really too hot to do anything outside after about 10:00 so I decided to get some placemats woven. I was uncomfortable with the dummy warp and measured it more than once yesterday. I didn't realize that apparently some of it slid back onto the floor. I plead mental illness. This warp is just too narrow and there's nothing to do for it but to unweave, rechain the warp and add the missing width. But not today. I'm rather stab myself with scissors.
Posted by Sharon at 7:46 PM

Another reason for Wolf Hall on the kindle....It's a huge book.

Sorry you didn't like The Hypnotist. I'll still give it a try later. IMO you can skip Cloud Atlas...I've decided it's not much more than a gimmick, despite the hype.

Am currently enjoying Silver Sparrow. It's published by Algonquin Press and I often like their titles. This one is no exception.

The fire: how frightening and how brave of your neighbour to do something about it.
The picture of the sunset is lovely.
The placemats: what I would do is tie the lost threads where they belong and start the placemats from there. Make mug rugs of the first, narrow bit you wove.
Unweaving is so depressing!

I loved Wolf Hall when I read it last year. Grand book and yes, due to size it's a good choice for the Kindle. I'm into George RR Martin's most recent Game of Thrones tome at 1012 pages or something close...
Yikes on the fire. Bad hay is a b**ch in so many ways.
I hope they can go back to the seller.
Stay cool!

Wow, those photos are amazing. What a freak thing that happened to your friends with the hay. I'm now home from my art bootcamp and enjoying reading your blog and catching up. Remember me when you have knitting group!

Thomas Costain! I love him. He wrote an incredible series on the Plantagenents (serious history) and several wonderful historical novels. It's been years since I read anything by him, but I remember enjoying them very much.

I am really sorry to hear about your neighbors. As a kid, I remember that whenever we had to bale green hay, we would sprinkle salt on the bales to keep them from combusting. I also remember very nervous grown-ups, too.

Oh my gosh....I loved reading Thomas Costain back when I was in HS! Loved him! We were visiting daughter in Fallon last week when the storm blew thru Friday night - whoa, those were some winds! And boy did they kick up my allergies! Saw the remains of a lightening strike fire outside Sparks on the way home. Am sorry to hear about the fire and the snake bite your friend has had to live thru.