A Weaver is Born 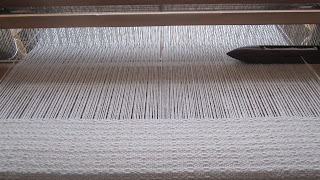 I've finally started weaving with handspun, blindly I might add. 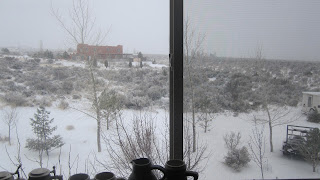 I made a quiche yesterday and the plan was that we'd pick Alexia up in the morning and then go to a baby shower.  She loves baby showers.  We awoke to this and cancelled the trip - why drive in snow when you don't have to?!  SIL Mikeal brought Alexia to us mid morning and said that there was no snow anywhere until he left the highway and entered our valley.  We had between 3-4" and south of us got none.  It's so typical of our weather patterns which come through in bands. 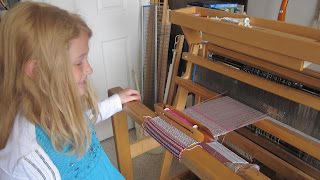 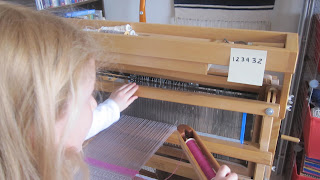 I told DD Christina that I thought this would be the visit to see if Alexia was tall enough to weave, so she arrived full of antici-
pation.  The first thing she wanted to do was weave.  I'm so glad we had the open/closed shed discussion because she was able to try both and chose closed shed.
I started her on plain weave, simply because I had those treadles tied up and she could start right away - she was rearing at the gate.  I had direct tie-up for the workshop so stopped her and changed to standard.  She wove twill for a couple of inches and then we decided to try point twill, but she said she couldn't remember it - could I write it down.  She has her very first treaddling pattern to follow. 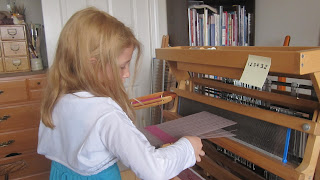 I threw a lot at her all at once.  She needed to enter the shuttle over the floating selvedge at one end and under at the other.  She understood the 30 degree angle of the warp before closing the shed and beating and became quite concerned about selvedges. 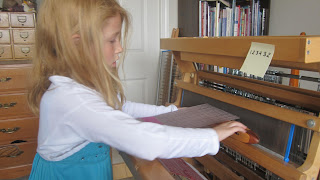 She was at ease and relaxed and quickly under-
stood how to find out where she was in the pattern in case she wanted to undo a mistake, which most times was a loop at the selvedge.  She told me she thought weaving was so much easier than knitting.  In knitting, if you make a mistake you have to tear out the whole row and reknit every stitch.  In weaving, if you make a mistake you open up the shed, return the shuttle until you've found the problem and then weave again.  I do love to knit but I can see her point. 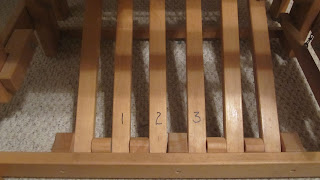 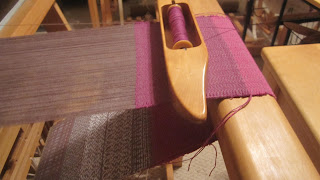 Alexia has a hard time accepting her limited access to our tele-
vision.  She brought Harry Potter movies and thought we should watch them this afternoon in a marathon.  She's learning that we might have other priorities, like watching our NCAA teams lose.  She decided to weave some more and when she quit for dinner, the pink is how much she wove since she started. 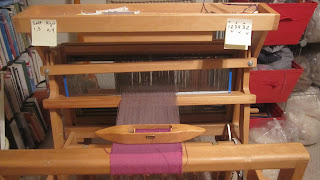 I went back after dinner to catch these last two photos.  I love how she retired her shuttle in the center of her weaving.  She's a weaver, with sticky note directives on her castle.  She'll finish the warp on this sampler and I'm already thinking about what we can do so she can weave her first scarf.

How fun! A new weaver!

LOL, looks like some grandparents may be in the market for a used beginners loom. You gave her the bug, you'll need to make the gift to keep it thriving. ;)

I love this. Aren't granddaughters the best????

Does she have a end feed shuttle, cause it doesn't seem like she has to worry much about her selvedge being in the right place.

I absolutely love the way you make memories with Alexia. Even if she abandons the things you've taught her she will always have those memories. And that's what counts!

Oh, boy, Grandma - you are going to have some competition for loom-time!

Congratulations on birthing a new weaver!!

That is wonderful!!! I loved watching her run her hand over the already woven web lovingly. That is the sign of someone who loves her cloth.

I've never seen weaving in progress so that was interesting to watch. Doesn't look as hard as I thought :-)

yes, tv is going to be a challenge for her this week.

A born weaver!
Weaving children are so much fun!

How fun to be able to pass on your enthusiasm for weaving. And you're a good teacher. After looking at the pix and the video, I now have a better understanding of some of those mysterious weaving terms you use.

Start them young....that's my motto! She did such a great job! (And, isn't it fun sharing the love of weaving to another generation!!!)

You are a great grandmother, so much patience and love.

At the risk of confusing her initially, you might make it so that the treadles that are used when throwing from the right are pressed with the right foot, and the reverse for the left.

I have set my treadles up to "walk" them almost from the beginning - alternating right and left feet with the same shuttle throw. It makes it easier to remember which direction you're going or which treadles to push.

She is a weaver through and through - I'm so glad you're her grandma!!