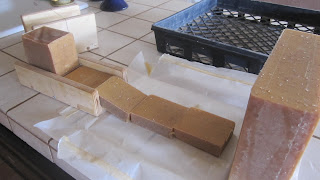 It was such a relief yesterday to unmold my soap and have a perfect batch. I've only had two failed batches in the over twelve years of soap making - it's expensive. And on top of that, I was out of coconut oil and couldn't make any more. I ordered more but my supplier was out of stock, so it was about 10 days before I got the email that they had received their shipment and she would get my oil out that very day. Fast forward three weeks and past the wedding, I called to see what was up. Had they lost my order? I mean, I really like my supplier, her prices and the quality of her products, but that's a long time. The heater in the storage tanks for the coconut oil had to be repair before they could pour the oil. Unheated, coconut oil is like plastic. I cut it into chunks to weigh it. 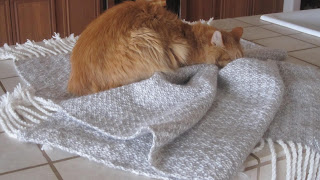 I finished another lap robe yesterday, fringed and fulled it and hung in on the balcony to dry over night. I brought it down to trim the fringe and had immediate interest. This is its inaugural use and according to Charlie, it's a success. I used it earlier this even to read and I really like it, though I won't use luster longwool again - it's a wrong application. I have SO many other fleeces to choose from, including boxes of our own. I just heard from our shearer, and he'll be here next month which means I will have more fleece. Why does that not excite me. 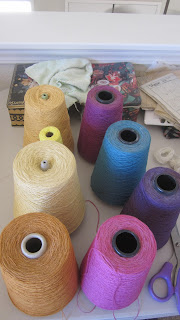 These are the colors I chose for my next dishtowels. It's another of Beryl's patterns which is a block weave she called turned taquette. She said it's a great way to use up lots of bits of color - I think she said she had seven blocks of different colors. I had two blocks with four different colors for a total of eight. I wound the warp in bouts while I supervised Alexia's weaving, not that she really needed much supervision. 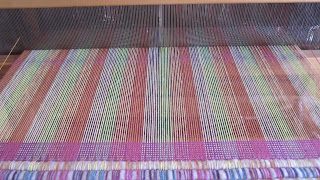 This is what they look like when threaded into my warp. 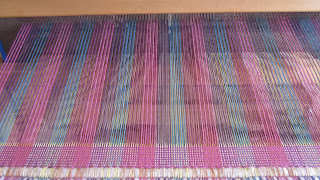 This is how it looks when I lift alternating warp threads 2 and 4. 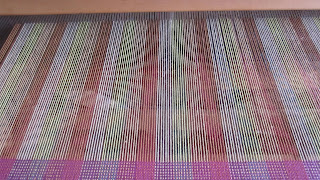 This is what I it looks like when I lift alternating warp threads 1 and 3. The gold paired with strawberry pink is stealing it's thunder, making that strip of warp look brick red. 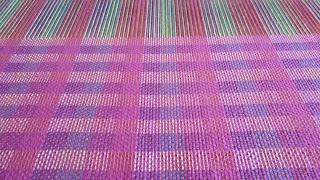 This is what it looks like when I weave with watermelon pink as weft - pretty!
Posted by Sharon at 9:37 PM

I love the Charlie approved blanket. My kids always refer to my shawls and blankets, as Cat blankets, since the cat is the one who seems to use them most. Fresh fleece is wonderful, even if you don't need it right away. I do love your new towels! It's a cheerful colour combo for sure.

You've been busy - fun to see what you've been up to. Love the new spring colors for those towels!

Love the lap robe -- such a lovely color, and lots of great texture. That Charlie is a smart cat.

Sounds like you've been having a lot of fun. I like the colors for the towels.
Heidi

LOVE those new towels!!! They are a riot of spring color! How handy to have Charlie test out your weaving!

Those are some nice summery towels! I really like the blocks of color. Are you going to use a different weft color for each towel?

So glad the soap came out. Nothing frustrates as much as wasted time and supplies.

I think those dish towels will be smashing!!!!!