So Close to Sparking Boy 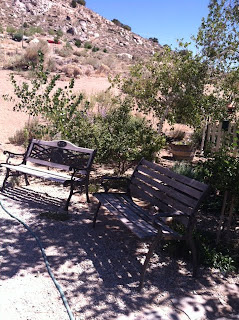 Our neighbors Tom and Carol came down this morning with tables, chairs, a bin for recycling cans and the gift of the bench on the left. A coworker had given Carol some benches which she is refinishing and she gifted us with her first project. We moved an old bench to join it and Carol showed me how to tighten it up. We have more which she's promised to help me refinish next month. Meanwhile, our gathering starts the day after tomorrow. Petey arrives first and will help Ian put up all the tents we have at this point - I think seven. Trailers from Utah and Oregon arrive Thursday and thankfully, stepson Dougie has offered to cook the spaghetti on Thursday night, after driving all day from San Diego.

I've appointed him to the food committee for next year and he has accepted. Right now I am the food committee but everyone pitches in. We expect close to a hundred on both Saturday and Sunday, but so much is barbeque and potluck sides that I'm not worried. The homebrewer's tasting will be about 4:00 on Saturday, and if you're reading this and you live within driving distance, this is your invitation. Come. Anytime. Oh yeah, I need to write name tags on the shopping list tomorrow.

About the truck, Ian called and spoke to a sheriff. He said since the insurance company already has referred us to a body shop, that means the other driver has admitted guilt. Nothing is going to happen this week but at least it's good to know we're not hanging out there - I hope resolution is coming. 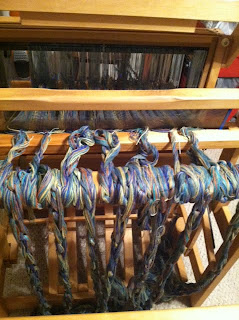 I am trying to get a warp on Maudie Mae. I think it would be fantastic to be able to demonstrate weaving which is especially dramatic with a two block weave. I've wound another sea glass colorway, but I amped it up with cobalt blue. It showed up a lot in Google images of sea glass and though I don't have it my sea glass collection, I can see that it belongs. I still might sneak it on the loom - I hope.

I was supposed to submit placemats this week to the Artist's Coop for their September show, and I feel terribly unsupportive but I'm out of time. I did finish the annual budget for our fiber guild late this afternoon. Our guild board are all freshmen, we are learning by the seat of our pants and I'm thrilled to have such eager smart people supporting me. I'm the prez. I said that before, right?

I did the itemized shopping list for tomorrow right after that. Out of all the prep for the Gathering, I've arrived with a seasoned committee, kinda like a board, only I told them, they're not elected, nominated by me and I'm the prez. Ian and I are ready and we can't wait to see everyone.

A friend from my book club sent me this. If you're an NPR junkie like I am, I'm sure you will appreciate this fresh face of Fresh Air host, Terry Gross. I hope you enjoy it as much as I did. Meanwhile, I'll be back in a week - after Sparking Boy. That's what friends affectionately call this weekend, since it's the same weekend as Burning Man and we have a campus of trailers and tents.

Beautiful colours. Hope you show us a picture, when woven a little, soon. :-)

Sounds like you have some exciting days coming up!!!! Enjoy! I'm looking forward to seeing this warp after you start weaving....love the colors!

Gosh, a beautiful warp and a gathering of friends. What could be better?

Okay, that was funny in a very weird way. Always interesting to see what someone whose voice you know looks like!

Wow! Sounds like a big weekend -- have a terrific time.

I'm really excited about that movie (fellow NPR fan) and seeing a special screening with Ira Glass himself. : )