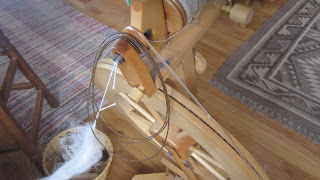 I've gone back to spinning with my "happy" light each morning.  I've knitted in front of my happy light for the past couple months but find that it's the combination of spinning and the light that seem to energize me.  This morning the inevitable day came.  I had to put on a new drive band, something I've put off for years.  I've draped the old one there to show how pathetic the old band had become.  I had built up in my mind how traumatic the change would be, and of course, it wasn't.  Isn't that so typical? 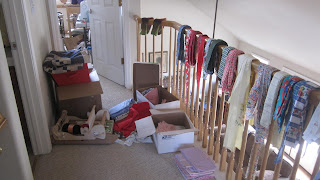 I've decided that what I really need to do now that Lilith is a free loom is to weave a rag rug runner.  It should be a quick project to weave with most of the time involved in cutting, sewing and folding strips. I want to get the prep done so I can put this all away.  My work area is a mess and I hate it.  The cardboard box is loopers - an upcoming project. 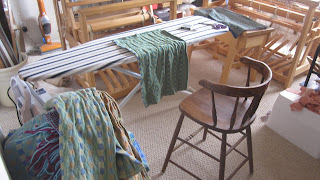 It doesn't help that the studio is a mess too.  I've finally finished the warp that was on Maudie Mae for two months.  This winter has been a fog for me.  I'm in the process of hemming ten towels.  I find the easiest way to turn the hems is to lower the ironing board and sit at it.  The towels are a frightful mess until they're finished.  I'm always amazed how they clean up - ugly ducklings, they are. 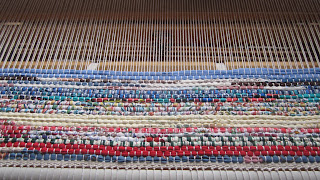 This is the beginning of my new rug.  I'm just not capable of totally random colors so have selected blues and reds with a touch of yellow.  We rented the movie Argo and watched it this afternoon.  I wound eight pinwheels of sewn strips - I cannot watch with idle hands.  I am not a fan of suspense movies so was putty for Life of Pi.  I was surprised at how much I liked Argo.  Tomorrow all will be revealed.  We liked Beasts of the Southern Wild but I'm afraid it's too artsy for the Academy. 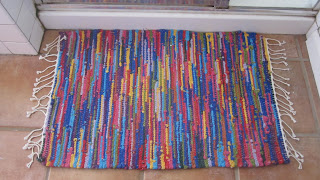 This is what the looper rugs will look like.  I'd like to have at least a half dozen for my October craft fair.  I was sorting and cleaning the loopers that Hilary sold me and realized I needed more yellow. She sold me two bags of just yellow and I'm not going to start weaving until they arrive.  I think yellow is the ticket.  I love looper rugs.  This is ours, a bathmat.  It's as functional as it is beautiful.

In the past month I joined OLLI, and through it have a library card for the university library, have already checked out my first book, and have enjoyed 12 hours of a fabulous geology lecture series.  And I also decided after spontaneous deliberation that my Lenten fast would be Facebook.  I'm rather sorry because I can't undo it and I miss the interaction a lot.  On the other hand, I cannot believe how much time that has freed up.

I love the looper rugs! You might have to tell me how much they are...

I've been going great guns getting my fiber stuff organized and ready to start dyeing in earnest for the first of 4 shows this spring.

My loom is neckid, and I'm not happy about it, but can't seem to get a warp on it - it will come.

Good on you for giving up FB. I can't, but I know how much time it takes...

I do the same with lowering the ironing board and using a chair to work on pinning up towel hems.

Love the staging area for rag rug strips - that railing is a great 'tool'.

I was wondering too what the price was for those looper rugs!

Miss you on FB Sharon, but it can certainly be a time grabber.

For some reason, I thought you bought a press for ironing all those towels. If you didn't, you might want to consider one. It is a great time saver. I like pressing mine while they are still a little damp. I use it for the hems also.

I like your new rag rug. Those are my favorite colors.
Jenny in Charlevoix the Beautiful

I always figured a messy studio is a happy studio - a neat one (at least in my case) means nothing is going on. :)

I know what you mean about the meditative quality of spinning. I rec'd a Hansen mini-spinner for Christmas/birthday. And although I really do like it, it's not the same as using a wheel. Although both are spinning yarn, the wheels are much more meditative.

IMO all fiber art is messy...and my house is proof!! If it's not the stray fibers drifting everywhere from the spinning and the loom lint. Then it's the bags of WIP's and UFO's. And that doesn't count the stacks of books and magazines that are gently slide off all of the tables and ottomans to land scattered on the floor.
Nothing to do for it but keep your hands busy!!