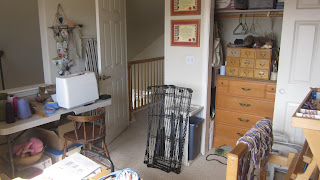 I stopped at Costco yesterday on my way home and picked up yet another shelving unit.  At $30 I knew I couldn't go wrong.  I had to stop ignoring the failure of that dresser in the closet as fiber storage.  The moths were having a picnic. And I love the library catalog on top - where would it go? 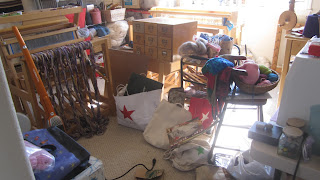 It got really messy.  I had to pull everything out and I found a lot of needles in stalled projects that I had forgotten about.  It was time to get serious about what I was storing. 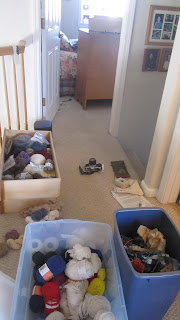 It spilled out onto the landing and into the guest room where I was relocating the dresser.  I was about three hours into it and realized that I had to finish it off.  There would be no weaving today.  I can't believe I thought there would be.  My goal was to get wool into plastic bins. 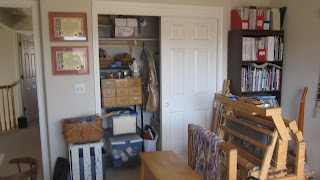 At this point I thought I was done and then I noticed that the very heavy library catalog was bowing the shelf and had to be relocated. 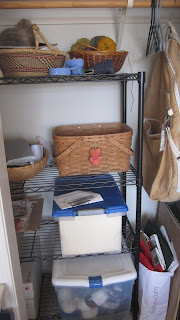 I'm not sure this is the permanent arrangement but it's the solution for today.  I threw a lot of stuff away.  Yesterday was trash pick-up and I've half filled the garbage can already.  I just stopped thinking about it and let stuff go that needed to go. 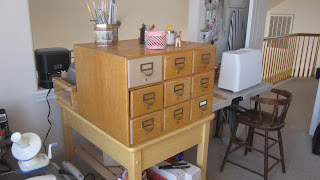 The library catalog has been relocated to the cart that my drum carder sits on.  That may not work in the long term but at least the boxes under my sewing table are gone and I can actually put my feet under it.  I don't use the carder very often.  We'll see. 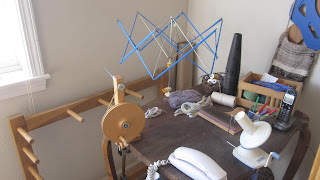 There's no room on the walls to mount my warping board so it sits behind the table with my umbrella swift and both the bobbin winder and ball winder.  I did find a place to stash my mini-mangle between this table and the one with the card catalog. 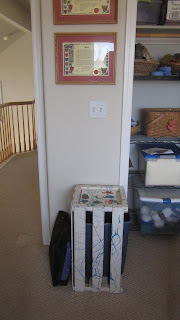 When I need to use it, I set my warping board on this crate, angled at a slant against the wall.  It has worked well for me over the past couple of years.  When I'm done I return it to it's spot on the floor.  It's what you do when you have a studio the size of a postage stamp.

Love the shelf - I have one, but I think I have to do a costco run to get another. Although if I went through all the old SpinOffs and Handwovens and sold some of them, I could use the shelf I have... Hmmm.

I'm in the middle of revamping my "studio" room, which is about as big as yours, but has doors in walls to a closet and a bathroom. With the computer and desk in here now, it's a little crowded. Hence the moving of fleeces to the dye shed (trailer).