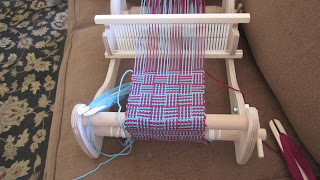 I finished with the first scarf in plain weave, using multi-
colored warp and a solid weft from stash yarns.  I decided that since Log Cabin is a patterned plain weave, I'd warp for that and weave a sample to demonstrate future options.  Oops.  I didn't have any idea how clueless I was in using two different threads in a continuous warp.  I wish I knew someone who had a book because our library doesn't have anything on rigid heddles and I don't want to buy one.  As you can see, I had serious warp tension problems.

I know it can be done because I've seen the fruits.  I'm not teaching this technique but will at least take the scarf to show the potential.  I unfortunately used a really stretchy superwash merino knitting yarn that was ill-suited.  When the tension was removed, it shrank by 30% - yikes - but I can turn my mistakes into teaching opportunities.  The class in scheduled for next month.  I plan to get out to Jimmy Beans this week to select yarns for class materials, if the snow storm coming in tonight isn't too bad.  I know what *not* to use.  It's like - I'm so glad we had this conversation! 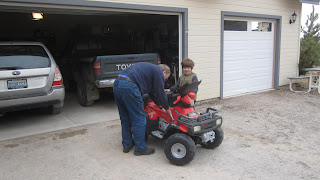 Our kids from San Francisco came out to spend the weekend with us.  Michael has a new job - you know how that goes - they weren't able to confirm until earlier this week that they were coming. Ian just bought this battery-operated kids quad from Neighbor Tom, whose grandsons have outgrown it. 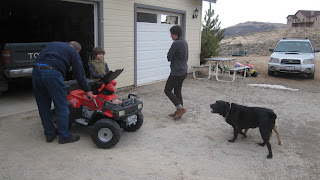 Tom's boys hadn't used it in a long time and the question was - would there be any juice in the battery.  Noah was so anxious - you can see the anticipation.  No pressure, Grandpa. 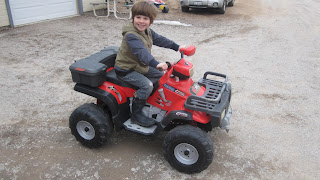 And it was all systems go.  Noah lives in the Mission District in a second-
story walk-up.  He does have a bike but he can only ride it one block at a time and then wait for this parents to catch up before getting the go-ahead.  You can see what this means on his face.  His patient daddy spent a couple hours over the time they were here, walking along side as Noah puttered along our dirt roads. 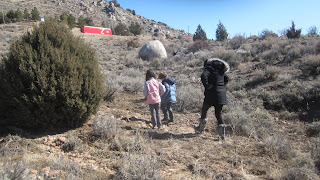 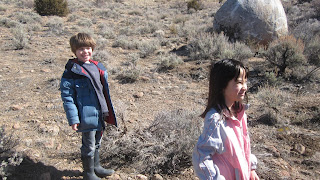 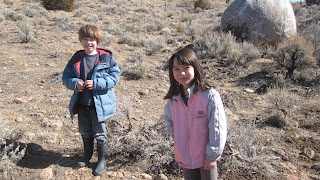 Over the last four years, Noah has developed a very special relationship with our neighbors' daughter.  He wanted us to call her the evening they got here and then was anxious all through breakfast.  I called Joe and said, I have a very excited little seven-year-old boy who desperately hopes Hiroka is available for a play date.  He said - Hiroka would love that!

We went hunting for arrowheads, which ended up being a collection of pretty rocks.  Both of them came home with a couple pounds of different colored pieces of chert.  It's like collecting rock Easter eggs.  They played hard for four hours, finishing with a indoors game of hide-and-seek.  Hiroka always hid on the sofa under afghans which had us giggling so hard that Ian took a picture and sent it to Joe.  The kids were shrieking with laughter and we were caught up in the joy of that simple game.
Joe emailed back a while later - I think Hiroka doesn't quite grasp the concept, but she had a great time and arrived home very tired.  It's those little sweet nuggets, hidden in usual places that make life so rich, dontcha think? 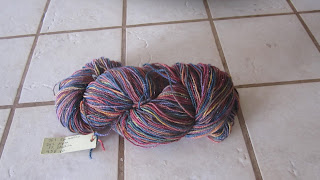 And to top it off, I received a mailer on Saturday with this gem in it.  My friend Stephanie had said on Facebook that she had discovered something very pleasant after moving a stove.  The person who guessed it would win a prize, and that person was me.  Steph has an Etsy store where she sells hand-dyed rovings and yarns.  There are 435 yards here and I will do the math to turn this into a woven scarf.  This picture doesn't do it justice but there's a fleck of angelina which provides a subtle sparkle.  Almost forgot.  I said dead mouse?  She said -half a dead mouse!

The happy weekend hit a snag on Sunday.  DD Chris alerted us that her brother-in-law was being careflighted - would we please pray.  Unfortunately, he never made the flight.  He was dead on site of a dirtbike accident in his favorite recreational area with his brother and a group of friends. Our newspaper reported him as being found by a search and rescue team and identification was withheld upon notification of next of kin.  I know newspapers are struggling to retain relevancy,  but that release was painful to an already distraught widow.  The family is in a state of circling the wagons.  Family.

Life is so fragile. Every minute of every day.
Feeling sad for the family and for the man whose life was cut short.
We just never know.

Those kids will remember that day for a long time to come. Days like that are what become memories later in life.

Wonder what became of the other half of that mouse...

I will keep Chris and her family in my prayers.

Log Cabin is a favorite of mine and one I love teaching to my students. I have found Cascade 220 (not the superwash version) to be really good for weaving scarves.

I am so sorry. Prayers being said for you and your family.

Log cabin is one of my go to patterns when I need something simple but eye catching. Good work on the rigid heddle, despite the learning curve. I'll be looking forward to hearing how the class worked out.