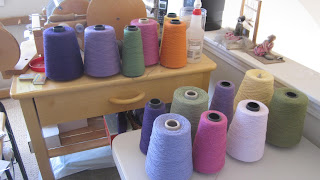 I've been fooling around with colors, looking at Google images for both crocus and hyacinth.  After pulling off the sea glass green towels, I'm ready for some spring color. 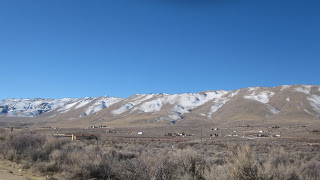 After endless weeks of grey days, the sun is finally here.  I haven't walked the dogs in the cold days because it hurts to breath so was thrilled to finally have a chance to get out again. 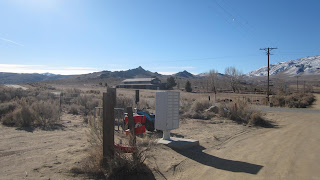 We walked down to the mail boxes and then came back again.  This is the school bus stop, I find it ironic that the vehicle attached to the bike rack is a quad.  That's the vehicle of choice out here - you won't see any bikes. 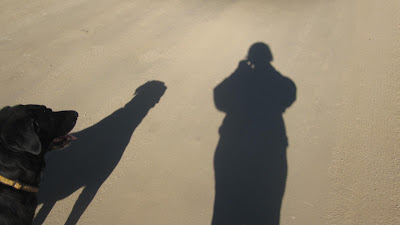 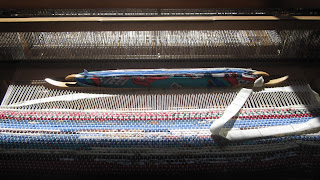 After our walk, I went back to work on the rag rug.  I figured I could knock this one off in no time and was appreciating this shuttle.  It's one of those that Laura gave me after her mother passed away.  I haven't used it before and it's perfect!  And then I noticed that a couple warps had broken, so I mended them and then noticed that a couple more had broken.  I had only woven 20" and had eight broken warps.  I saw the handwriting on the wall.  This was old warp and was probably further weakened by the hot tea I used to stain it.  It sickened me but I knew I had to cut it off. 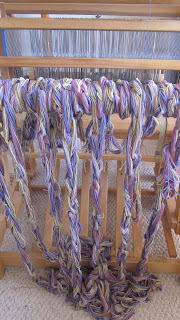 I needed to do something happy so I wound a dishtowel warp in a hyacinth colorway.  I love to dress the loom just as much as I love to weave on it so enjoyed seeing these colors come together.  And then I quickly wound a five yard warp for three looper rugs, which I probably should have saved for another day.  At least that's what my back is saying tonight.  So I'm fixing to weave two projects and wish I had space for a third loom. 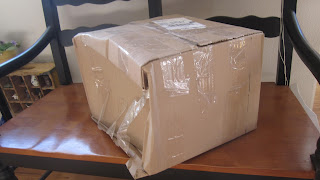 I have never received a box from UPS in this condition before. 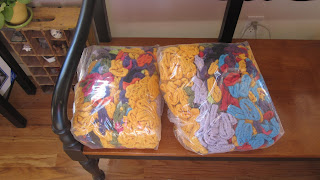 It's a good thing this is what was inside.  I'm so excited about these colors.  I have to be in town tomorrow but you know what I'm going to be working on this Thursday.

I can't weave on Friday either because good news - I'm a library sub at Traner Middle School that day and again next Monday and Tuesday.  I knew that there would be no library subs until the entire catalog conversion was completed in February.  I started this journey last August and the wheels turn slow. 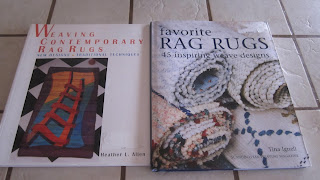 I have new books in my fiber library, courtesy of Benita Story.  She had an extra copy of one and included the other as good measure.  I cannot think of a good reason to weave rag rugs and I don't understand why they get under my skin.  They do not sell well at craft fairs and yet I am compelled to weave them. 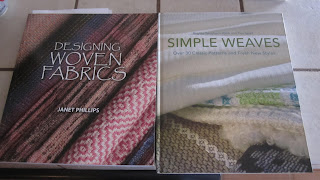 These are two brand new books.  The one the left I purchased for our guild and it will be part of a scholarship fund raiser.  I don't get to keep it but I get to read it for a week until I have to pass it on.  I buy, they pay.  The one on the right just came from Amazon today and it's all mine.  It's perfect for me and my four-harness loomdom. 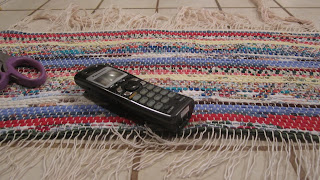 This is me visiting with Laura.  She called tonight and so I put the phone on speaker and pulled off the rag weft that I'm salvaging from the failed rug warp.  I have to say that if you have to savage (note that savage and salvage are only one letter apart) a warp that it's good to have a friend along.

Stop me if you've heard this one.  So a knot walks into a bar.  I mean this guy is totally frazzled, at the end of his rope.  He doesn't know which end is up.   "Are you ready to order?" asks the barkeep.  "I'm a frayed not." he responds.  (It helps if you read it aloud.)

Well, too bad about the rug warp, but at least the warp won't be wasted.

I love the new towel colors. We are gray here, too, and those spring colors just look beautiful to the old eyes.

I have heard that one, and I still love it.
I laughed when you said rag rugs don't sell, since that is pretty much what I've been doing for the last 12 years.
And I applaud you for cutting off a warp you knew wasn't working. That takes guts.
I know.

Fiber humor! Love it! Rag rugs are fun to weave...and I do love them in my house. I think it might be watching how the rags play together in the warp that keeps our interest.

How fun to see what you were doing while we were talking! I enjoyed the conversation, and the thoughts and the ideas sparked. There are times when I miss living outside your garage in my trailer...

If you're going to be at Trainer Middle school Monday afternoon, maybe we could meet up and I could give you the books you wanted to borrow.
Heidi

Here's to good days ahead!

Good for you! I love your attitude. I'd be ignoring the bad situation for months and not being too happy about it. I look forward to seeing your next colorway.