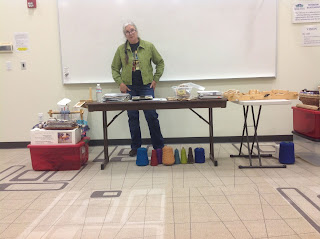 Last night was our guild meeting with presenter Joan Johnson from the Hangtown Fiber Guild talking about the not-so-rigid heddle loom.  Sadly because of the snow, attendance was poor. 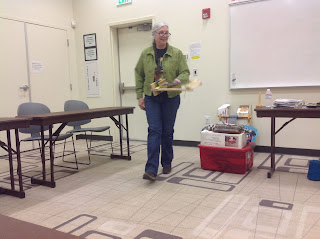 She brought six looms but I really took to this one.  It looks like a backstrap loom in a truncated portable form.  I sure could see the connection between the two.  She shared projects, books and possibilities. 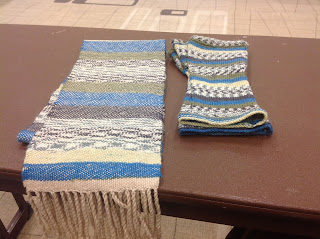 My favorite project was this scarf, woven from the same self-striping yarn as in the mitts. 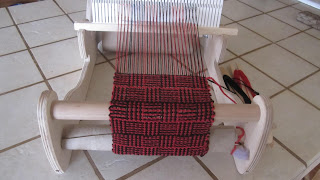 My own rigid heddle class is a week from this Saturday and I still have to finish this scarf which I want to use as another sample.  The class is for absolute beginners and will essentially be how to get the yarn onto the loom.  It's just a two-hour class so I want to have their project started to the point they can complete it on their own.  I haven't had time to work on it this week and am starting to feel anxious about the deadline.

I've subbed in two very dufferent middle school libraries all this week.  What a difference the neighborhood and principal make. The school where I will sub again tomorrow is fantastic.  I would sub there again in a heart beat and I won't go back to the other one again.  Middle school starts at 7:30 so I have to get up at 4:45 to have plenty of time.  The last two days I've had to drive in snow and on icy roads. 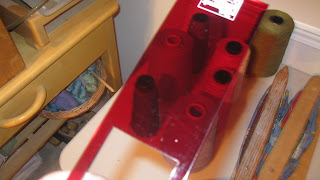 I wanted to share the tool that I just got in the mail.  It's called a Ruby Beholder.  Beryl had one in her purse and used it at a guild meeting.  As you can see it's a value finer.  When I'm placing my eight colors, I want to separate like colors and also values.  I know I'm supposed to be able to squint and find the value, but I can't.  I realize that not everyone needs a value finder, but if you do you can order one inexpensively through Amazon. 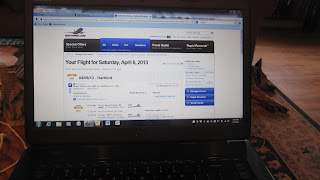 And this is my eticket for Southwest Airlines.  We decided yesterday that I should go with Christina and Alexia to meet Olivia Grace next month.  They're going the week of Alexia's spring break.  Ian was able to get a seat for me on the same flight this morning and I'm giddy with anticipation and excitement.  We'll be there for a week.  It's the most time that we will ever have had with John, on top of getting to hold his baby.  Never has it been more apt, all's well that ends well.

What a cool little tool! I can see it being very useful for those times when you just aren't quite sure. We all have those days :) I'd love to find one, but they aren't available on our Amazon.

Congratulations on your great granddaughter! How excited you will be to go there! New babies are always special, beautiful, great, etc, but more so here! Wishing you a very happy time.
I'll see if Amazon has such a useful gadget for me, too.