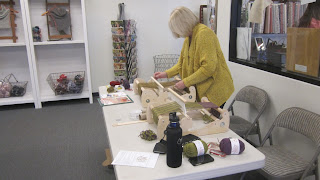 I only had one student for the first ever rigid heddle loom weaving workshop at Jimmy Beans Wool.  They've just started carrying Schacht products.  Sandy is a yarn rep and purchased her Cricket last year at TNNA. 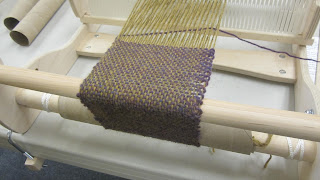 Because she represents Lopi and has a lot of sample skeins, she chose to weave her first scarf using it.  Lopi is from Iceland, from Icelandic sheep and is generally considered a fiber for outer wear.  It's overdyed, which means the dye is applied to natural colored wools.  It's lovely in appearance but is a bit hairy and not really apt for weaving but her colors are working up beautifully.  Sandy chose a yarn that is "sticky" meaning the fibers interlock and unweaving to fix an error is nearly impossible - what an ambitious yarn for a first project!  She did great.  I told her that we all have one selvedge better than the other and suggested she evaluate what she does on the left side since that's her good side and then try to repeat it on the right side.  The right side was looking much better by the time we left. 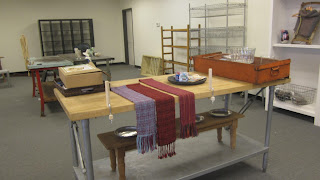 These are the samples I wove over the past month.  I've been busy!  They're remodeling at JBW, making room to display bolts of fabric and in the corner there will be a little shrine, a display area for the Cricket.  If you weren't aware of it already, JBW now carries fabulous cottons.  Check it out here.  I have one pattern already cut out and ready to sew from Kaffe Fassett fabric, but I've been too busy.  I'm retired - I should never utter those words! 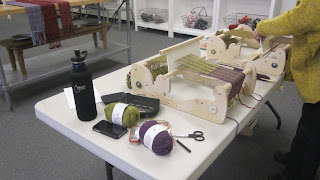 At the same time, I'm trying to get the shop loom warped and ready to leave for customers who'd like to throw a few pics.  I'm using the Lamb's Pride yarns that Schacht provided in the kit and it's ironic that they're the same colors that Sandy is weaving.  She chose to stand - it does give more control.  She was pleased with her work and the loom, but said she'd work on trying to do it seated after she takes it home.  I had a great time and I hope I planted a seed in Sandy's fiber journey.

There's an opportunity to participate in an arts event this summer.  I just got the email, but I would need a portable loom.  I think it's time to get serious about finding one, even if I have to drive to bring it home.  If I can't get it in the back of Eleanor, then it's not the loom for me.

I just finished three more days of subbing in a different middle school library.  In this school, the librarian is also responsible for teaching junior great books so I've had a session each day.  Just one session of loud hormonal teens a day is a challenge.  I admire the teachers who do this every day, every week.  It's like herding cats, but then I love cats.  This is a neat age.  Though I do wonder how they managed to turn "why" and "please" into a whine.  It sounded the same at all four middle schools I subbed for this month.  How do they do that?!

In the Monday class, one of the mouthy boys taunted a boy passing through the library, disrupting us all.  When I told him to shoosh, he said - Whaaaat - that's Just Smiles, the crazy guy on Facebook.  He added more but I just wanted him to stop disrupting.  Today my aide in the last period was visiting quietly with a couple of students and I heard Just Smiles in the course on the conversation.  After her friends left, I asked her about it.  She told me that Just Smiles is a student at their school on Facebook who is scary and has been threatening students but no one knows who he is.  He keeps changing his profile picture and she said he has even posted a picture of a dead body.  I asked her if she had spoken to her counselor and she said she hadn't because she's scared.  I put that all into an email and sent it to the librarian who will be back tomorrow.

We take teachers and school staff for granted because they've always been there and we expect they always will be.  We need to pay them for their dedication and sacrifice.  I've learned in a short course that keeping 24 13-year-olds on task for an hour is no small feat.  People throw the word hero around quite loosely too often it seems to get attached to a sports figure.  I think teachers are heroes.  That's my thought for the day.

Gotta pack.  We're leaving in the morning for San Francisco - it's Grandparents Day again and we get a weekend with the fantastic Noahsan.  Can't wait!

Congrats on teaching your first class on the rigid heddle. If she is a yarn rep, I'll be she is champing to try other yarns on the wee loom.

You are a braver soul than I am. In schools today, teachers have so much to worry about with security, I wonder how any teaching gets done.