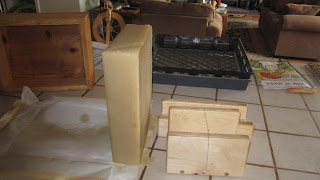 It's been too cold to make soap. My supplies are in the garage so I set up there to measure oils and mix the lye.  My soap oils are solid and even the olive oil was semi-solid when I was getting started..  I had to set the oil on the deck in the sun to thaw before I could begin, but here's ten pounds of Lemon Bar and it smells fabulous.  I doubled the essentials oils - this may be my favorite.  Trendy artisan soaps haven't tempted me.  I like great lather and I don't want to itch.  I need to make twenty more pounds of soap soon because it takes a month to cure.  I won't have time to make soap for another ten days and that worries me. 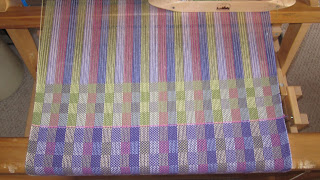 I hope I never tire of how the inter-
lacements of color works.  When these two towels are finished, I'm not sure anyone would realize they come for the same warp.  The green muddies the purple to nearly a brown. 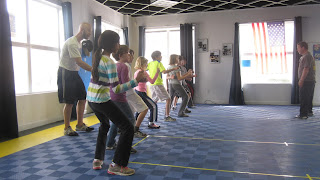 I got a panicked text from my daughter - did you see my email?  I checked and found her frantic request that I pick up Alexia from her Grandma Karen's and take her to her fencing lesson. Mike had to work.  He would normally have finished up on Saturday but he's fencing in a tournament.  She's the one in pink. 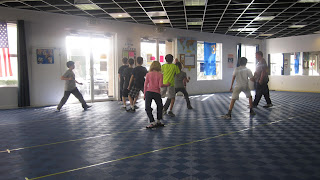 Lulu has tried many things - judo, ballet, gymnastics, but she is passionate about fencing.  Her daddy is an accomplished and competitive fencer.  She said in the car when I asked about her interest, You see - I have my daddy's body so I'm sure I'll be good at his sport.  She's eight years old!  If you know anything about fencing, you can see that her stance is perfect. 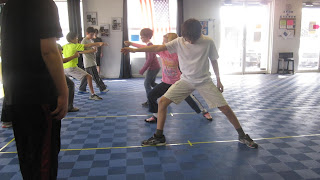 Her lunge is the best in the class.  She is methodical, often holding up the class.  Initially I was concerned that the instructor had to remind her to catch up and then I saw the look on his face.  He knows she's a good pupil. 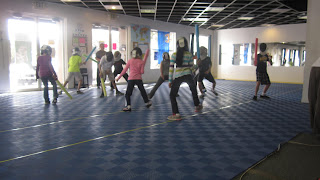 From exercises they go to fencing with facemasks and noodles. 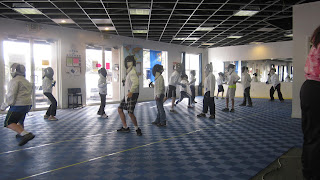 And on to body protection and swords.  Ian has gotten the biggest kick out of DD Chris and husband Mike, a belly dancer and a sword fighter.  And their daughter follows suit.  Her older brother used to call it fenking when he was a toddler and we still do.

Today I subbed at a middle school library, the newest in Reno. These were the nicest and most interesting kids yet.  It was "hat day" so if someone paid a dollar, they could wear a hat - very fun.    This is an entitled $$ school  but the students wear it well.  Every period the library had a teacher with a reading class and they couldn't have behaved better.  The highlight was during second period when a student Mariachi band came in and asked if they could play for us.

Oh, and I do have one student for my rigid heddle class tomorrow.  I'm going to teach it like I mean it and then leave the warped loom and samples in the shop, trolling for prospective weavers.  My grandma used to say - How can you have mo'lasses when you ain't had no'lasses. And I say, how can you have mo' weavers when you ain't had no weavers.
Posted by Sharon at 6:36 PM

I took fencing in college...I admire her determination! It is a wonderful sport. Your day at the middle school looks interesting.

Twenty pounds of soap sounds like so much!! But yikes..it's the middle of March, where does the time go?

Love the hyacinth warp. Color interaction is so much fun.

The parting sentiment is fun and very true!

Definitely strong on the horns - what a fun thing to do. I too love that hyacinth warp. My favorite colors. :-) T.

Fencing has always looked interesting to both Scott and I. So graceful, yet so intense.

That's a girl! Make more weavers! Once they get hooked with the rigid heddle, introduce them to the real thing. :)