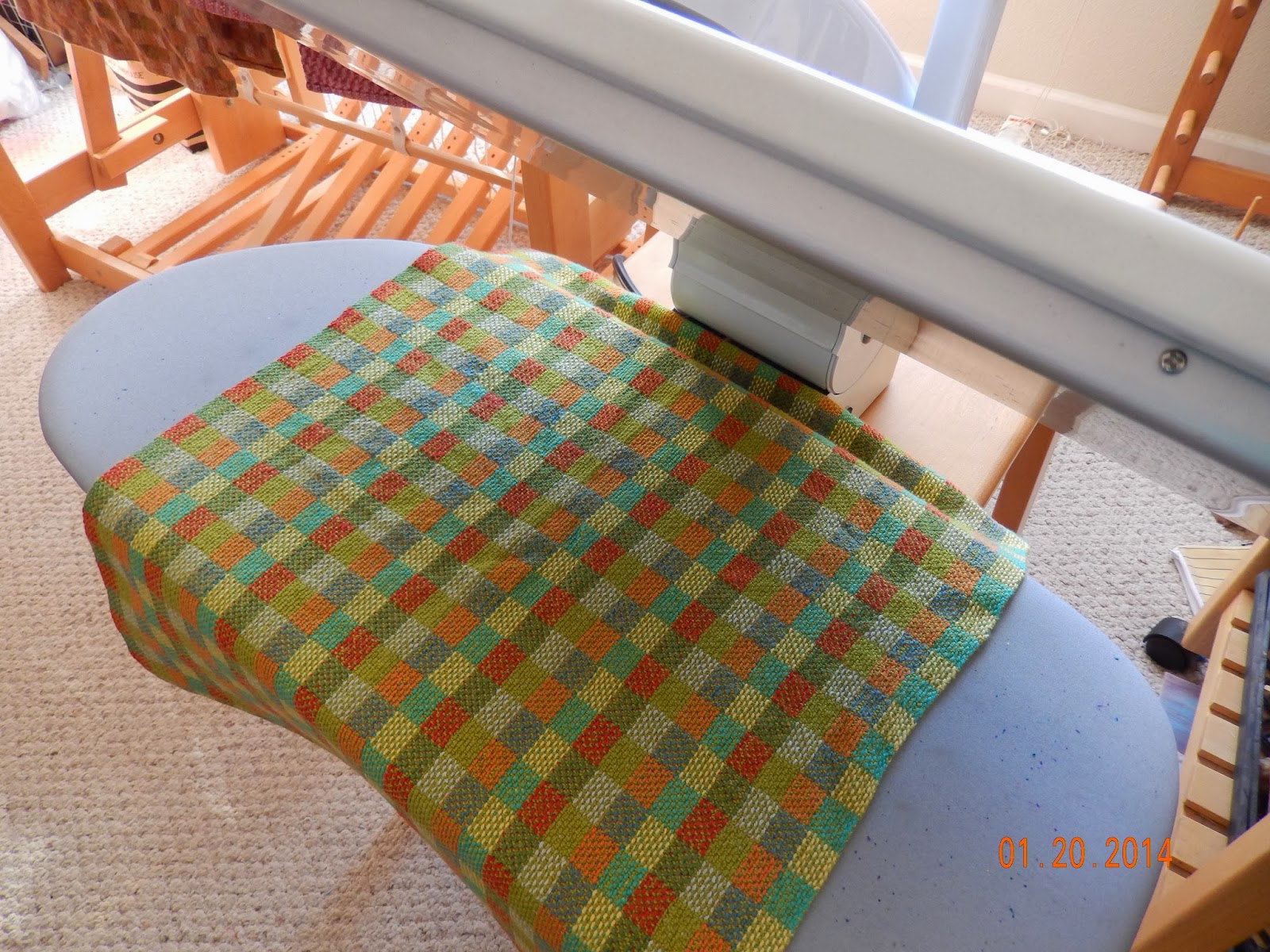 I finally finished the first towels this year and certainly since my accident.  I was really rusty and made enough mistakes in the threading and sleying that I had to cut off the warp to fix them and lost one towel in the process.  This is the "bad" towel and probably I could have continued but it bothered me.  I still love my mini-mangle.  What took an hour with a steam iron can be done in a matter of minutes with it.  You can see the difference, done in about three seconds.  A whole towel is finished in less than one minute. 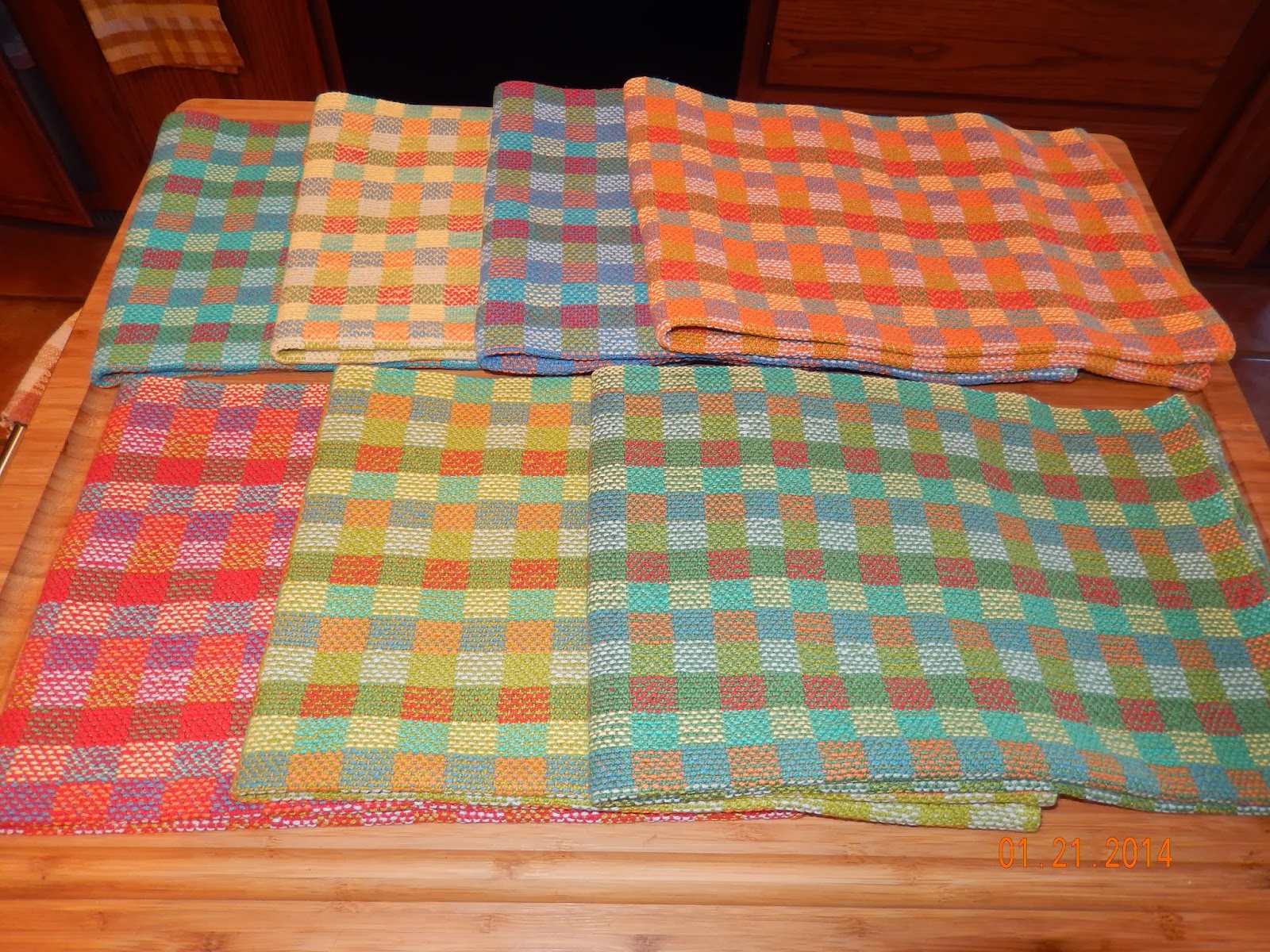 I still am in love with this draft - seven different towels from one warp!  So pretty. 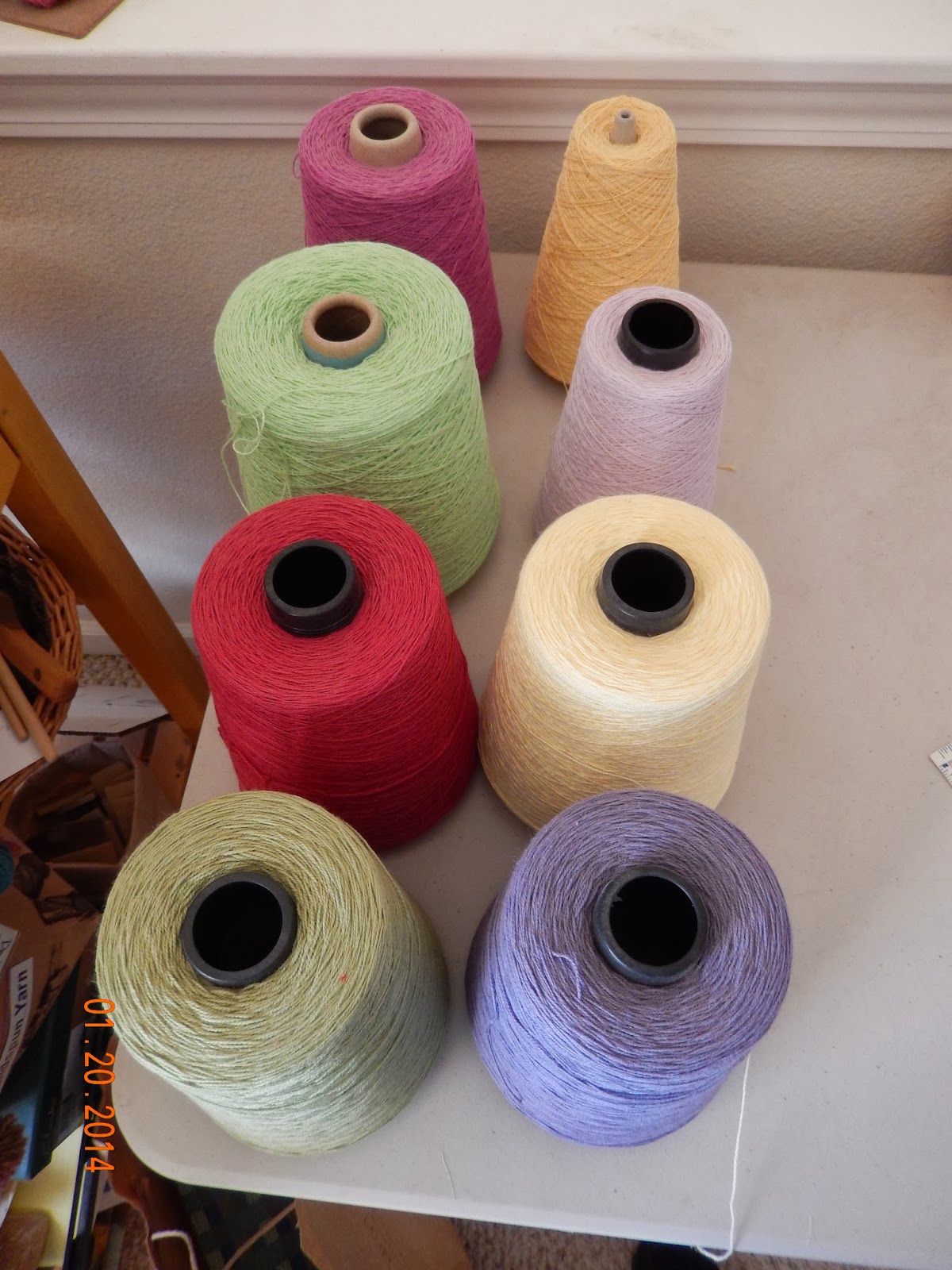 I've picked out these colors for the next set.  They make me think of spring flowers and after over two weeks of morning temps below 20, I'm thinking about spring.  I'll do two more sets so I have some inventory and then I'll try something else - finally. 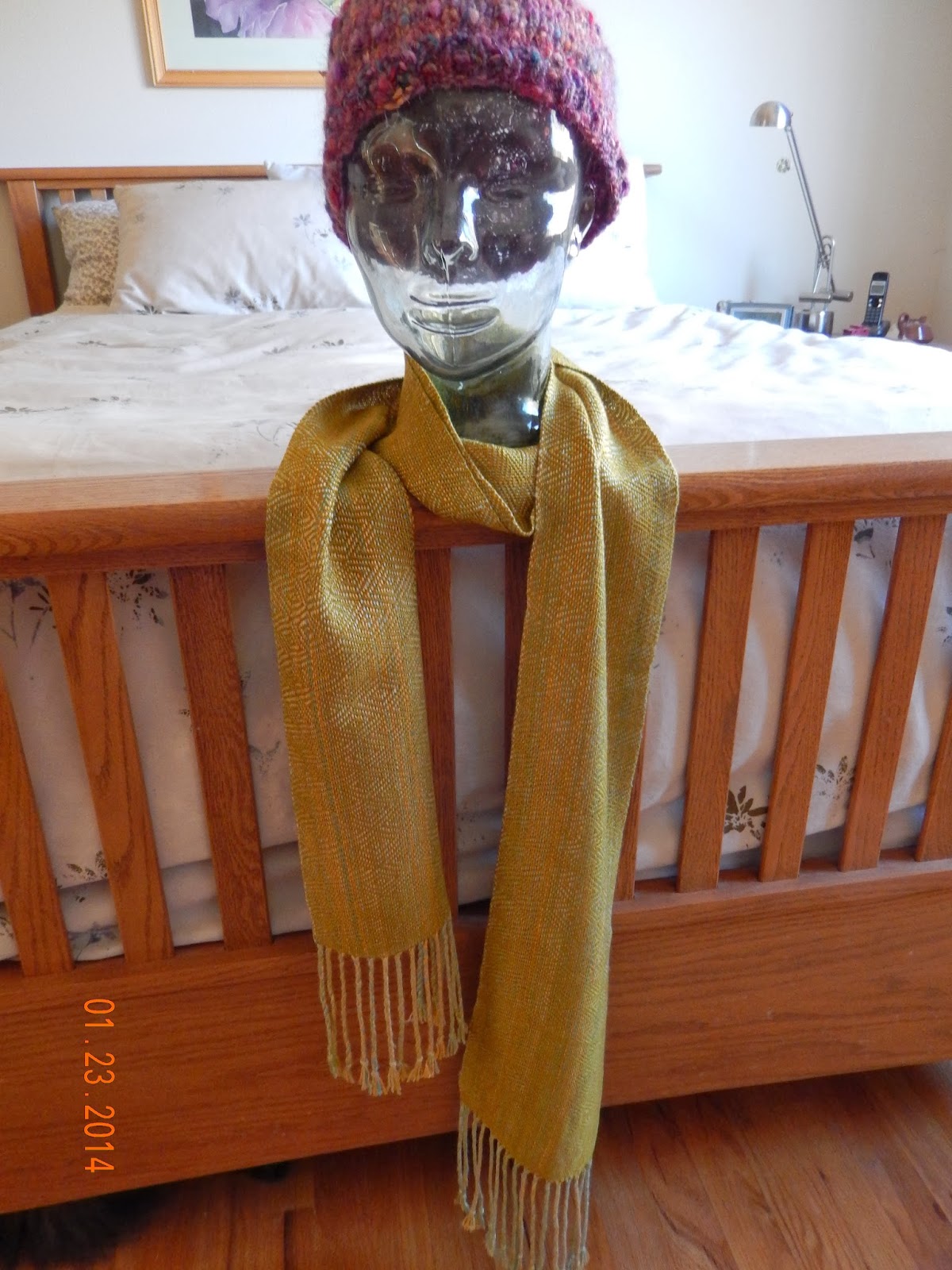 This is how my last scarf turned out.  I like the pattern very much and will use it again.  The warp was three-ply and made the scarf heavier than I would have liked.  I won't use a three-ply handspun yarn again.  Now I know. 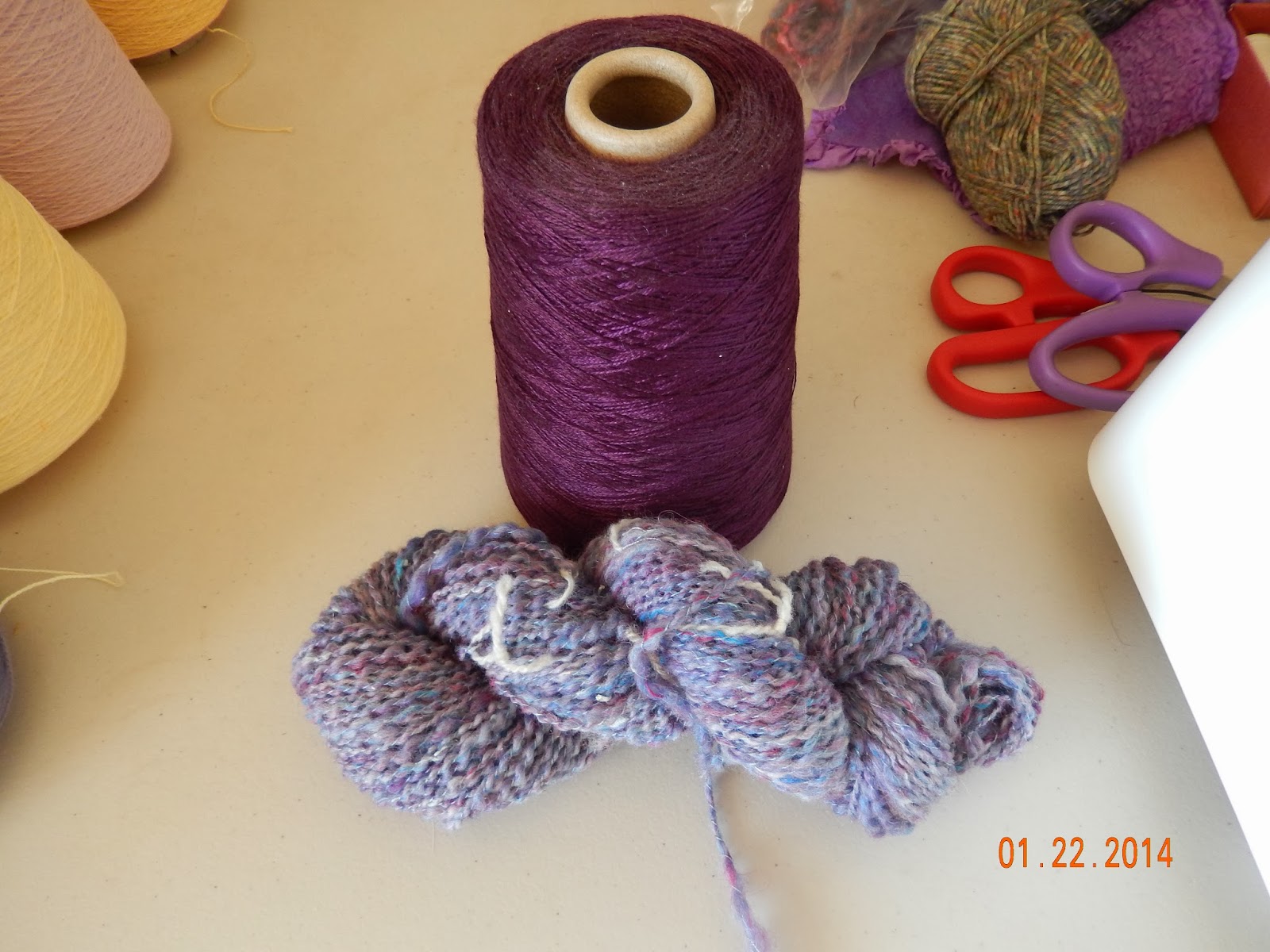 I finished spinning the batts I recently blended and plyed the yarn with 60/2 silk.  Currently that's my favorite preparation for spinning a warp yarn.  The only Tencel I have is this deep purple and I think it will dominate the warp.  I do have 8/2 cotton in lavender but I think I'll hold off on weaving this until I place another order with Webs and then I'll get a lavender Tencel. 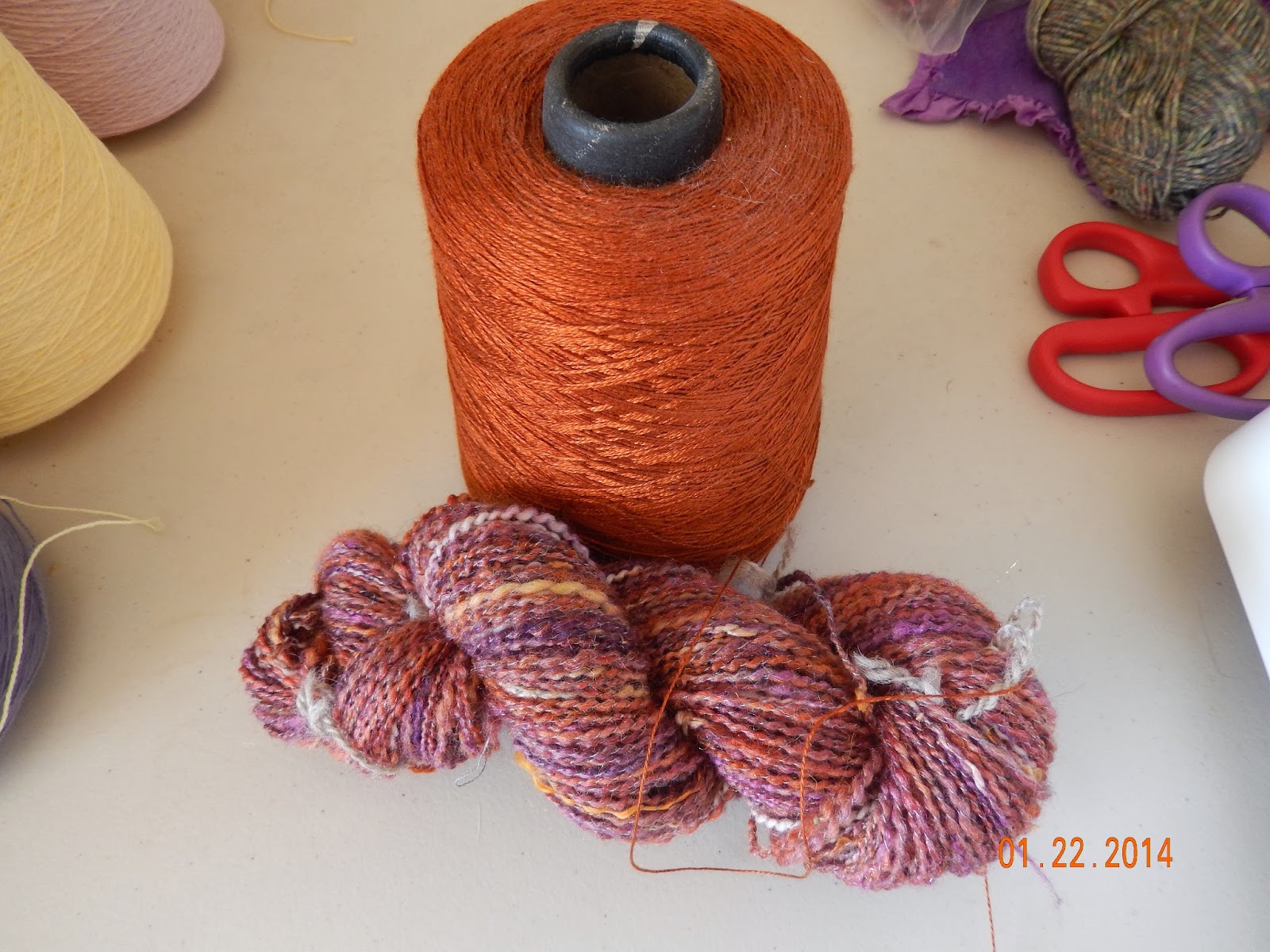 So the next scarf will be from these two yarns.  I still have a lot of skeins to experiment so holding off on the last one I spun isn't a big deal. 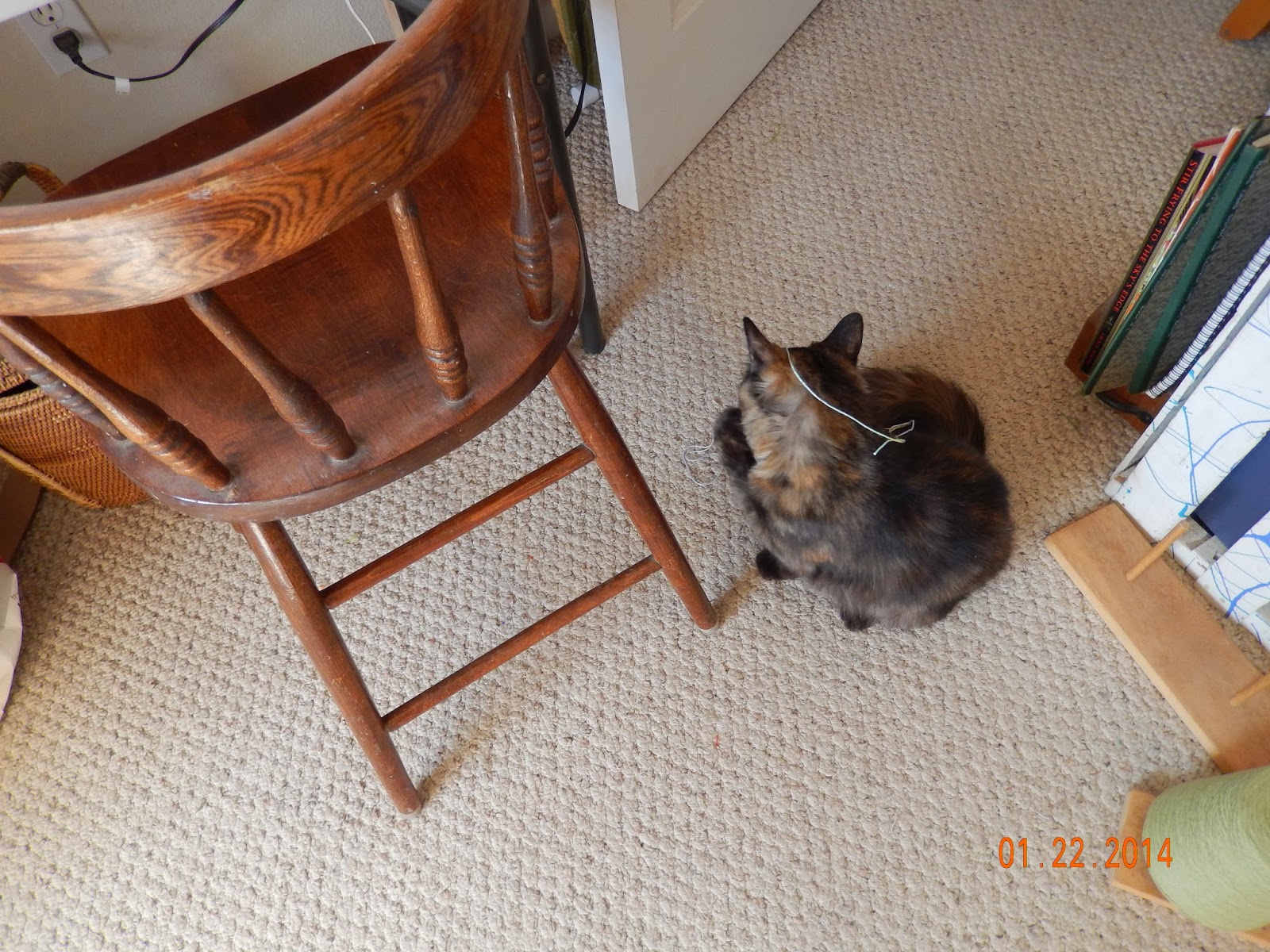 I finished winding both warps today with the assistance of my willing helper.  She loves my studio, which is why when I'm not in it, the door is closed.  She loves it very much.

We still haven't had any weather and the Sierras are now brown - in January!  I've never seen it like this in all the years I've lived here.  I'm trying not to obsess since there's nothing I can do about the weather, but thinking about this upcoming fire season is giving me (more) gray hairs.
Posted by Sharon at 3:27 PM

Love the towels.....I am very fond of that pattern as well.
glad you are recovering....

Those towels are beautiful! And I'm so glad you have a new weaving assistant. Very difficult to wind warps without someone on the floor managing the flow of yarn, even if there are wet stretches now and then.