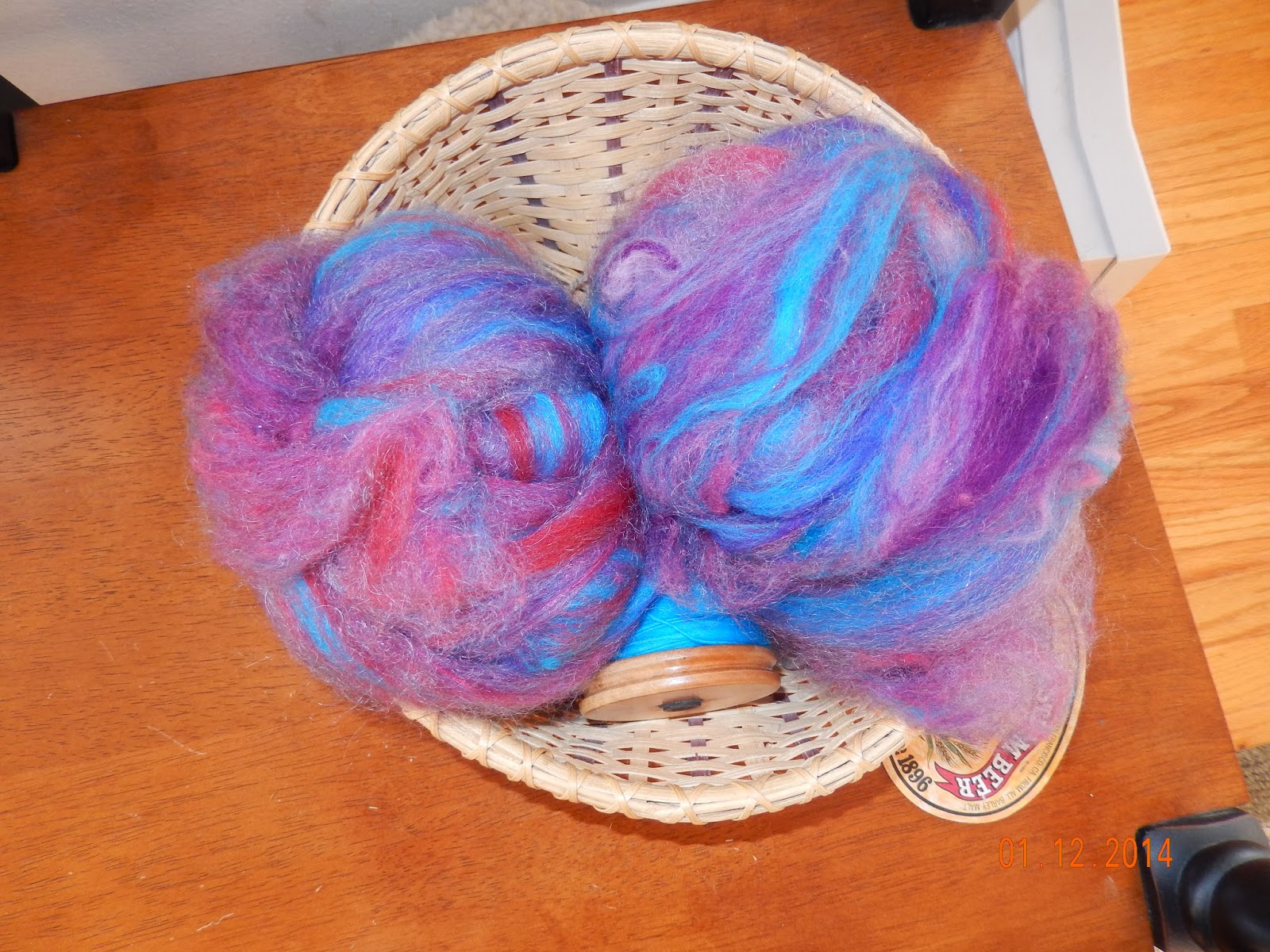 In my quest for interesting handspun yarn for warp, I blended together a couple of batts on my drum carder.  I sampled them on my wheel but they're just too neon for my taste. 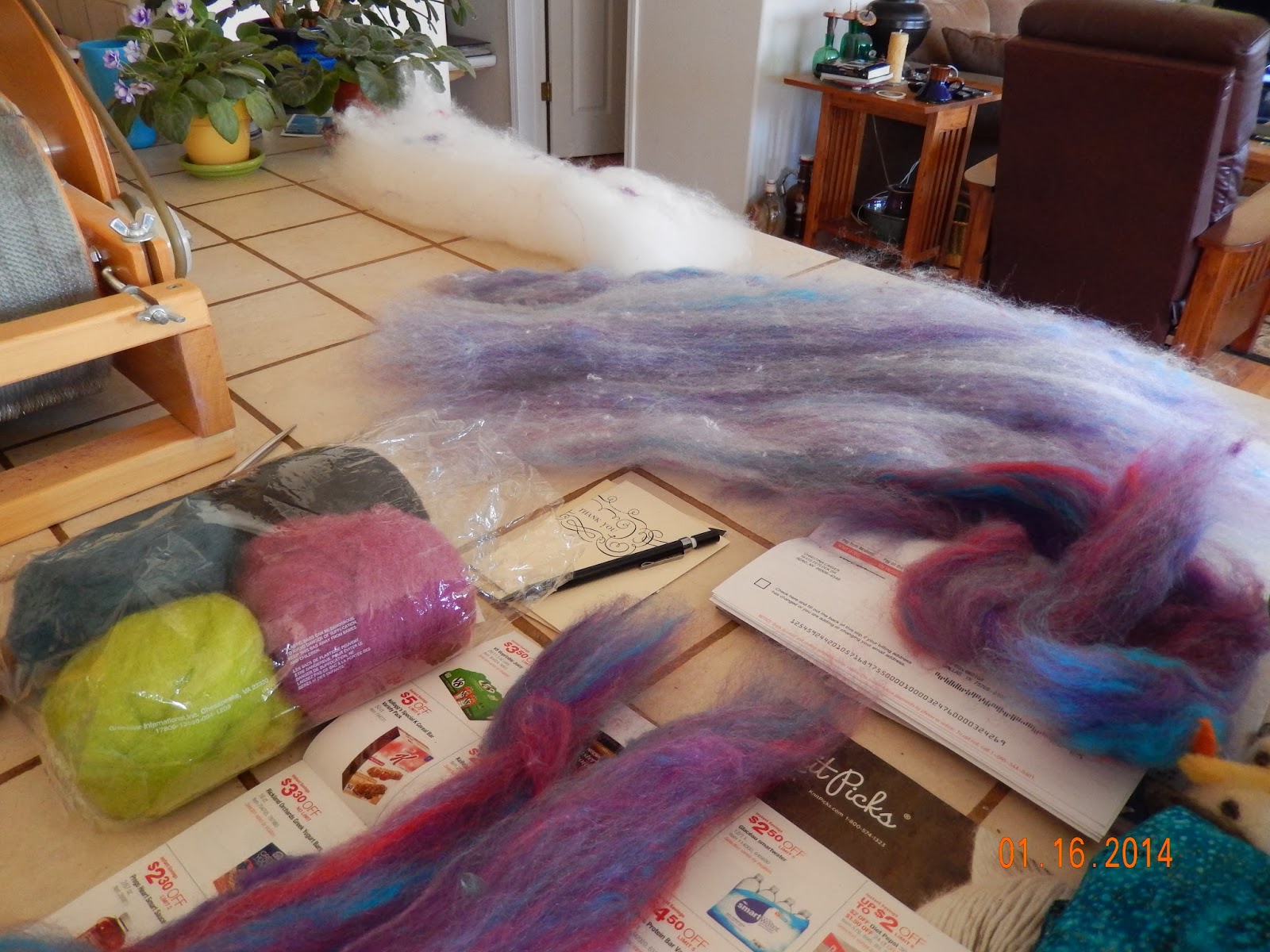 I carded up some white Cormo with undyed silk noil and blended it with the bright stuff, 50/50.  Partly I was experimenting.  The bright roving in the bag on the left is part of a program for the Conference of Northern California Handweavers called Return to Sender.  I had forgotten all about it but I signed up and paid in September.  Rae Stuart has been holding it for me ever since.  I stopped by Tuesday and picked it up on  my way to town.  My first comment was - Ugly!  Rae shrugged and said - or you don't have to do it.  I'm going to try to blend it into something else.  Last night Madeline found the bag, pulled out two bumps and mauled them badly.  She made the choice for me. 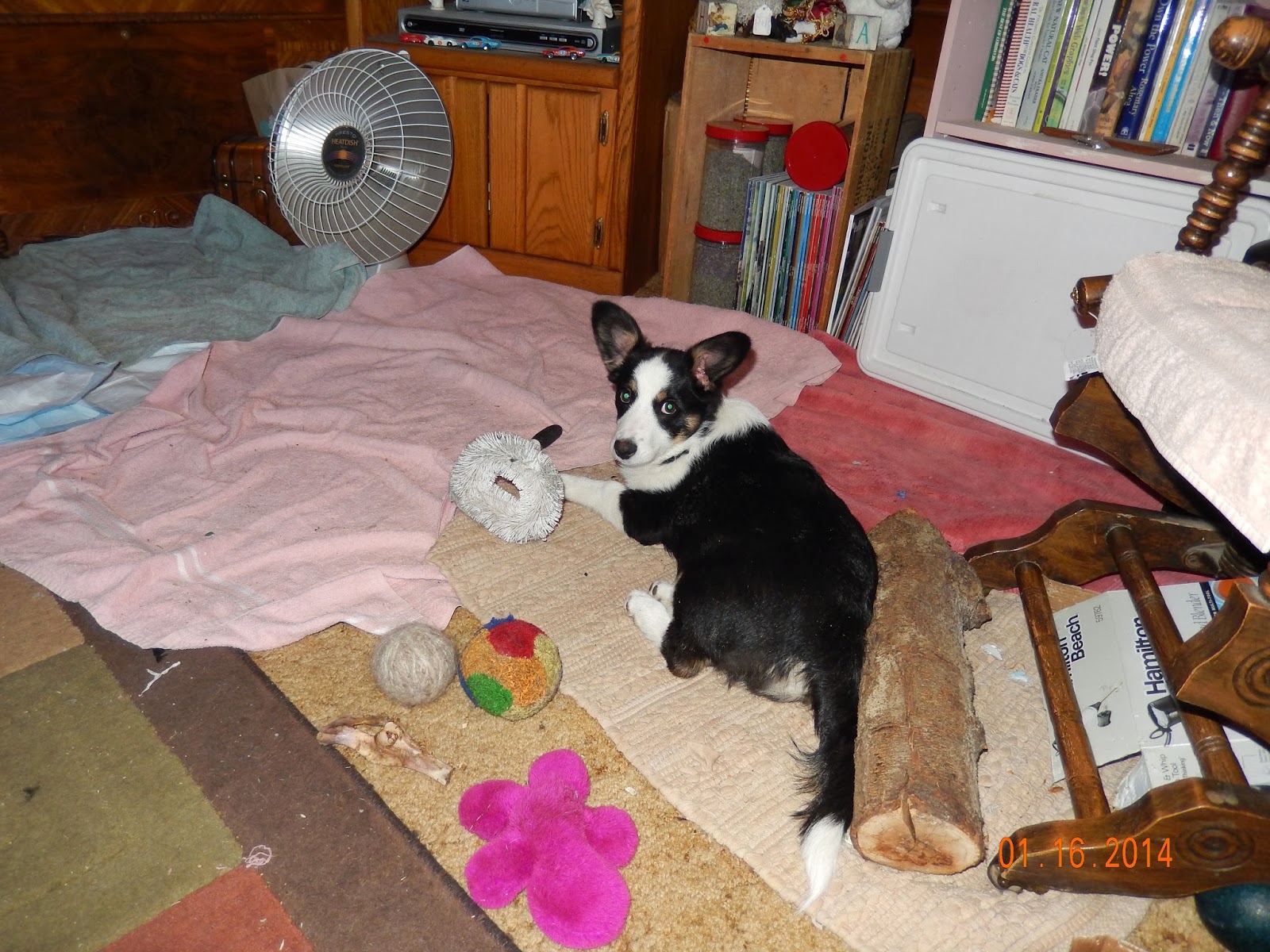 I went over to Mim's yesterday to buy eight ounces of BFL/silk roving.  This is her new puppy that she recently bought to replace her beloved JoBeth.  Her favorite toy is the toilet brush.  Guess what else Madeline found last night - my bump from Mim!  I can still dye it and it should turn out okay.  I think pulling the other wool out of the bag caused her to lose interest in my roving.  Boy did I learn a lot this morning. 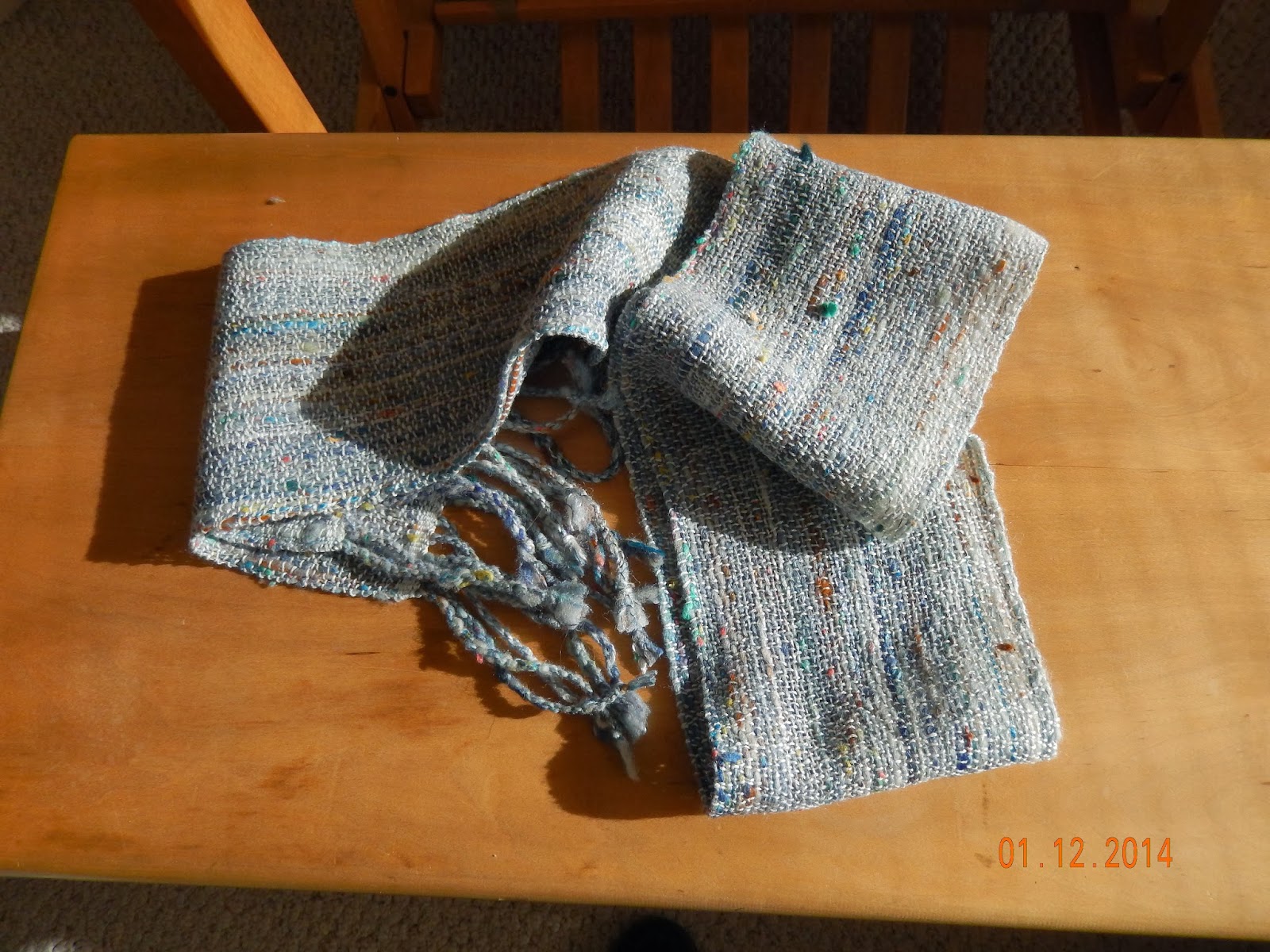 I finished another scarf with handspun warp.  This was spun from a Cottage Creation batt that I bought from Sue Flynn at Spindle Camp a couple years ago.  It was only 6" wide in the reed because that's all the yarn I had.  The weft is an undyed rayon/silk 20/2 and perfect for keeping the texture of the warp. 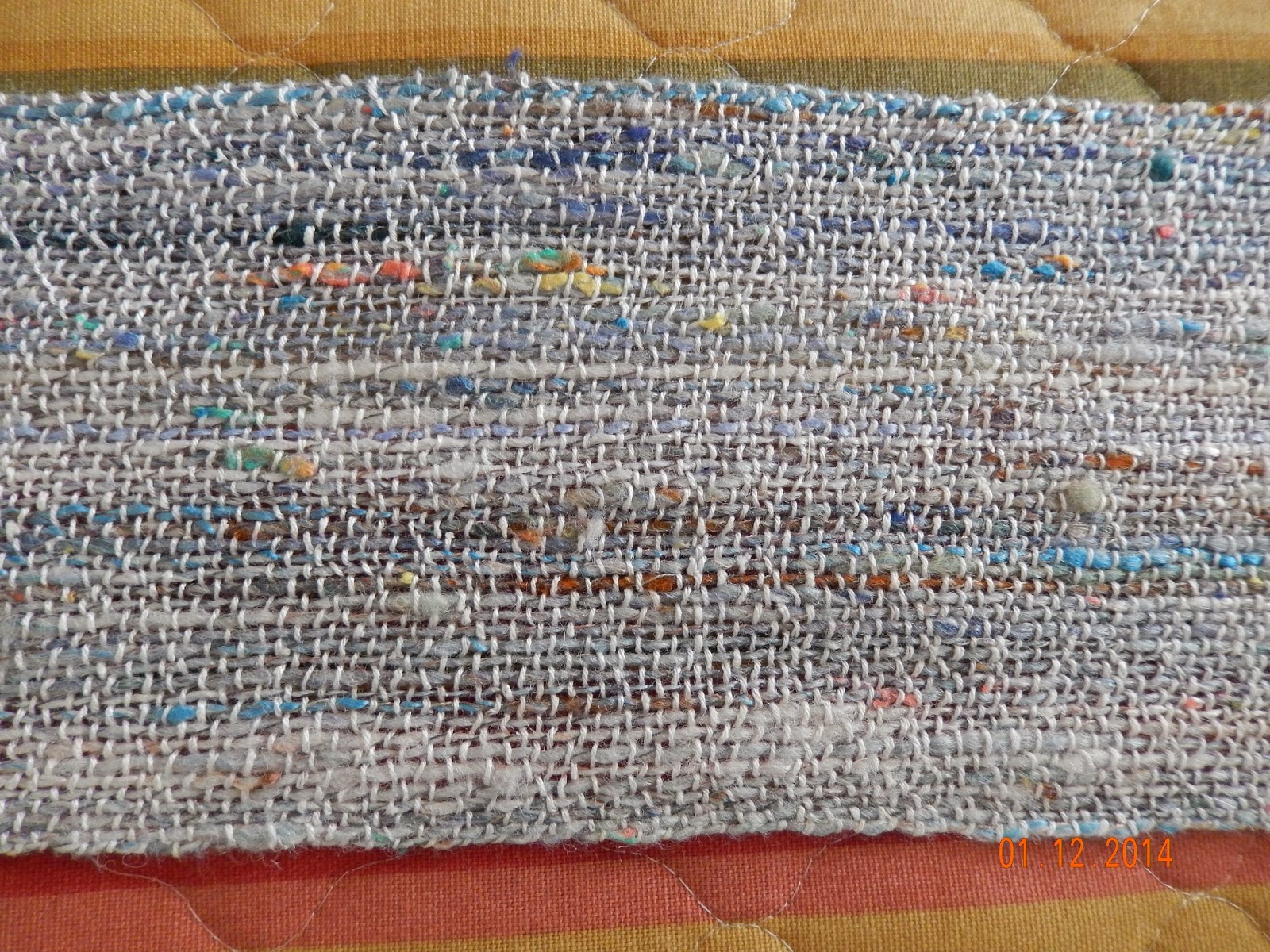 It turned out great and in spite of the wool warp, it's not scratchy on my neck.  Again, the sett is the same - 8 epi and 10 ppi.  It requires crazy batts to make a yarn like this and I either have to buy them, invest in a different drum carder or just do something else. 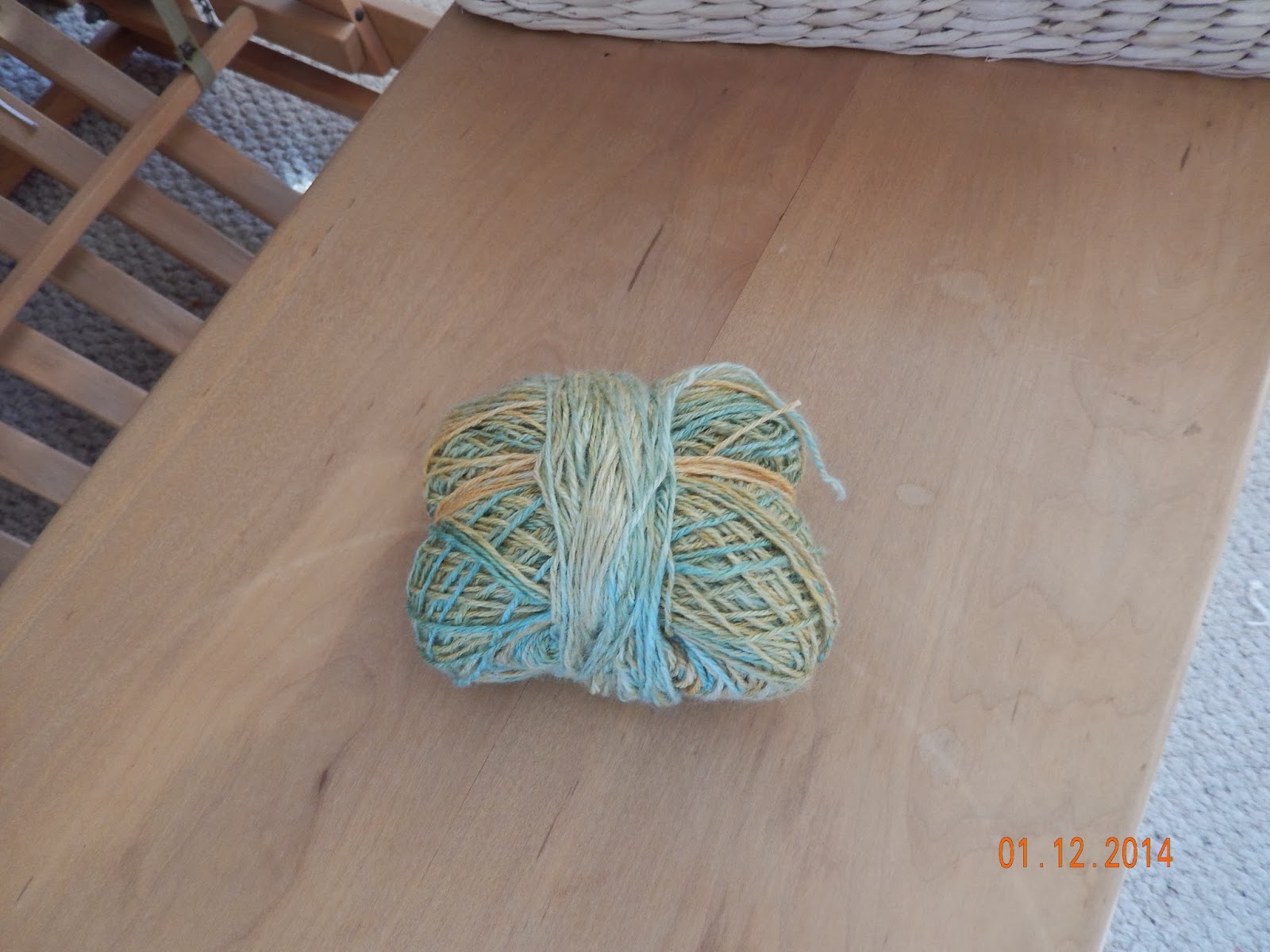 I'm going through old balls of handspun, one at a time as I experiment with scarves.  I'm calling this experience my scarf boot camp.  I dyed this silk and then Navajo plied it.  I'm not sure what happened because it's not shiny.  It's either use it or throw it away. 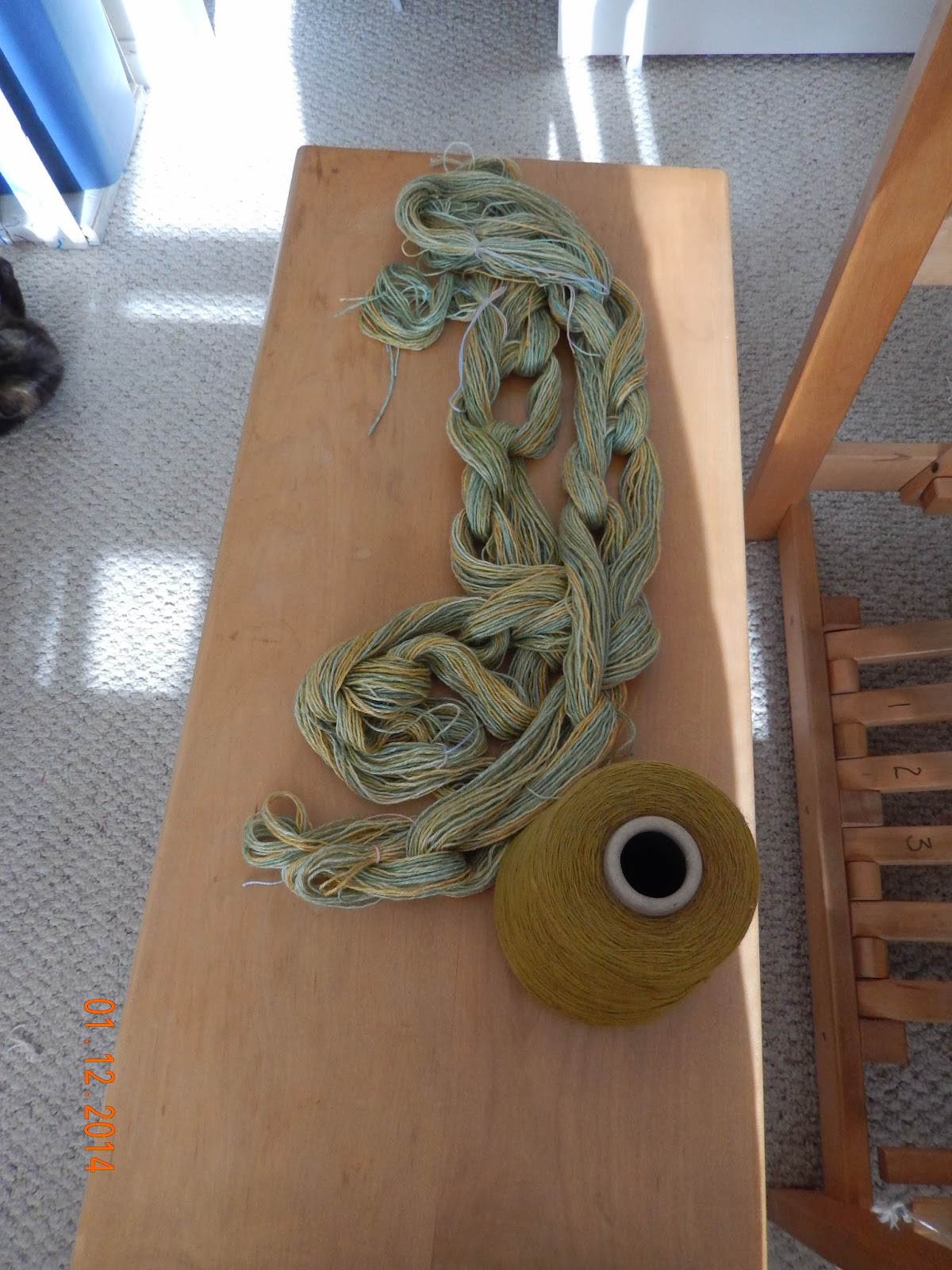 The weft is a bronze 8/2 Tencel, not quite a color in the warp chains but it's what I have.  That's the way we do it in boot camp. Use it or lose it. 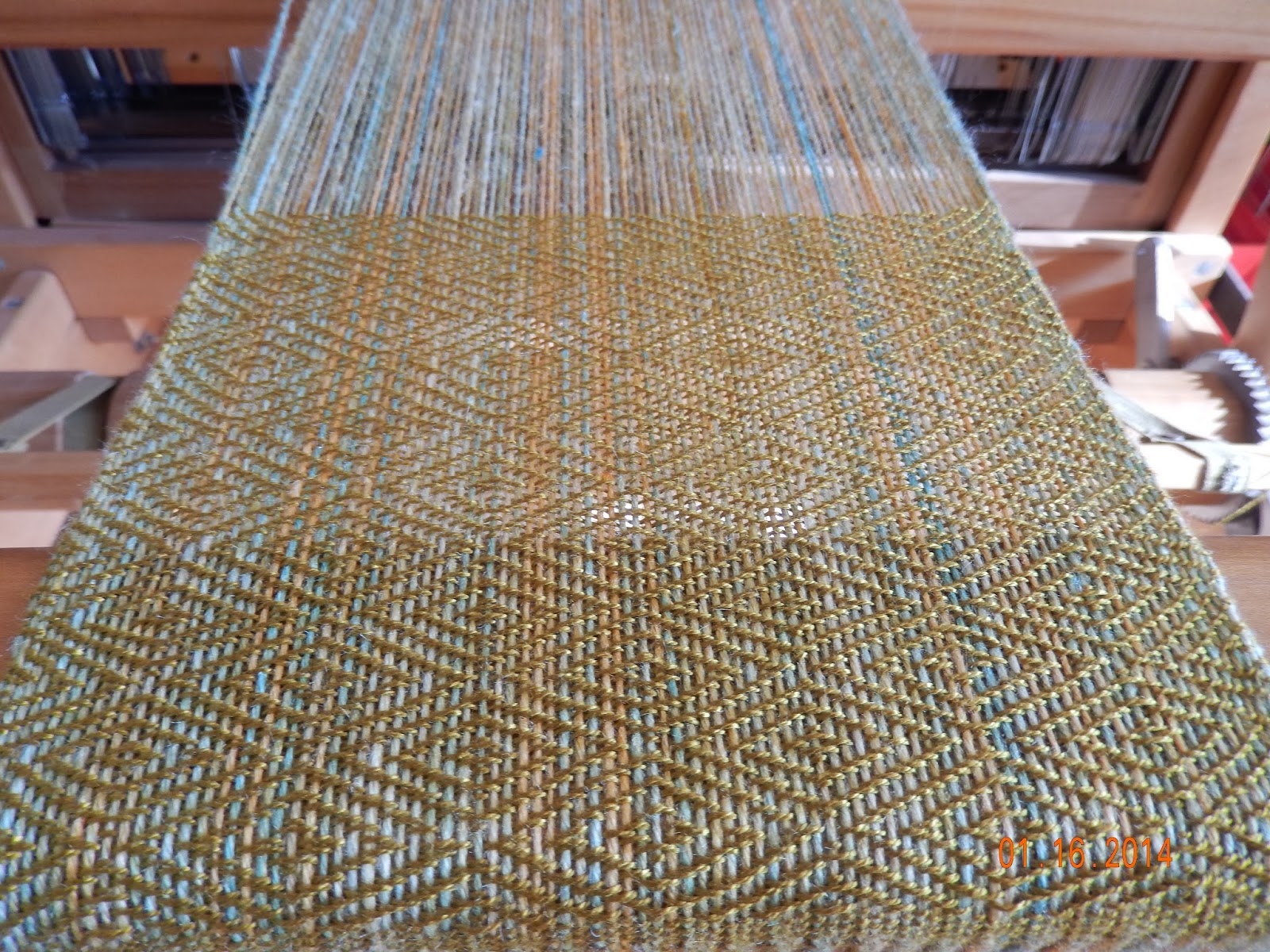 This is the beginning.  I'm using a point twill from Anne Dixon's book, p.90.  I used it before but didn't see the note for repeats of the pattern.  It's much nicer done according to the pattern, though I have a hard time keeping track of where I am and it's hard to beat consistent.  I set it at 12 epi and have no idea what the ppi is, though I'm going to measure it soon - any day now. 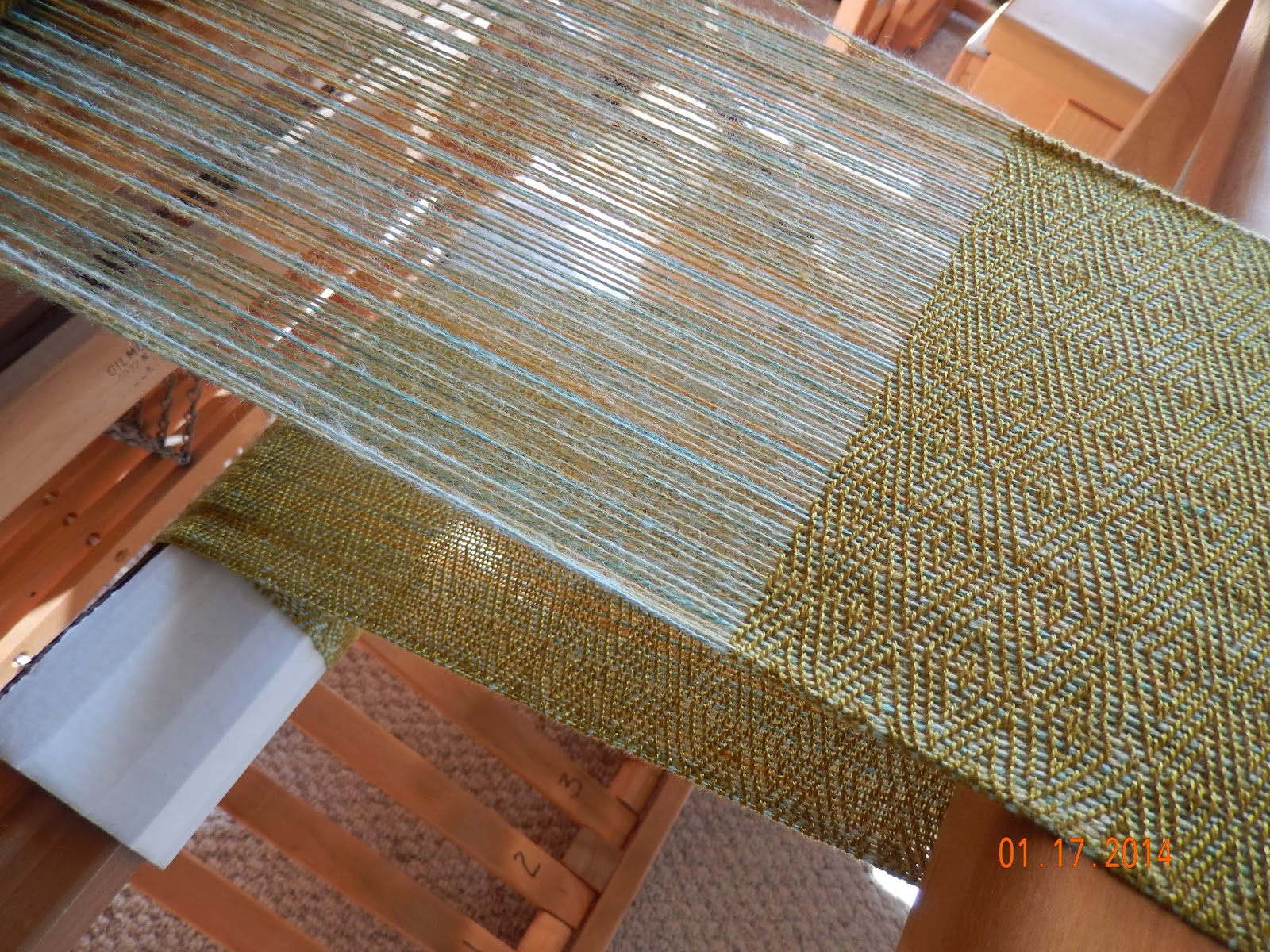 This is the photo I took this morning.  You can see that I'm having a hard time keeping an even beat.  I don't know if some of this will clear up when it's washed and finished.  I've never done this before so it's just part of the curriculum.  I've had to back off on my studio time.  I'm enforcing two hours and even that might be too much.  I'm still weaving towels on my big Bertha, almost done.  What that has done for my shoulders is immeasurable.  Six weeks ago I could hardly pull off a t-shirt, but now that's just another bad memory.  Now I'm all about building good ones.