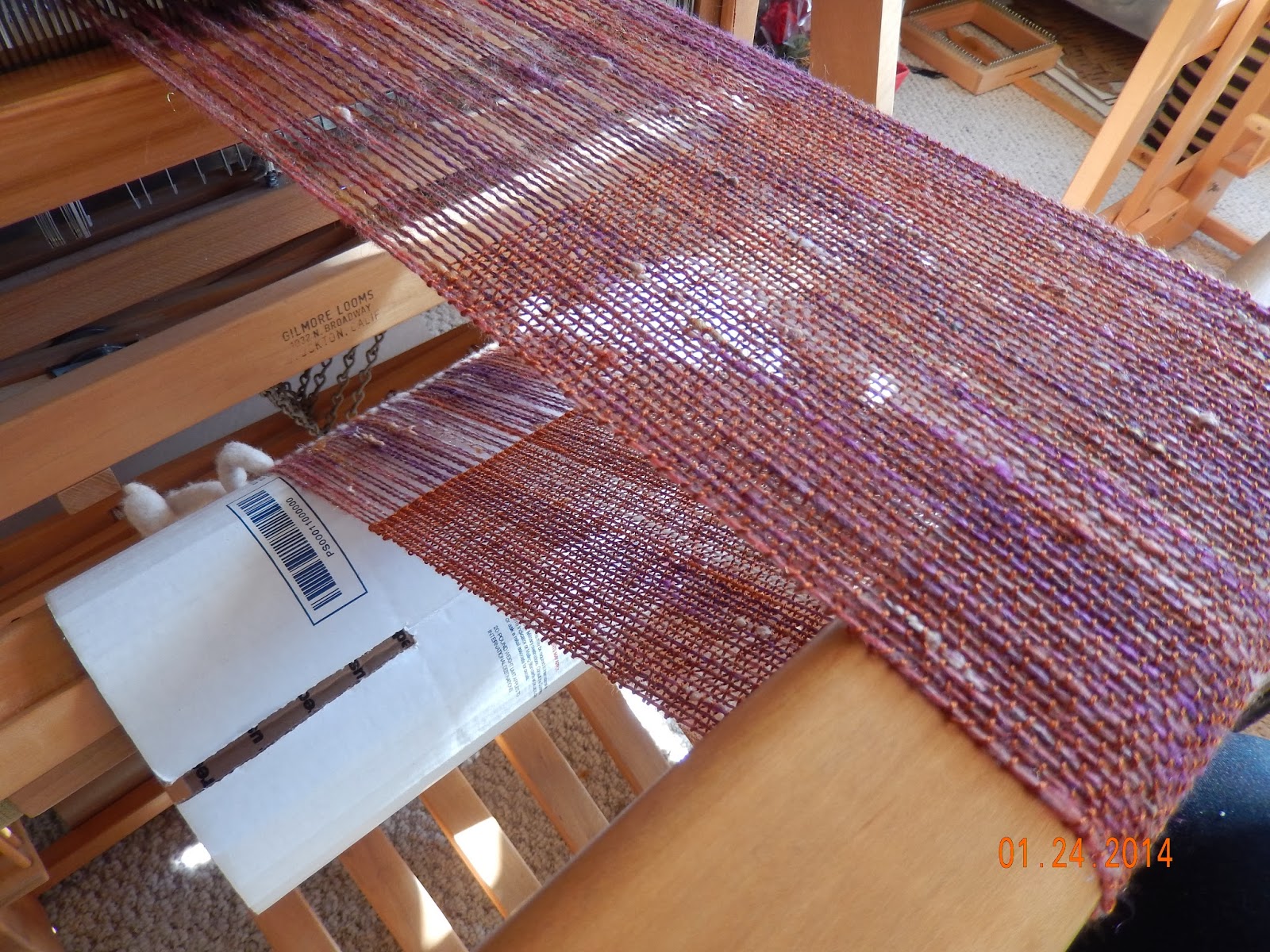 A scarf weaves up pretty quickly when it's woven so loosely.  Half of the time invested is in blending the fiber and spinning it.  I tried to weave the weft a little more tightly but I seem to have found a groove.  At least I was able to keep it standard this time. 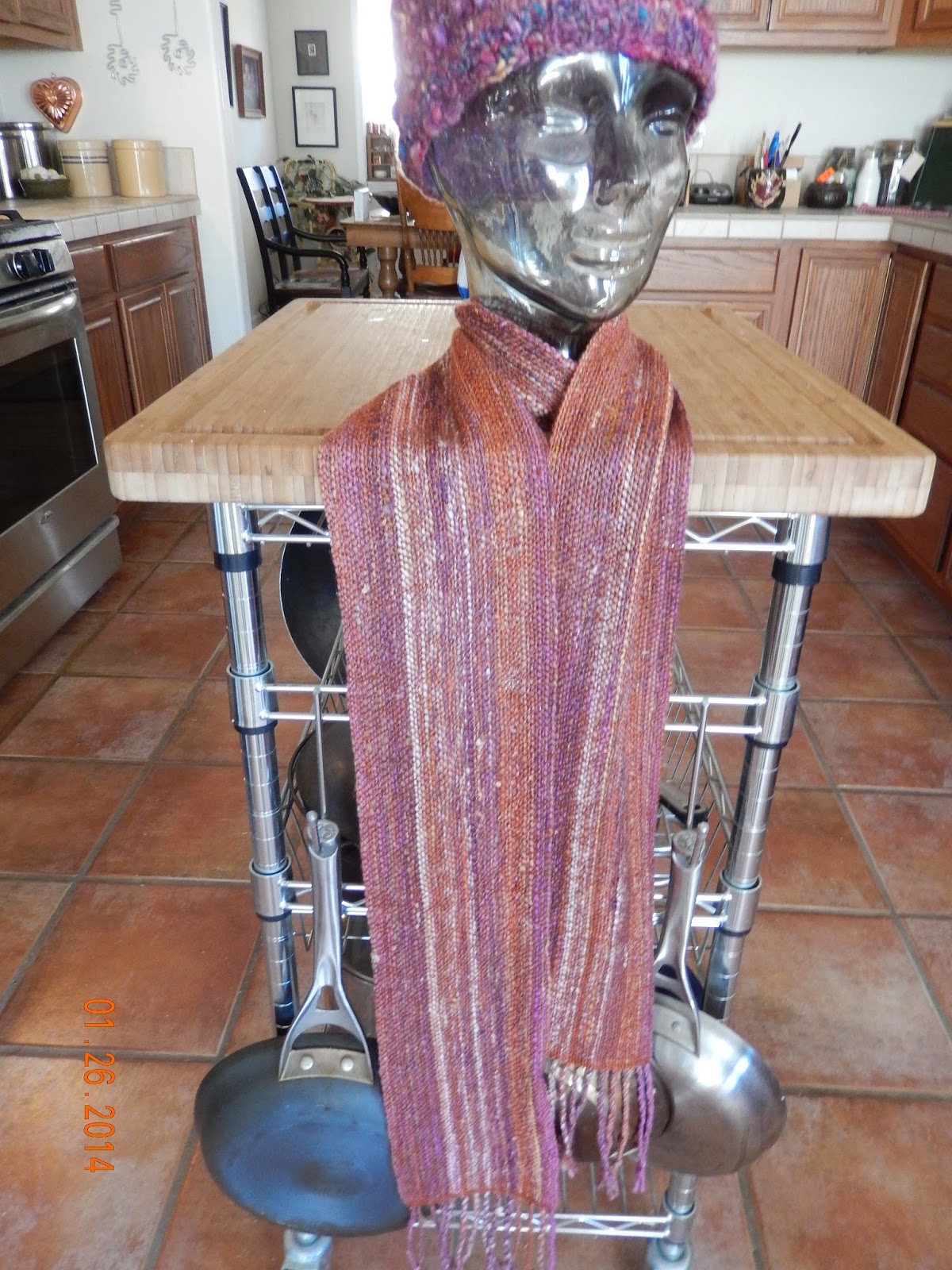 And here it is finished.  I could not be more pleased! 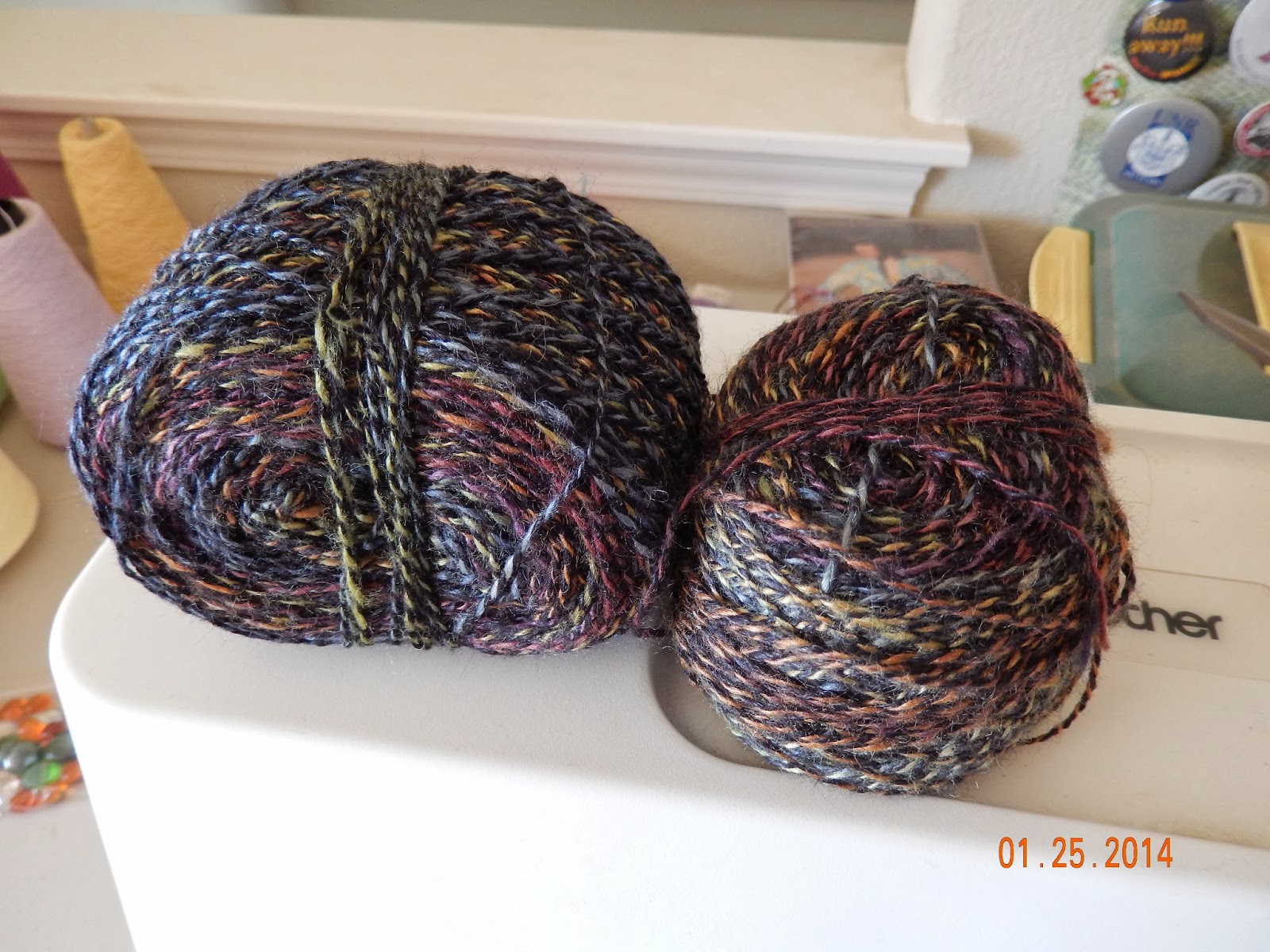 This is the next handspun yarn that I'll use for a warp.  I made it so long ago that I can't remember anything about it.  I think the colorful part is silk that I won in a raffle and the black I plied it with is alpaca - not sure. 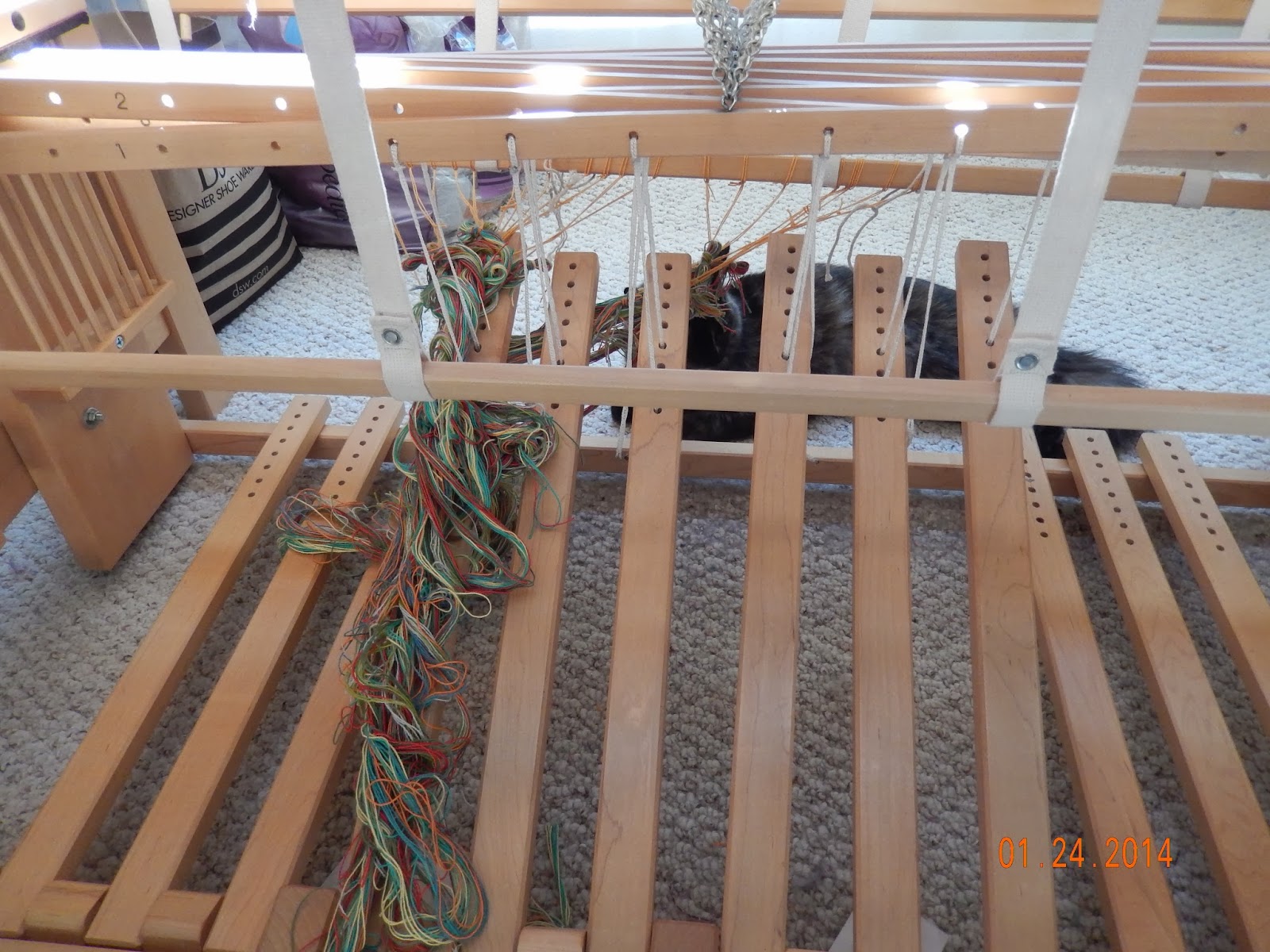 I wanted to clean off the loom and warp it for the next dishtowels.  Maddie dragged all of this waste to the front of the loom and then was protective and resentful while I was removing it.  She made a big mess and she has claws. 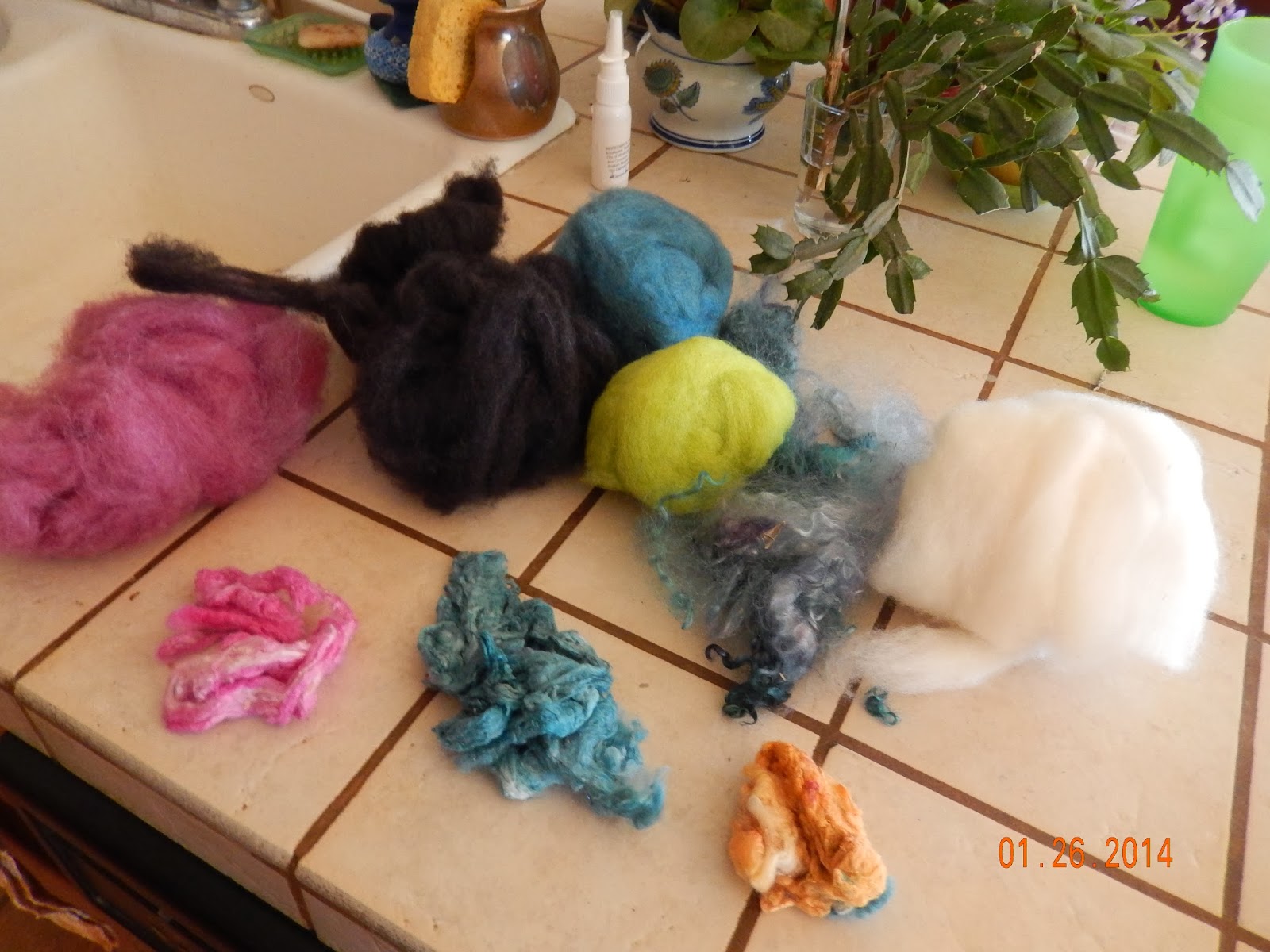 I really need to pay attention to the spinning challenge for the Conference of Northern California Handweavers guild in May.  The deadline to return the skeins is looming and my enthusiasm just isn't there. The chartreuse, pink, blue and black are the base fibers, 2 ounces altogether, and they don't enthuse me.  We're challenged to spin them and return the yarn.  The second phase comes next year when we use the yarn in a project where it is the predominant feature.  I'm adding mohair locks, silk noil and undyed Cormo. 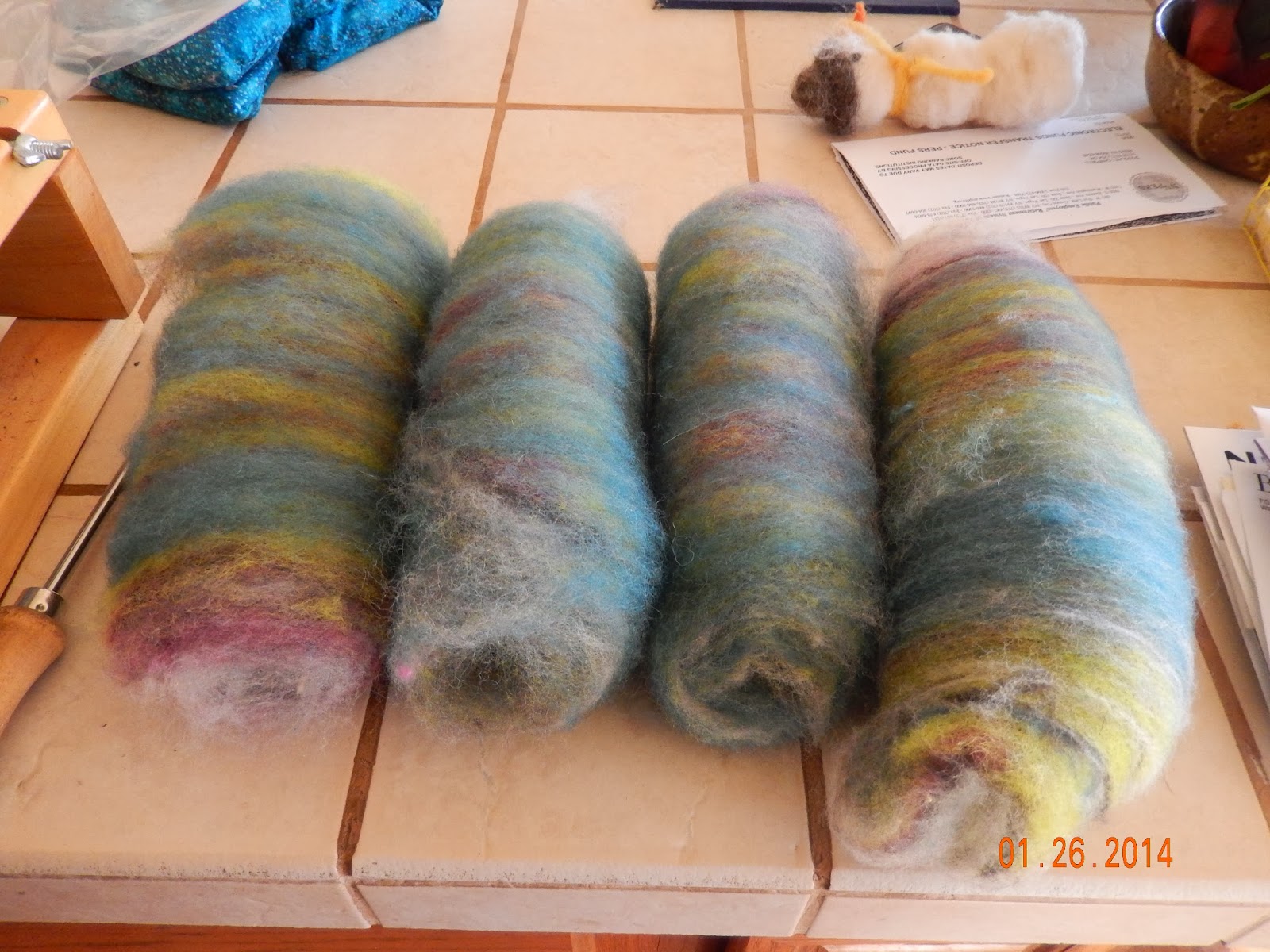 I have a Patrick Green Deb Deluxe drum carder which is for blending fibers.  It's not so good at making art batts.  I probably was a little over obsessive to make all the blends the same but after all, I am submitting it to be judged. 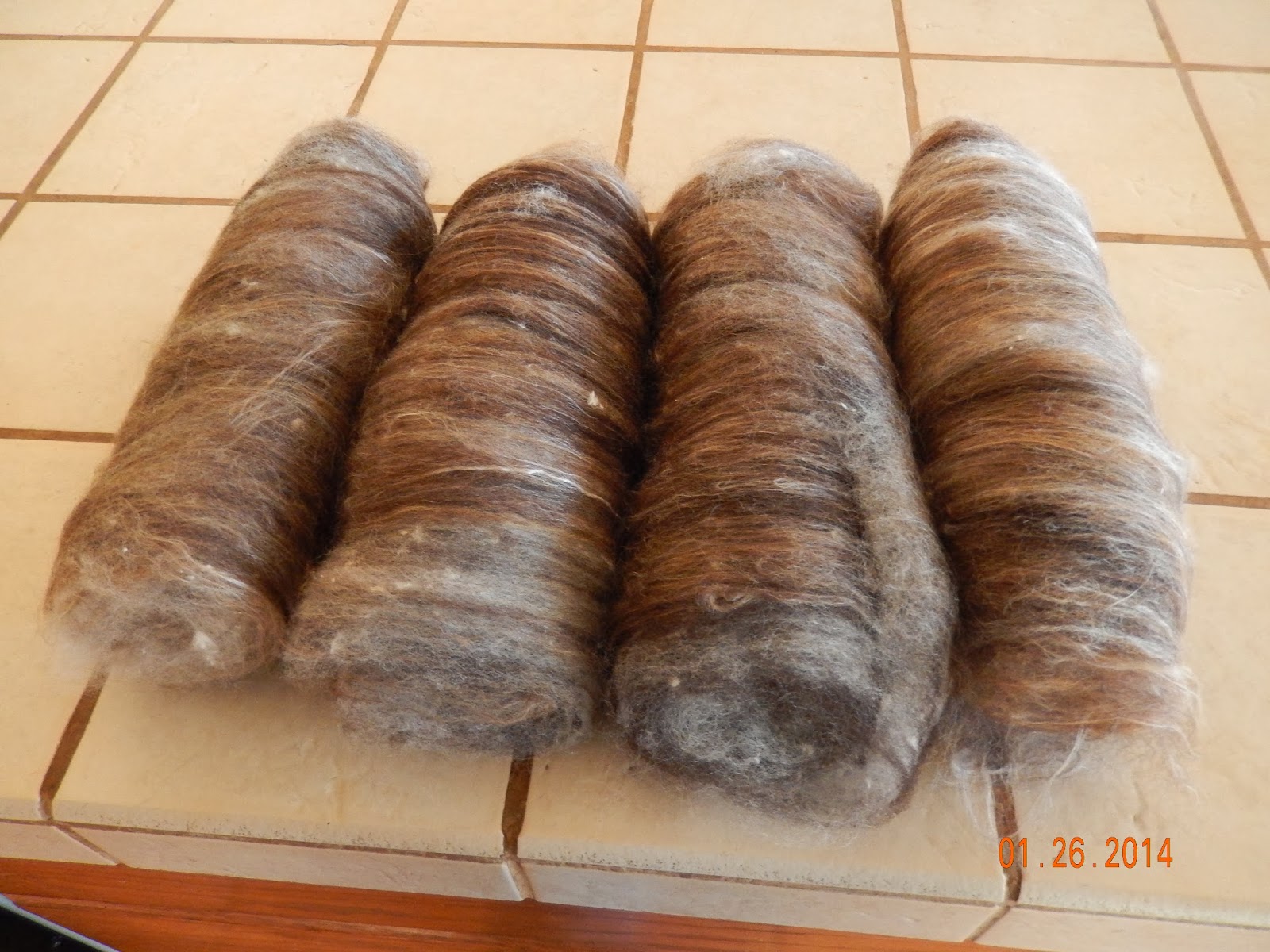 While I had everything out and the kitchen covered, I made a second set of batts for me. 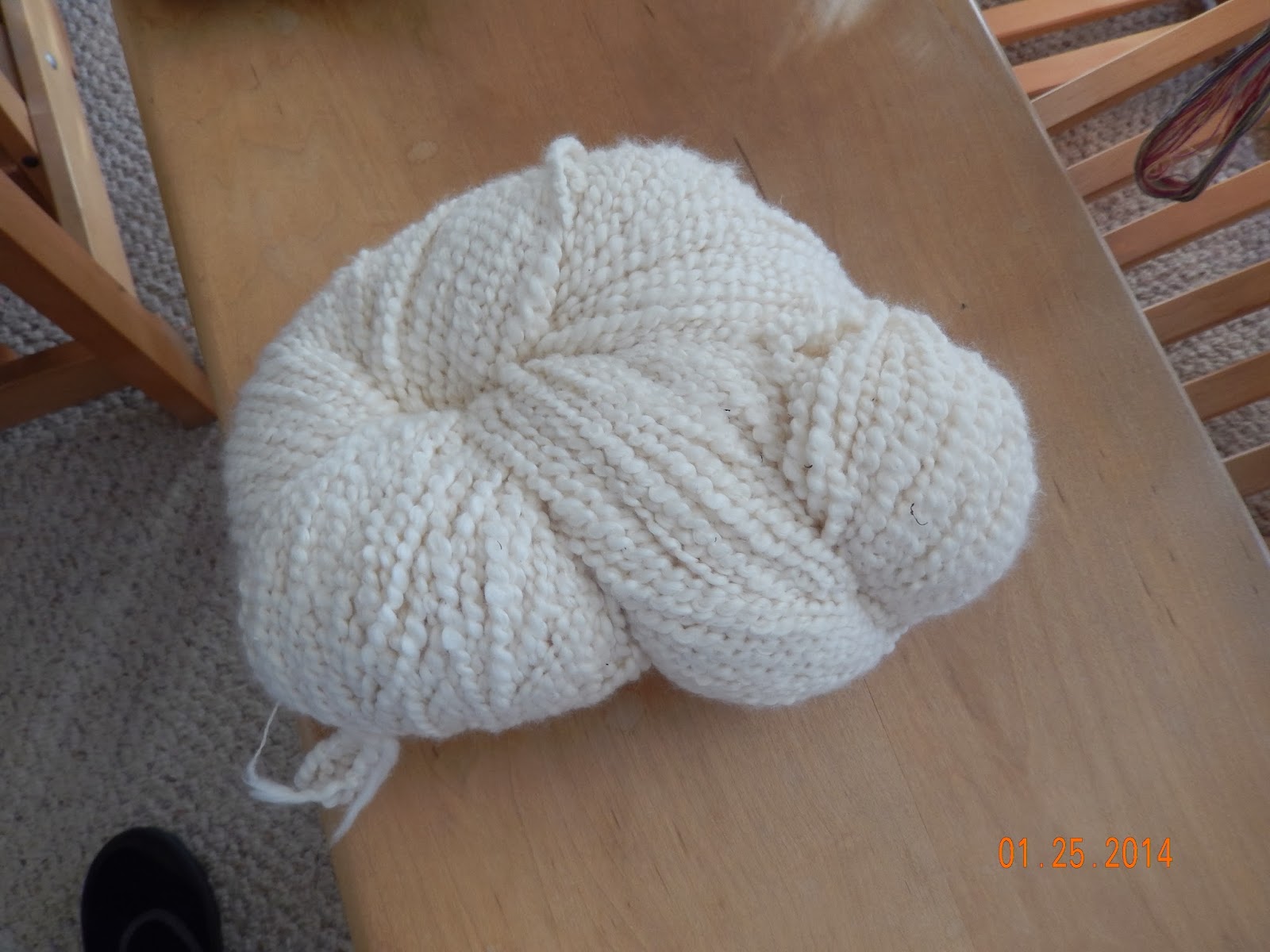 Melissa left three of these with me last summer.  There's no label so I decided to do a burn test to see how much of it is synthetic.  It's a good thing I did it in the sink because it went up like a torch.  All cotton!  Cotton and linen are the most flammable of yarns. 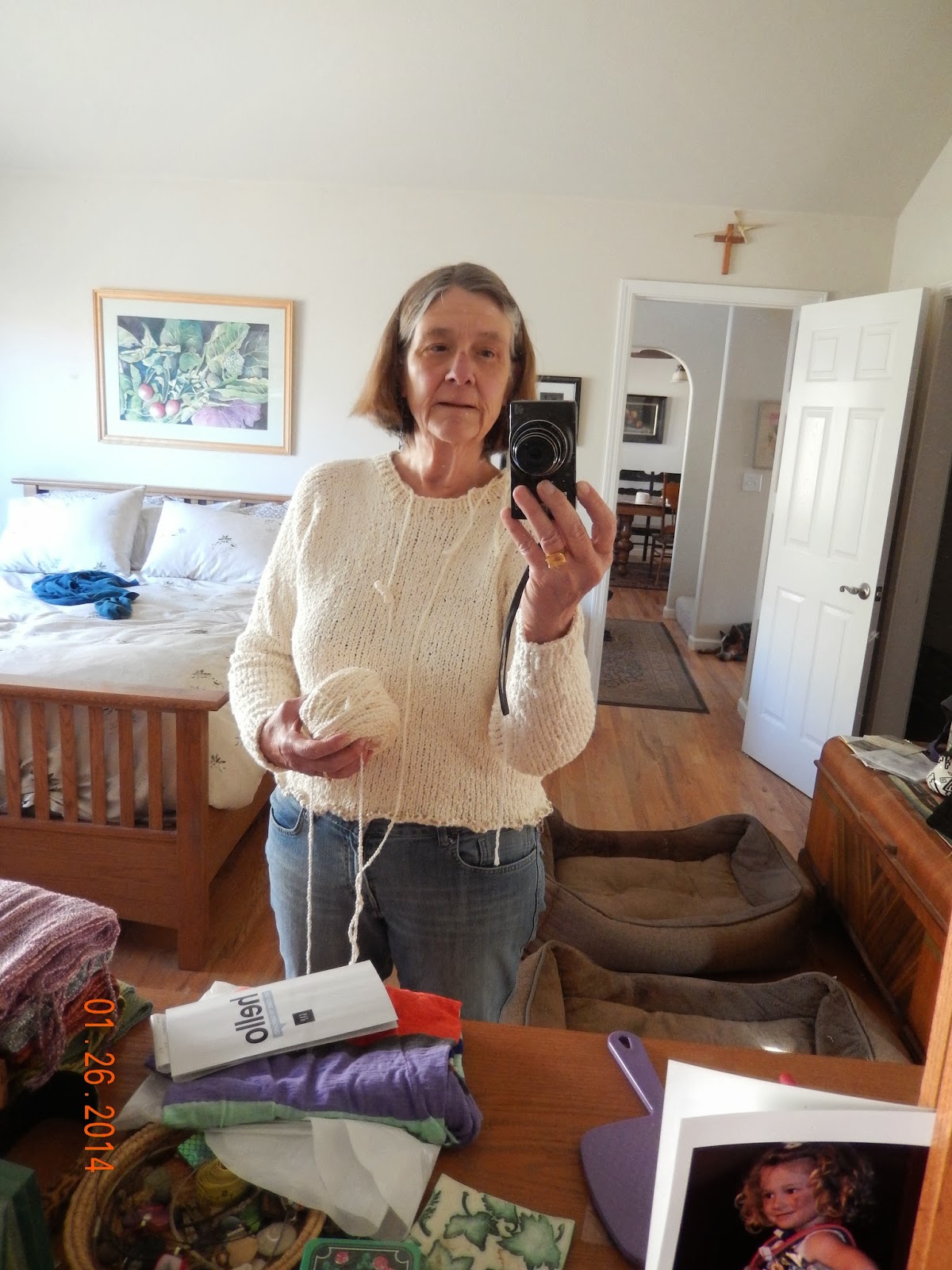 I've been knitting on this pullover but I realized that if two of those skeins got me this much sweater, and I still have some left, that I probably can make a sleeveless shell for summer with the third one. I'm going to cast on this afternoon so I can knit on it while I listen to the president's address tonight. 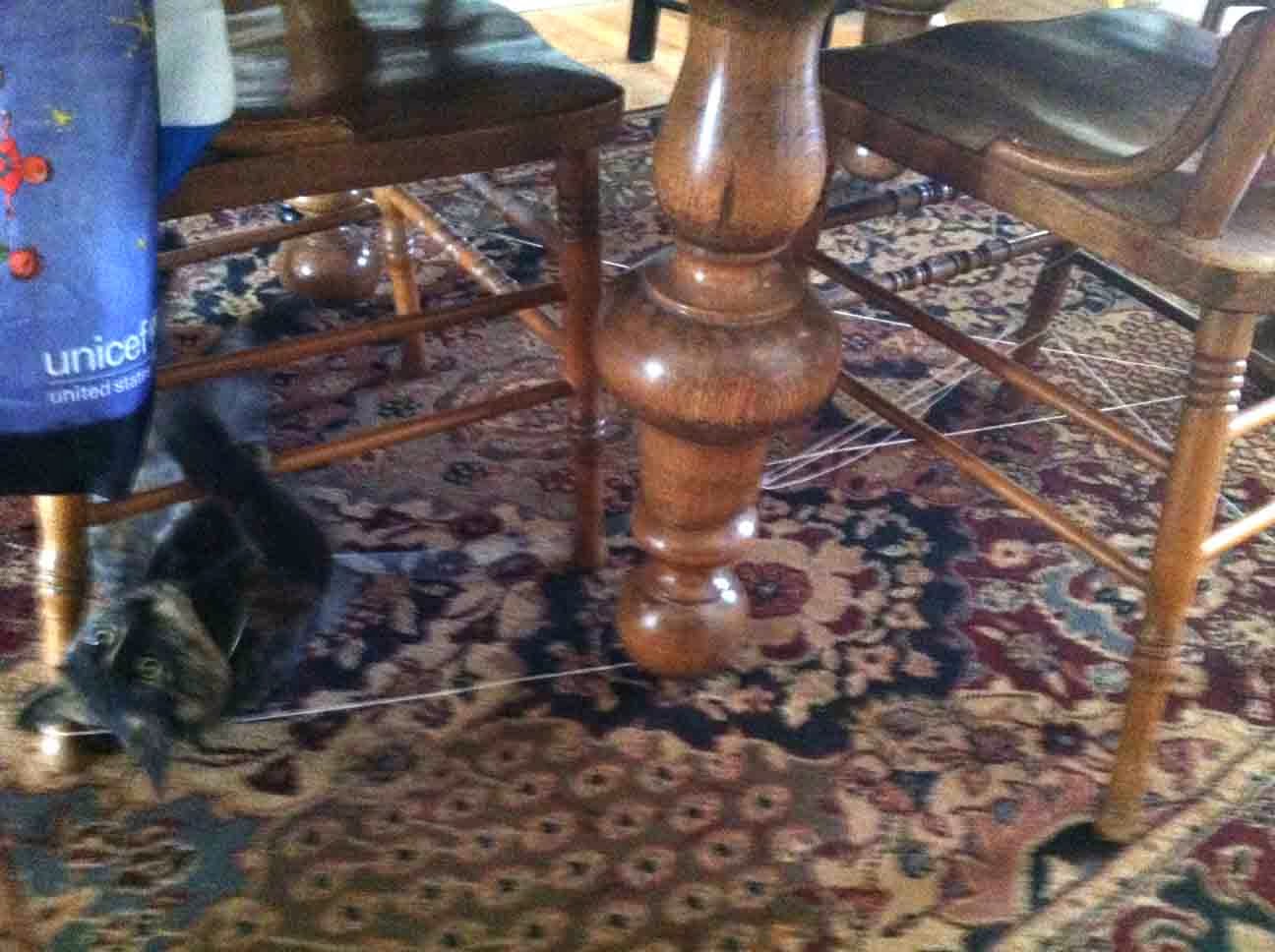 Maddie loves little things she can carry around so stole an end of a 8/4 cotton warp spool and this his what she did with it.  Think she can blame the dog? 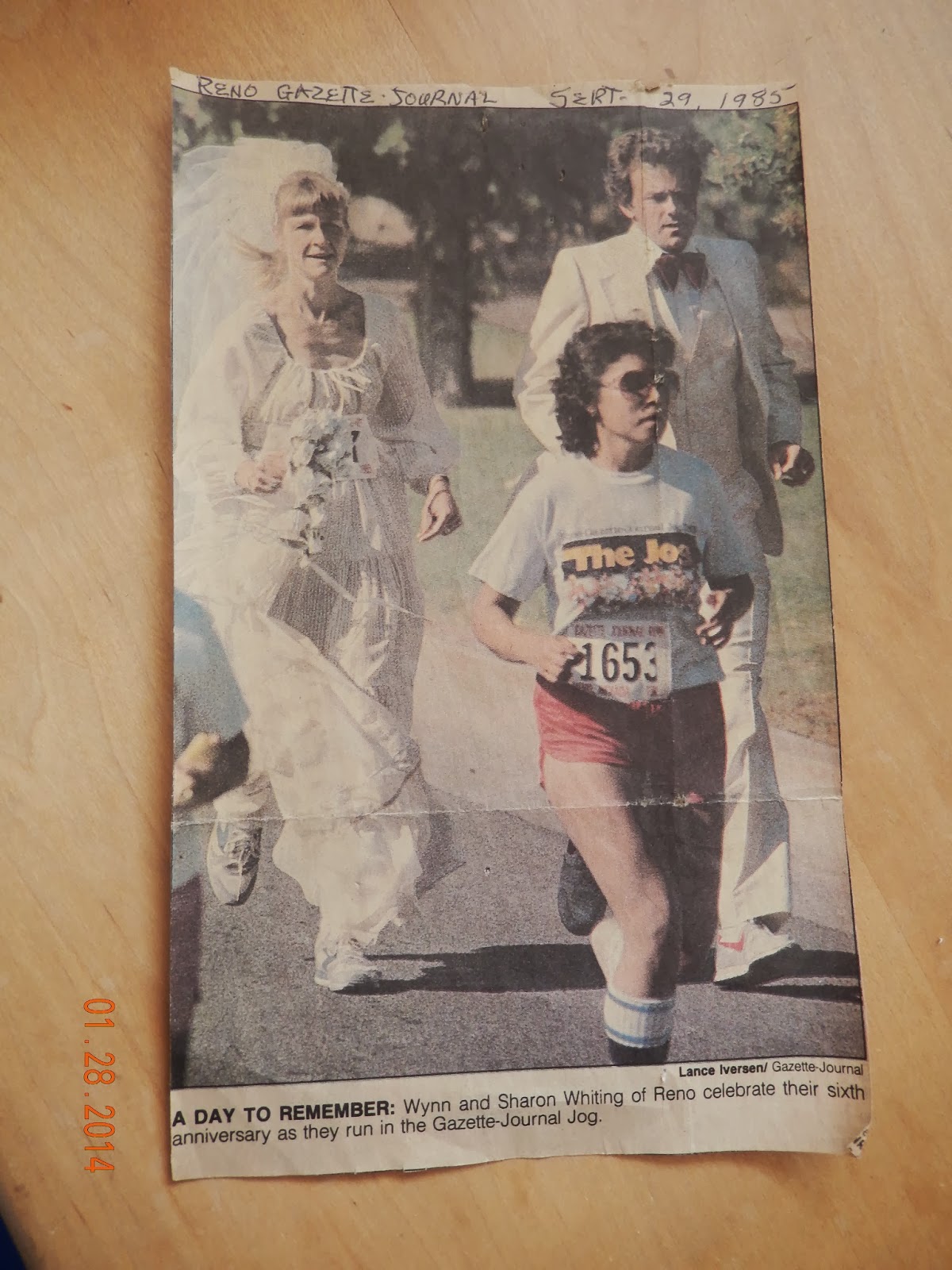 Today was about paying bills and filing paid bills.  But there's no more space and there was no way around it.  It was time to shred the stack of past payments that I've shoved into the secretary, to the point that I no longer can close the door.  And then I came across medical statements that needed to go in the filing box upstairs, but it's heaped because there's no more room.  Three hours after I started this whole thing, I had made another bankers box and split up the files.  I came across this and had to smile.  Mother had cut this from the newspaper and this taped to the wall in her kitchen.  Across the top she had printed, Reno Gazette Journal, September 29, 2985.  Yup, that's me running the Journal Jog in a wedding dress.

And why were you running in a wedding dress???

I remember that black alpaca/multi-colored yarn. I think I suggested that you ply it with black. Didn't you make a hat or something out of some of it? You definitely need a black weft for that one!!

The scarf is really nice! I'll bet it's light as a feather.

I remember you showing me that picture, too! How funny to see it again.

I also love your coloured batt.

LOVE your new scarf!
will you dye your sweater or your shell once you are done knitting?