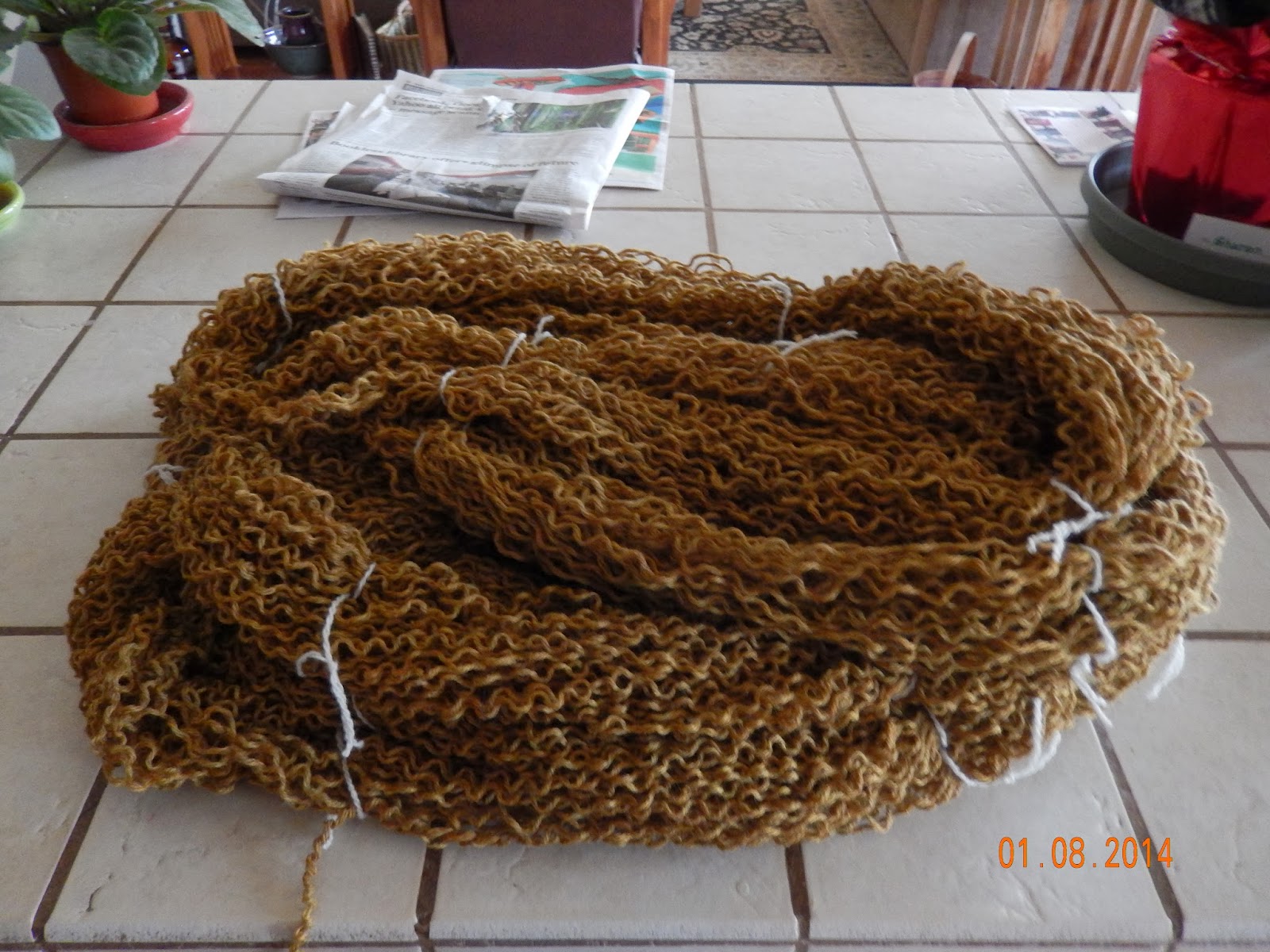 I knit up a pullover sweater last year from Cascade 220 and I never wore it one time.   I decided that the perfect solution to this sweater is to pull it out and start over.  I tried to sample it all krinkly like this and couldn't get an even measurement.  It was an ambitious endeavor but it's washed and reskeined, which wasn't easy since Maddie wanted to help me. 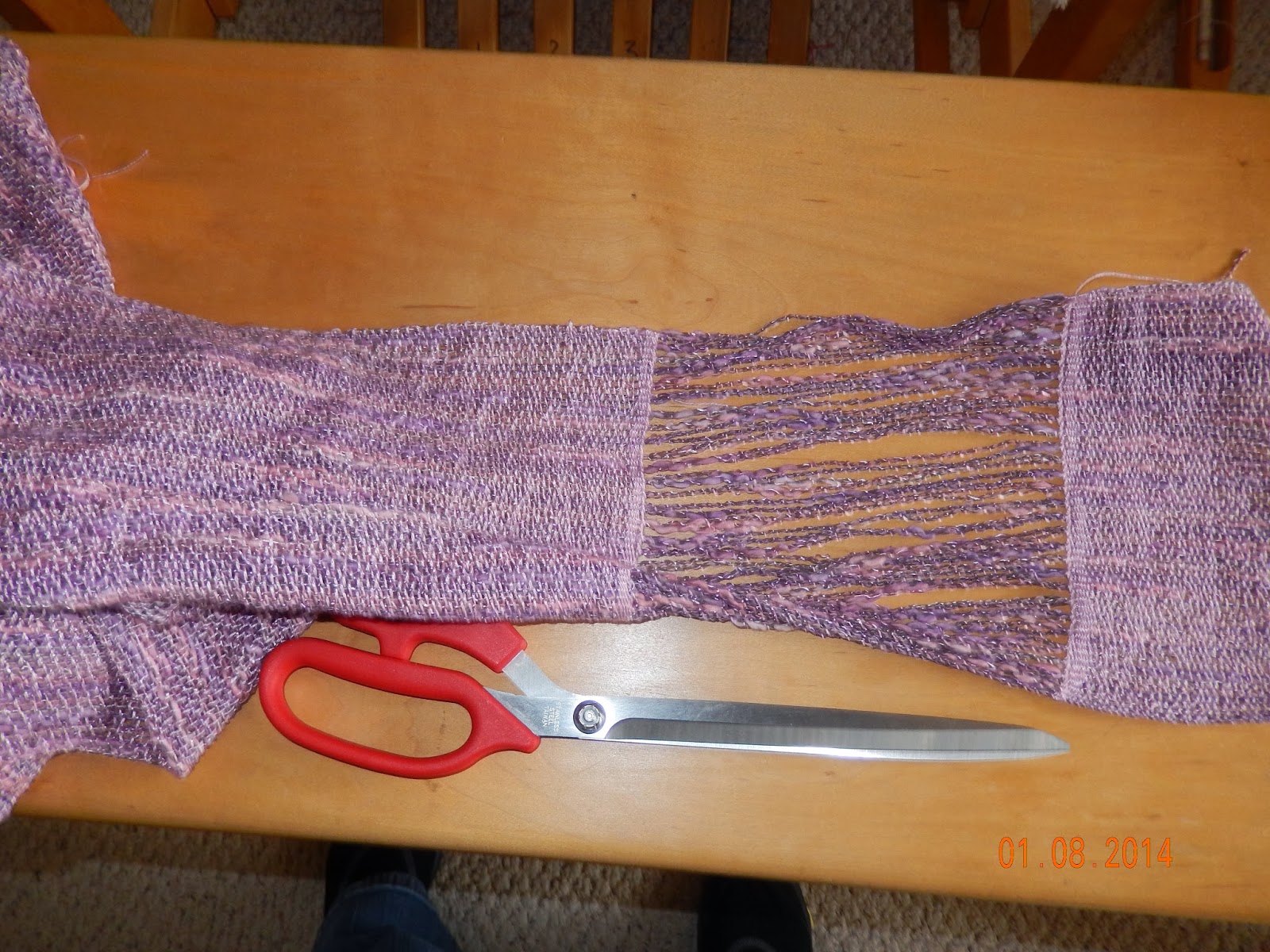 I keep forgetting to show off the scissors that my sister-in-law Rochelle gave me for Christmas.  One snip and the warp was cut and ready to twist.  I didn't even know scissors came in this size. 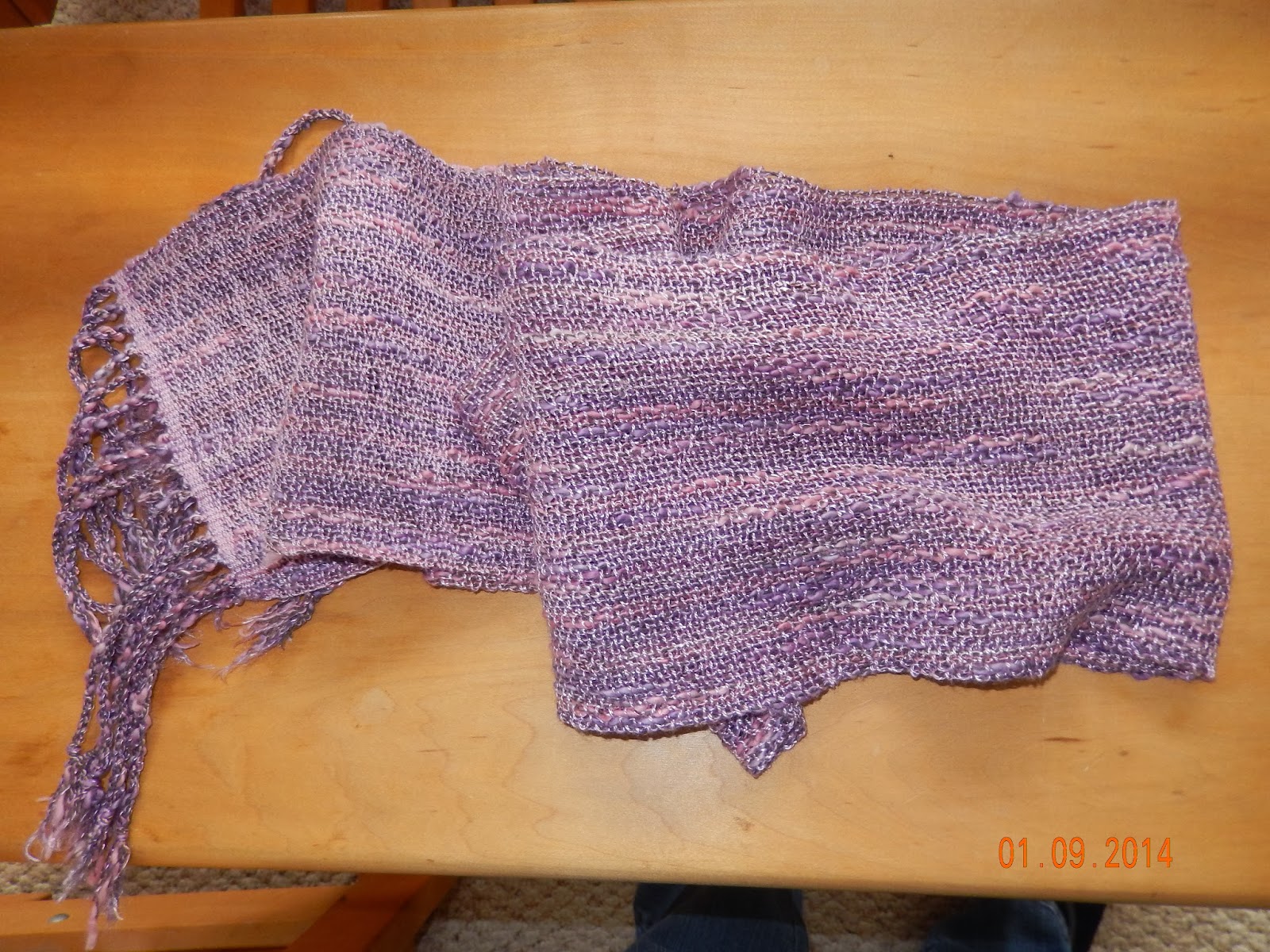 I have obsessed for a year about whether or not art yarn could be used as warp.  The conventional wisdom seemed to be that it was just too friable to withstand the abrasion against the heddle eyes.  I'm here to tell you this scarf wove up without a hitch.  I had *no* abrasion.  The sett is 8 epi and 10 ppi. It's all rayon so drapey and soft, like the faux silk that it is.

This is the same yarn I used for the scarf I gave to Alexia on Christmas Eve.  If you go back two posts you will see how stripey it was and also how wonky it made the selvedges.  I like the stripes to be horizontal, as in this scarf, not Lu's.  I wasn't pleased with it then but I'm thrilled with the yarn now. 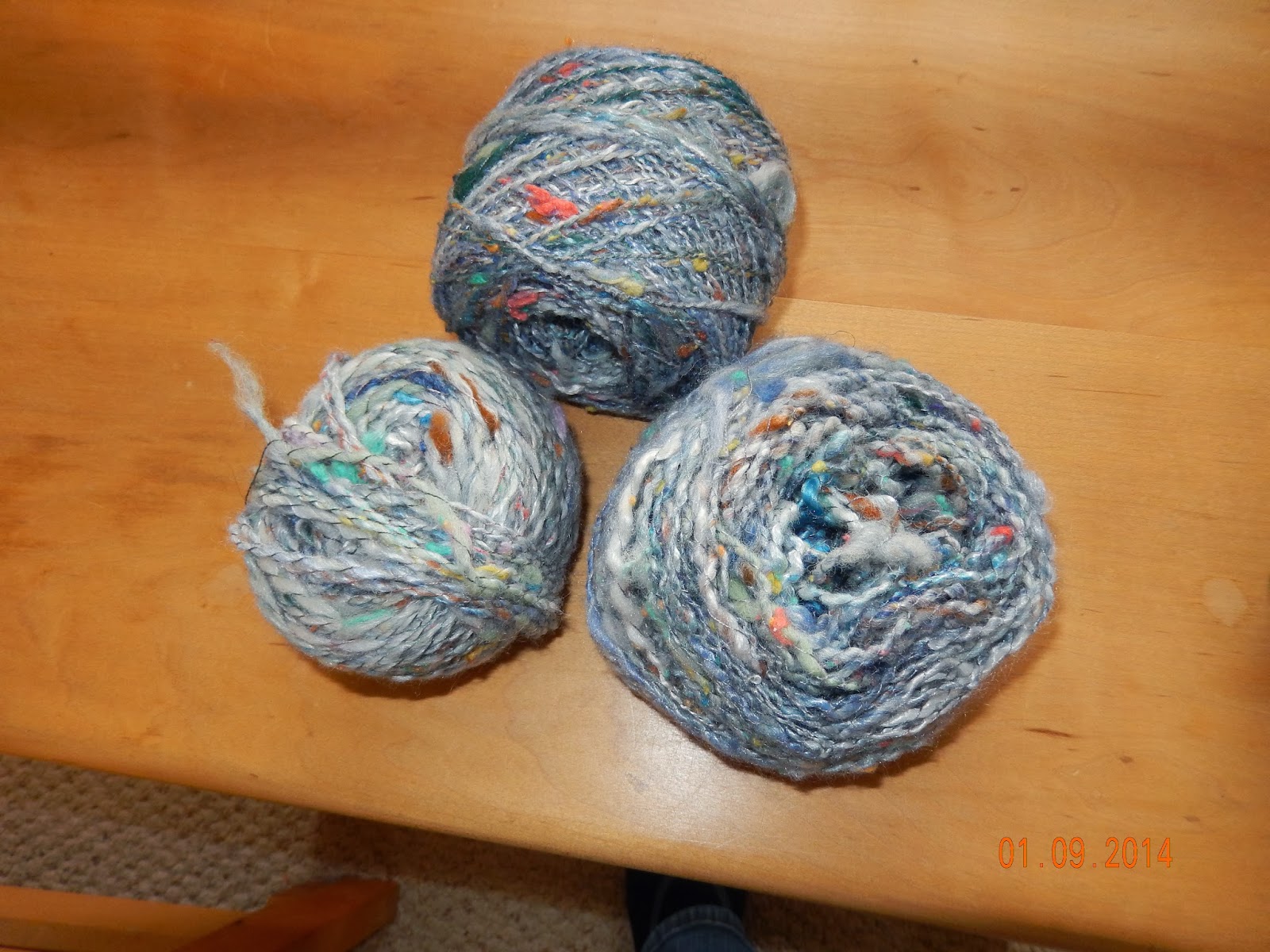 This is the first art yarn I ever spun and I did a horrible job, but it has a silk binder which should give it some stability.  I've decided to weave it exactly as I did the rayon.  It's the only way I'll know if my handspun art yarn can be adapted to weaving.  I spun this from a Cottage Creations bat that I bought from Sue Flynn a couple years ago at Spindle Camp.  So now I'm excited about making my own crazy bats and spinning them.  I had ordered Spin Art Jacey Bogg's book on spinning art yarns which arrived when I was in the hospital.  I haven't even opened it but I'm started to get excited about possibilities.  It's time to check out the book. 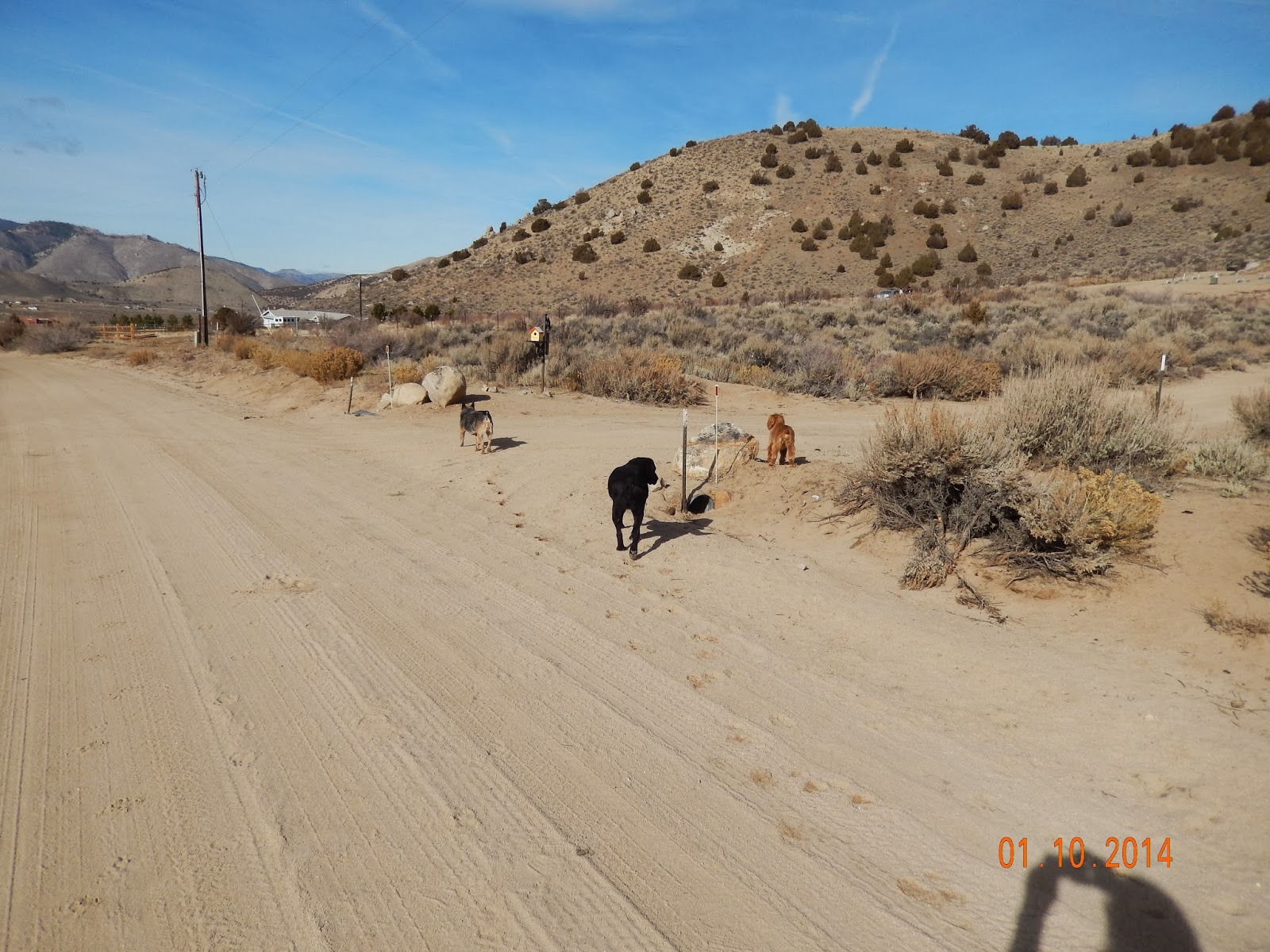 I walked the dogs about midday today, and no, we didn't get another dog.  Our neighbor's puppy has taken to tagging along.  It warmed up today and was really pleasant because a storm is supposed to come in tonight. That would be fantastic since we've just had the driest water year on record and two ski resorts have closed.  The remaining are making their own snow.  Skier's have a bumper sticker - Pray for Snow!.  Given the wildfire risk, that's exactly what I'm doing! 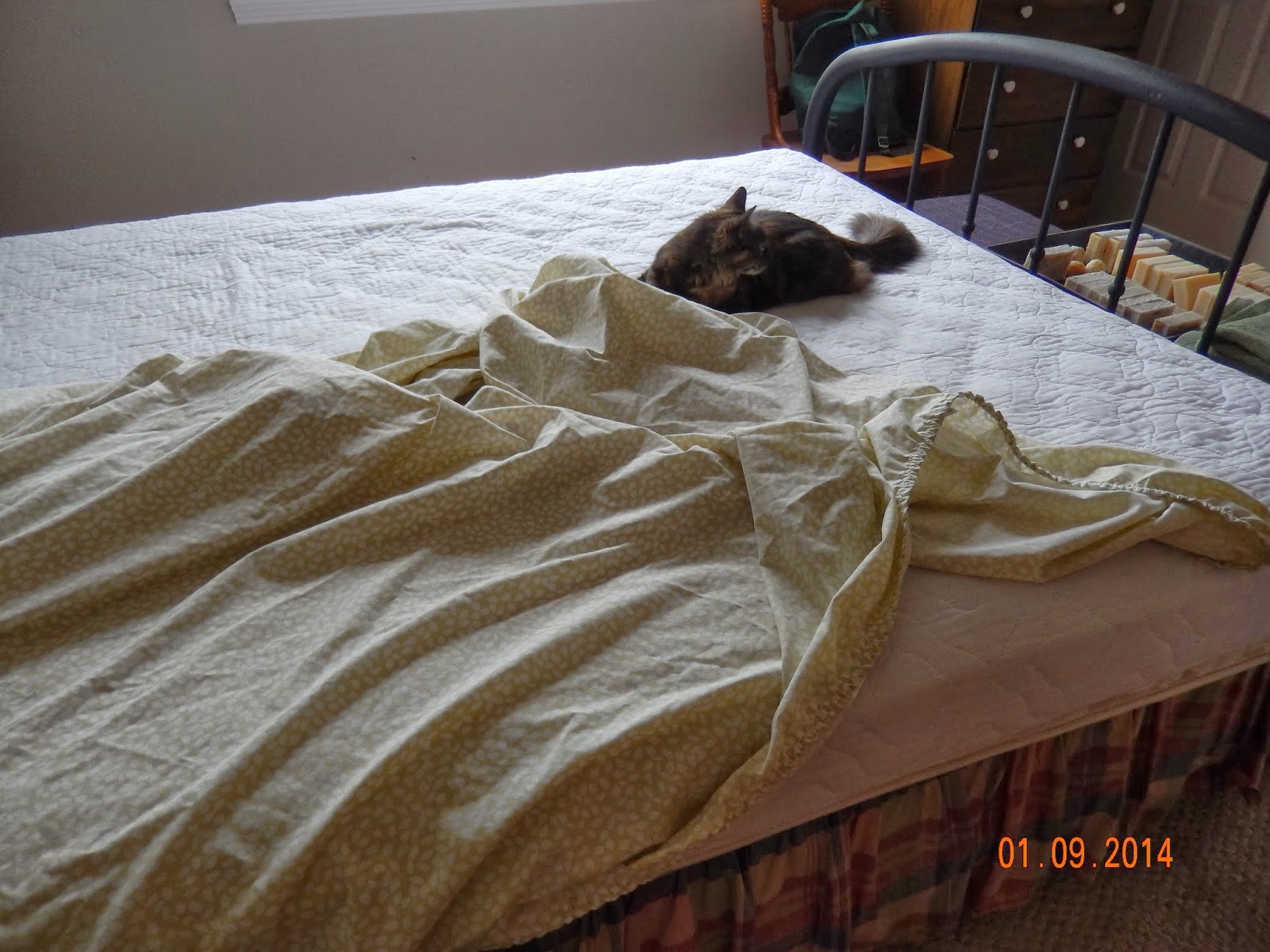