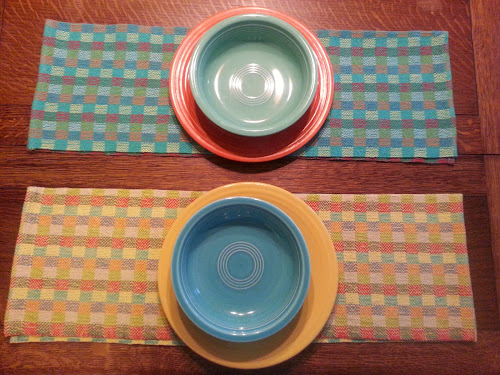 The lady from Florida who bought my "Fiestaware" towels sent me a photo demonstrating that I had indeed nailed the colors. Even though she also is a weaver, she has her mothers classic Fiestaware and knew the towels would complement them, and thus she complemented me. 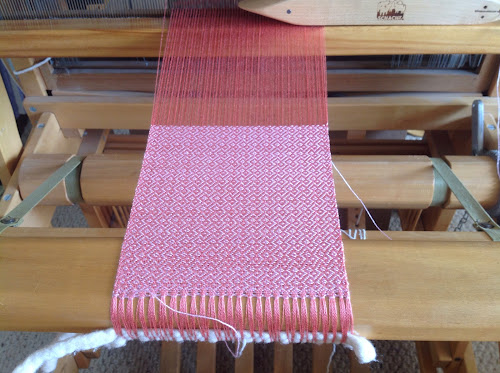 I finally got my looms dressed. This scarf is the Walls of Troy draft in 8/2 Tencel coral and pink, the same as my all white one. I had more mistakes just on his towel warp alone than I have had all this year and maybe even longer. It's made me think that perhaps it's time to try warping from the back again. I haven't done it in five years but after being refreshed through the guild on the technique to teach our newbie weavers, maybe the time has come. And just when I thought all was well, I discovered these two blue threads, side by side. I can't remember the last time I was this frustrated. 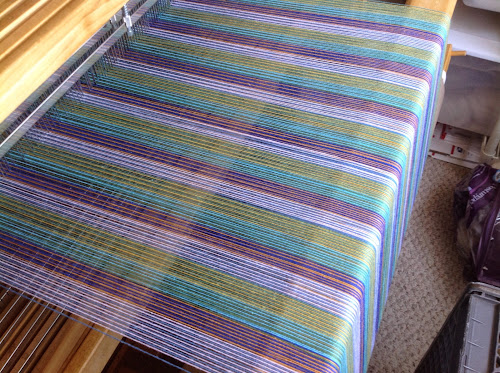 I've been second guessing myself on these colors for a "seaglass" colorway and then with all the errors, I finally reached the point where I considered cutting it off, all ten towels worth, and throwing it in the trash. 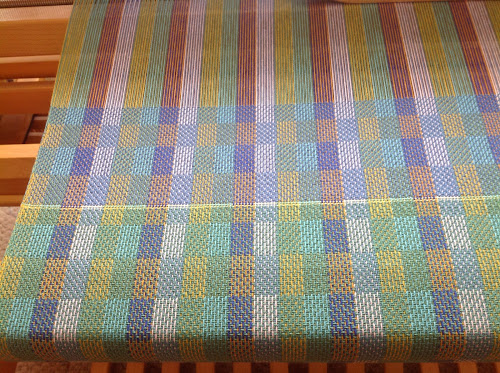 I've gotten past that and I'm proud that I stuck it out. I do think the light pink is going to be okay. I used Google images of seaglass and light pink was clearly one of the colors. 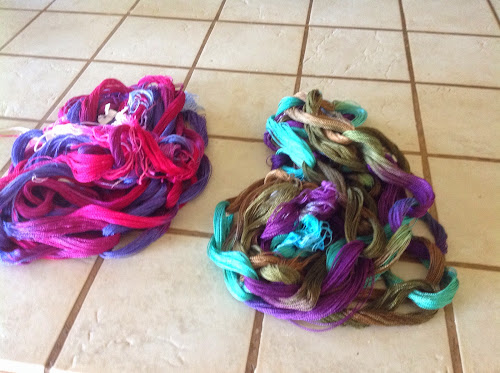 I had a table at our local farmers market today but before I went I chained my two painted warps - my painted ladies :) It's going to be a couple of weeks before I have time to do anything else with them as I have a school library sub job this week and part of next. More hurry up and wait. 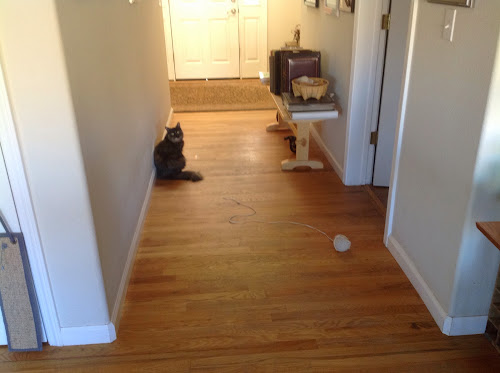 Maddie says she doesn't know anything about a ball of yarn.

Posted with Blogsy
Posted by Sharon at 5:28 PM

No wonder that lady bought your towels; they make the perfect place settings!

Those towels look awesome with the fiestaware. Nice Job!

I've seen that same innocent look on my boys when I find another bit of fiber on the floor. The thing is, though, I have no idea where they are finding it!

The dishes and placemats are gorgeous! Maddie needs to acknowledge that she has a problem. Or maybe she's just trying to knit when you're not looking?

Love the Fiestaware towels with the dishes. You're right on with those and they look great. I really like the seaglass colors. Sometimes the errors are a way of suggesting we slow down a bit - but it is frustrating. But not enough to trash 10 unwoven towels. :-) Love seeing your loom at work.