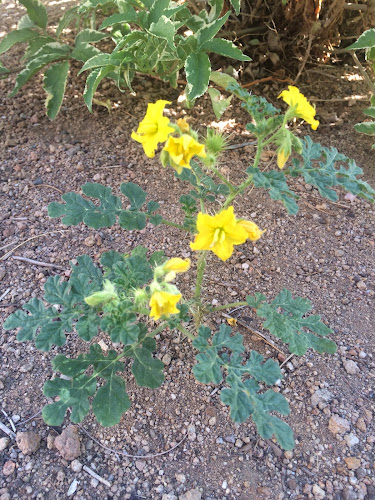 Tuesday I took this picture of a weed in our garden and posted it to Facebook. It's kind of attractive and I was curious to know if anyone could identify it. Several people said they thought it might be a watermelon volunteer. Amy, my fabulous reference librarian friend, came back with the low-down. It's Buffalo Burr, related to the nightshade family, and is classified as a noxious weed. Those burrs can be nasty. So sorry pretty weed, you gotta go. 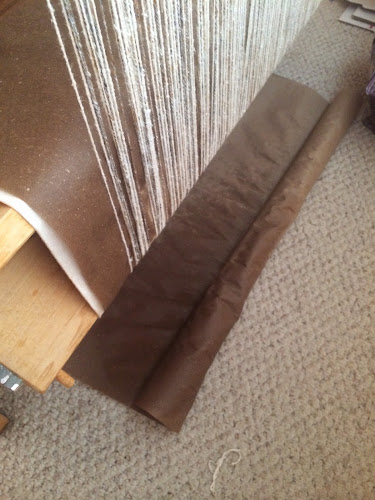 The plumber we found on Angie's List came out on Wednesday - I heard him comment to Ian that it looked like he was bringing the storm with him. What storm? I had been reading but when I looked out the window, I saw an onminous black cloud creeping down Petersen Mountain - the storm was coming from the south. By the time the plumber went to get his stuff from the truck, the sky opened up and dropped buckets. We opened the garage door so it would be closer to his truck but still Ian had to loan him his Oregon rain jacket - pouring rain, the stuff flash floods are made of. I got caught up with the plumber so it was several minutes before it dawned on me that my south-facing studio window was open.
I raced up the stairs to see rain pouring into my studio, blowing in laterally like a movie studio special effect. The sill was covered in water and it was cascading down the wall. The carpet was soaked, as were the blinds, my packing paper, the warp and my loom. The first order of business was to sop up as best I could with bath towels. The wet warp on my back beam really upset me and I didn't know what else to do but to weave until I could advance off the wood and also cut the wet paper away. I'm lucky it was a short warp for two baby blankets. I wove the project off today and orange-oiled the whole pathetic mess. 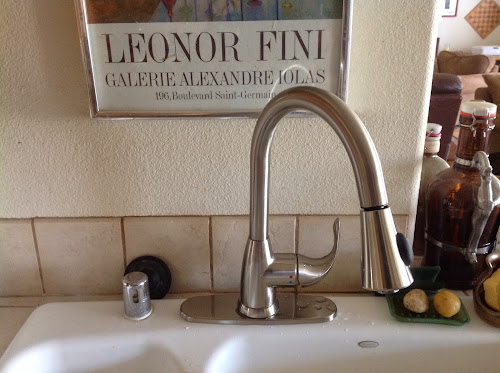 This is the main reason we called the plumber. The right side of the sink is very deep and too hard to reach for Ian's damaged back. This is the most awesome faucet I've ever had. Even the plumber was impressed. Ian looked up kitchen faucets in Consumer Reports and then bought what they advised - Granite Bay, under $100. 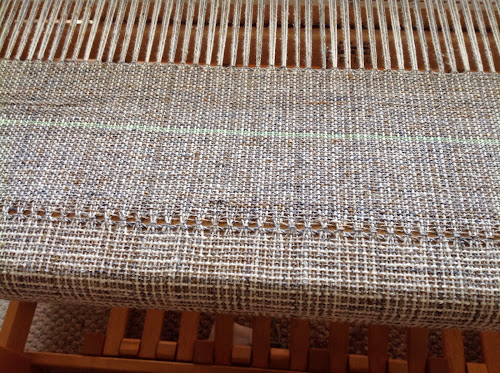 I decided that instead of making fringe on these baby blankets, I'd do a hemstitch and then hem them. I've never done that before. I'm concerned that the hem will be awfully heavy for such a small blanket. I'm always trying things out to see what happens. I look forward to having enough experience to actually know what happens. 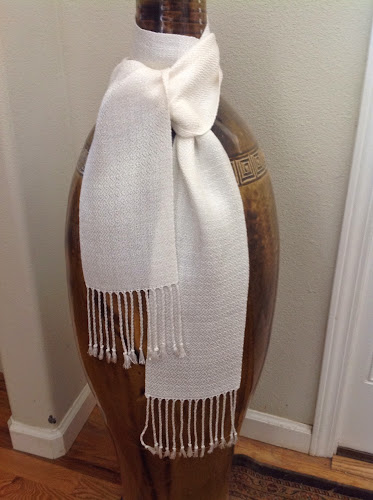 And I finished my first scarf from Tencel yesterday. It was really stiff at first but Cindie said she always uses fabric softener, so after this photo, I washed it again with fabric softener and steam pressed it. It made a world of difference. 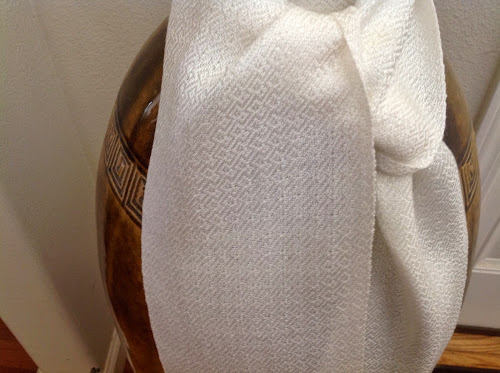 I'm really pleased with my first Tencel scarf and am already planning a second warp with this same draft, ony for two scarves this time. I'm sure I need a weaving 12-steps group. Hi, my name is Sharon.....

Posted with Blogsy
Posted by Sharon at 4:29 PM

The scarf is beautiful - your vase wears it well.

Awww! Too bad that the pretty weed had to go. Can you believe something so attractive can be so harmful? Anyway, I'm glad the plumber came right away. It's very professional of him to come out, even though there was a storm. Was the sink moved higher? It'd be terrible if the low sink worsened Ian's already damaged back. All the best to you, Sharon! :)