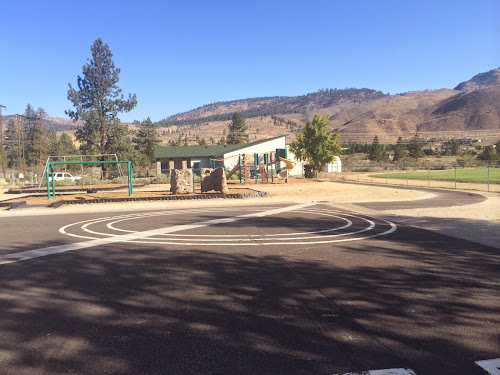 The Verdi library is where I've been this past week. It's a joint use facilty, a partnership between the department of wildlife, the public library and the school district. Verdi is a small community west of Reno right on the California/Nevada border. The school is equally small, one classroom for each grade, and all the children know each other. It's my favorite school to sub for even though it's an hour from our house. Nothing is close to us and I enjoy the change-up and challenge. Days are a mixture of class visits and kids coming in on recess and lunch hour. They're a reading group! 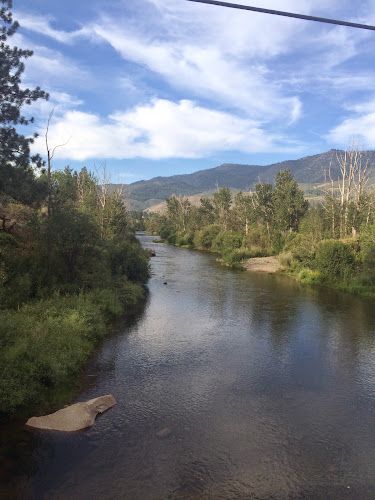 The school is located on Bridge Street, named for the one-lane bridge that crosses the Truckee River which flows from Lake Tahoe to Pyramid Lake. I took this from the bridge looking west at my own peril. It's a busy bridge! 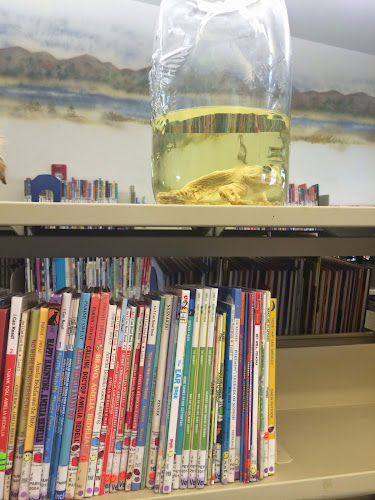 The department of wildlife has supplied "wildlife" as part of the decor. I was straightening books on this shelf of easy-readers and didn't enjoy the frog just above my eye level, sloshing around in its jar. One of the children asked me if it was real and I said yes. She asked me if it was dead. I said yes. 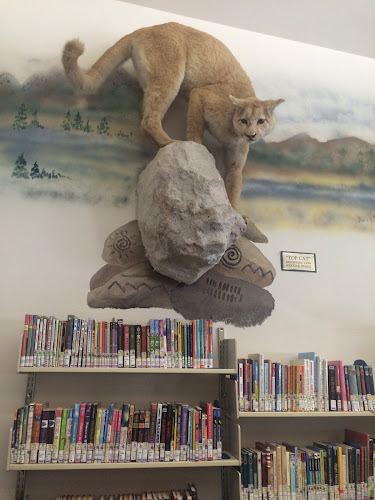 This cougar nicknamed "Top Cat" is perched above children's fiction. Children who have attended here are accustomed to the wildlife and other than the frog question, it was largely ignored until the kindergarten class visit. I was ready for the children to settle down so we could begin story time but I was sadly mistaken if I thought I could begin without first addressing the wildlife. One girl asked me if he was stabbed or shot - not sure why that would make a difference. A friend who used to work here when the library was flush and could afford a fulltime staff told me that she always told the children that the animals died of old age. 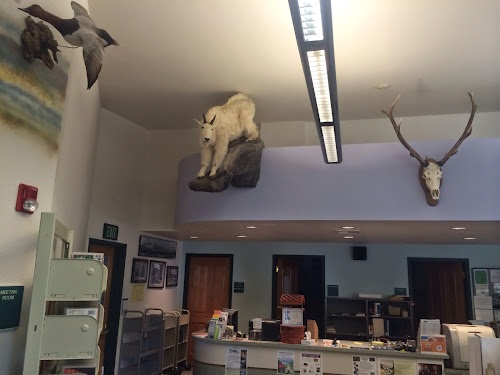 And then there's the mountain goat perched over the staff desk. I'm standing in the area of adult books and had to shoo some sixth graders away from it - they got themselves into a giggly scared state, insisting that the goat was winking at them. I found the wildlife a little creepy myself. A third of the building belongs to the department of wildlife which also serves as meeting space for the community. I was a little unsettled one afternoon when their staff had a table piled with rifles that they were checking and blank firing, getting ready for the hunter safety course. I found the stack of picture books that I was reading against the clicks of weapon checks an odd combination.
I read dozens and dozens of picture books, reacquainting myself with old favorites and looking at some new ones, getting my story times in order. The librarian I was subbing for was actually present but testing children in the computer room for learning competency which is why this is such an unusually long sub job. Each morning I'd pick up the key from the office and return it at the end of the day. Friday as I was leaving the principal come in, gave me a big hug and said "We love you!" It's that kind of school.

Posted with Blogsy
Posted by Sharon at 7:37 PM

So the stuffed animals in the library are a bit disconcerting but I'm sure you get used to them after a while. However, your scenery is absolutely spectacular. It sort of makes up for the weird stuffed animal decorating trends :)

I know that I've read your blog before, but I've been out of "blogdom" for a while. I really enjoyed your posts for this month. When I first started teaching, I almost took a job teaching English in Burney, which is a ways from you, but still the "boonies." I ended up in Central California, and I often think that I would have liked living in the woods....except for the greatly diminished salary. LOL