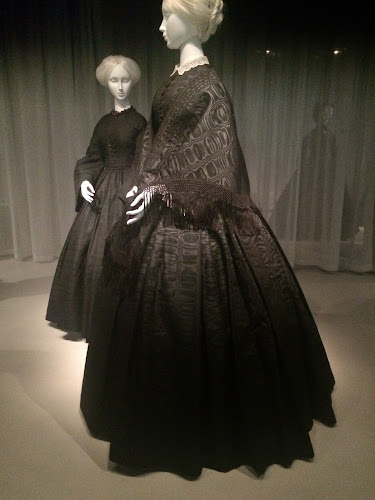 I was terribly disappointed that the new Costume Institute exhibit hadn't opened yet when we were at the Mat. It turns out opening day was Tuesday, the day before our flight so we went back for Death Becomes Her - the clothes of mourning. 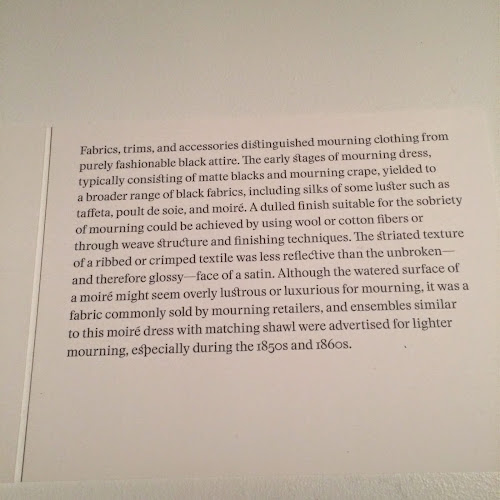 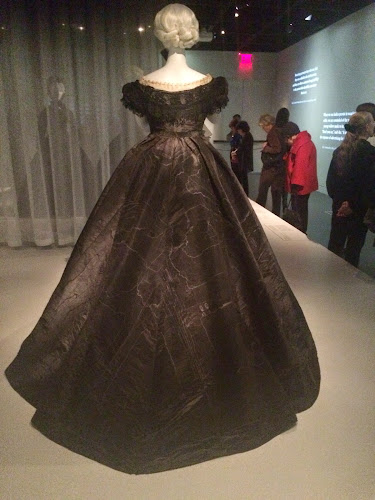 Of course these garments were for the wealthy, and unfortunately I forgot to take a picture of the explanation mentioning that these garments introduced black into fashion. It's interesting that the weave structure was chosen to make the clothes more mournful, and no doubt the weavers were men. 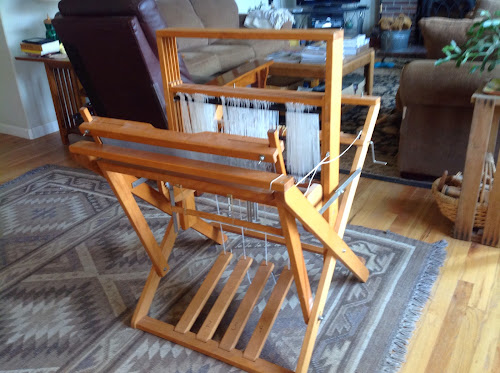 This is my Dorset workshop loom wtih the Texsolv heddles I put on a year ago and hated. The inserted-eye heddles I had ordered before we left were waiting for me, so before I could starting warping for the workstop, I first had to replace the heddles which requires some disassembly of the loom. I think that's unique to this loom and it took more time than I had planned - isn't that always how it goes? 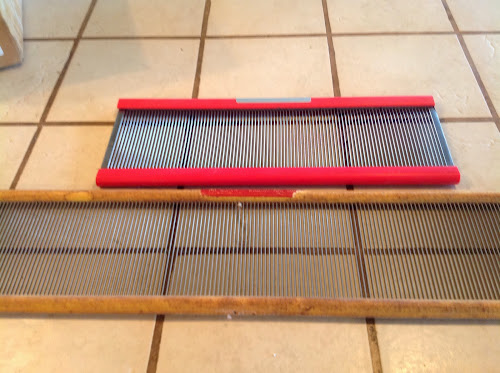 I ordered the heddles from Jim Wilson at Gowdey Reeds in Rhode Island. I'm impressed that he makes everything right here in the US. He included this sample of a reed which is so much nicer than the 8 dent reed that came with the loom. Before my next workshop, I'm going to get a 10 dent reed. I had to put three theads in each dent for this workshop warp which isn't as easy as sleying even numbers - or a single thread which is even better. 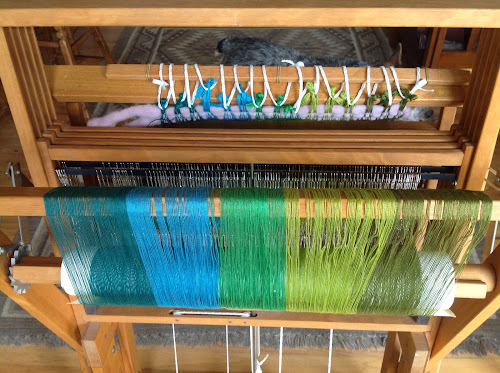 But the loom is ready, new heddles and 15" of 10/2 perl cotton, ready for the iridescence workshop with Bobbie Irrwin tomorrow. I've always said - I warp front to back, end of story. That's because my two Gilmore looms are so easy to dress that way. I had to eat my words as I fought to dress this loom. It absolutely demands to be warped from the back. Coupled with the sticky warp, it took twice as long as it should have and was pretty hard on my cranky neck. 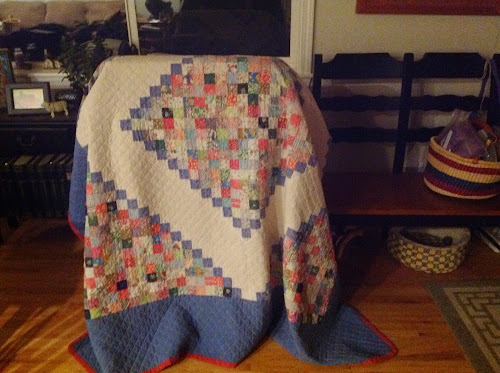 After all the work, I wasn't taking any chances with my crazy cat and shrouded it in the living room where II could keep an eye on it. I'm not saying it's Maddie proof, but so far she has loved having a hidey place to go and hasn't batted at or chewed on anything. She'll be sad to see it go and I will be relieved. The next two days will be all about creating iridescence and learning about color.

Posted with Blogsy
Posted by Sharon at 1:51 PM

Glad you're home safe and sound. I definitely agree with protecting quilts from crazy cats. I lost a linen project because our cat Kevin kept chewing the warp threads. Nice quilt!

The iridescence workshop sounds wonderful. Can't wait to see your follow up posts on that.

I'm with you about the heddles; I love inserted eye, and don't get the hubbub about Texsolv!
Thanks for sharing your trip to NYC! What a great adventure you had! And happy late birthday!

My Dorset looks like yours except yours is light wood and mine is stained walnut. I love my Dorset! Great idea covering it with the quilt.

Why didn't you like the texsolv heddles? I would buy them from you if you'd like. I thought they made the loom and weaving much quieter...