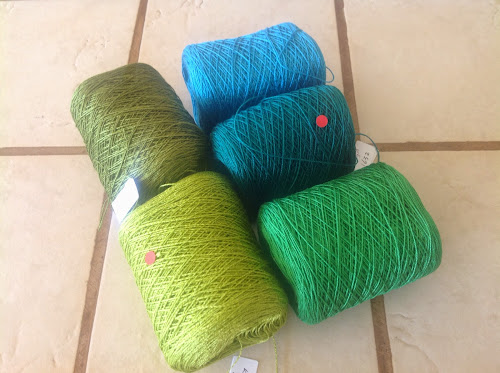 I picked up my warp at the guild meeting last week for the Bobby Irwin iridescence two-day workshop the end of this month. She called it a color lottery in the instructions and I think I won it. All her colors were great but I'm in love with these. She'll bring the weft yarns when she comes. This is only my second workshop and it's going to be fantastic. 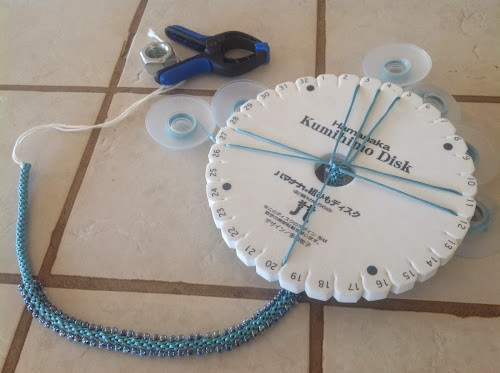 I've lost interest in knitting for the moment. I have two sweaters near completion and I can't make me pick up either one, so I thought I'd return to some Kumihimo braiding to provide me with some handwork. I had bought this turquoise cord from Kareen Huntoon last year and used it with some beads I already have. 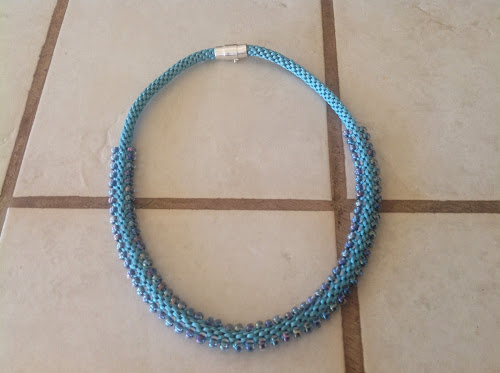 The beads are more in the lavendar colorway but I think they have enough variety to work fine - not too matchy matchy. The instructions that came with a kit that I bought from her a while ago said she provided enough thread for a 20" necklace, but that she preferred the17" length. I've made two 20" necklaces and don't wear either one - too long. This one is shorter and I think I'll actually get some use out of it. 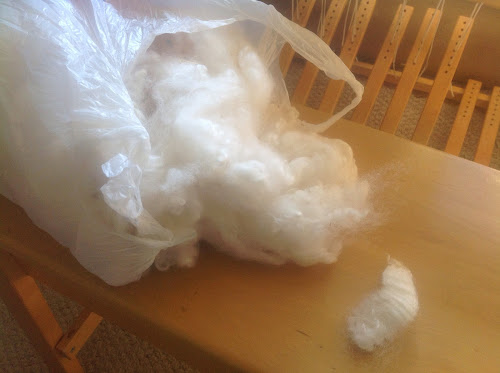 I got a call a couple days ago from a local artist named Jan Horton. She's looking for white crimpy wool to use for "woodland" the santas she makes and her friend in Fallon gave her my phone number. I was trying to think what I had that might to suit her purpose and then I remembered this bag of Romney wool that I got from Terry Mendenhall, about eight years ago. It was from the swag that our sheep-to-shawl team received and divied up among us. I was spinning a lot at the time and planned to put this to use, though I never got past washing it. 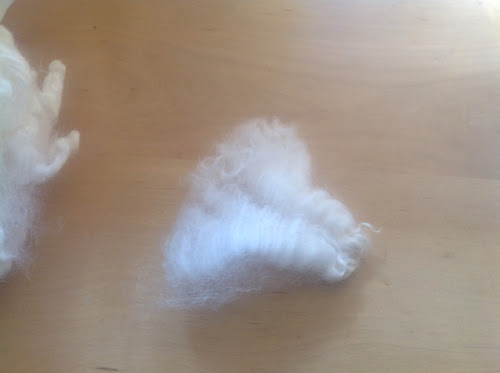 I sent her a couple of photos and she was thrilled - said it's exactly what she has been looking for. I forgot to ask her to message me a photo but the santas are fantastic, 10" tall with faces she sculpts with Fimo clay. She'll get a lot of mustaches, beards and eyebrows from this sack of wool. 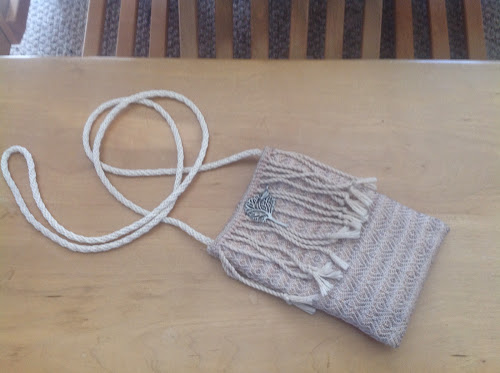 I really enjoyed meeting her and found she's a reader too so we also ended up talking about books. I showed her the bag I made for craft fairs to put my cash and phone in. She said this is something I could sell at Ryries and suggested I stop in her shop for a chat. She also bought four bars of soap and thought Ryrie would be interested in it as well. I'll follow up on that after we get home.
I was hoping the inserted eye heddles I ordered from Gowdy Reed Company in Rhode Island would have come before we leave in the morning, but no. They were just shipped Friday. I've been planning to sell my Dorset workship loom after this workshop because I can't stand the Texsolv heddles and couldn't find metal ones. Someone on the 4-Shaft group told about this company and sure enough, he has them in 8 1/2" - I'm going to have a wonderful little loom after I put those on. They'll be waiting for me when I get home.
I had my cortisone epidural Friday morning at the St Mary's outpatient surgical center. Holy Cow! It's not small deal. I had the option of sedation and was pretty happy to learn that I could opt for a local pain killer instead. I had some moderate relief within the next day. Someone from the center called to check up on my today and said that today being the third day after the injection is probably the first relief I'll feel from it, the prior relief being from the local. She said that over the next week I should experience improvement every day. I hope it's not too much to hope for being pain free and a return of full motion.
I have to finish packing and then I'll ice my neck again. So far so good with the promise of even better. We're off to NYC in the morning! I guess there are still flight delays from the fire started in a Chicago control tower but we'll get there eventually. Time to go!

Posted with Blogsy
Posted by Sharon at 4:20 PM

You did win the lottery with those warp colors - can't wait to see what you do in the workshop.

Love the kumihimo with beads.

Have fun in NYC

Those are awesome colors. Can't wait to see what you make. Tell Bobbi "Hi" - I met her at Fibervisions years ago, and enjoyed our conversations.

I'm glad you're not selling your Dorset - you'd be kickin' yourself if you did. I'm going to stick with my flat steel heddles on mine, based on your experience. I love the texsolv on my big loom, but it's probably not the right application on the small one. As I age (hee, hee), I may convert to inserted eye, just so I can see the buggers!

I love the colours for your workshop warp. You did win the lottery with that one. Have an awesome time on your trip! Take lots of photos.

That necklace is beautiful. I love the lavender beads against the turquoise blue thread.

I am praying for you each day that you get your full-range of motion back. Scott's mom isn't 100%, but she's 90% and she is quite happy with that - only a little stiffness when she turns her head to the left remaining.