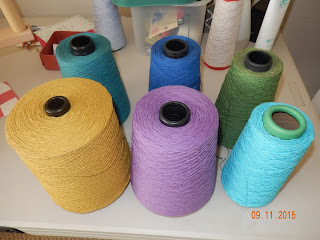 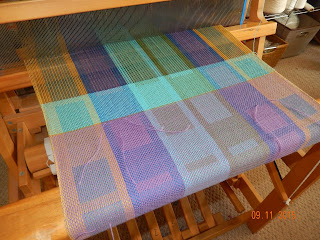 I started this project last week and for the first three towels I used the lilac yarn which has been back ordered from Webs since May.  I've made "tidepools" until now with blue weft and like this for a change. 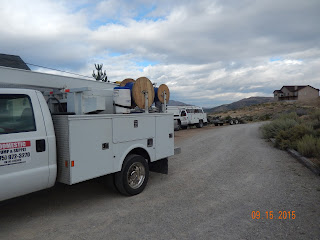 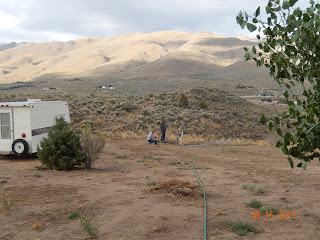 The well guys were checking for volume and quality.  That report takes about a week to come back.  Meanwhile, we learned today that our house appraised "at sales value."  Another piece of the puzzle falls into place. 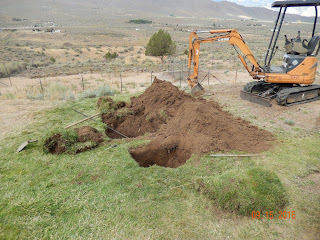 The septic company expected problems since we've never had it pumped and didn't know exactly where it is.  But the excavation went off without a hitch but the pumping truck wasn't scheduled until after 12:00 so they're waiting in their truck for the other truck since they're have to fill in the hole afterwards. 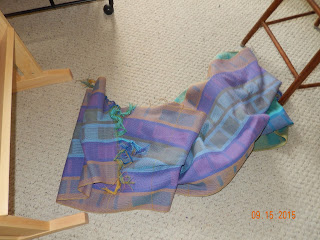 I had planned to pack while these inspections were going on but after four boxes I ran out of tape so wove off the towels instead. 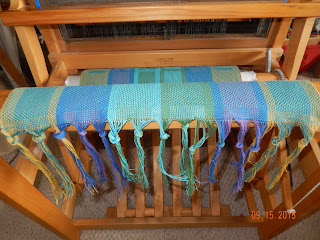 I've learned that if I weave a half inch of plain weave and then tie the warp ends in an overhand knot, I don't have to zigzag across the end of prevent raveling.  Plus the zigzag edge gets pretty wonky in the wash and is hard to hem.  I'm washing these now so I can hem them tomorrow.  But for now, I just got a phone call from a neighbor who is coming over at 2:00 to buy towels.

Sounds like its been a beehive of activity at your place! I have started a basket at Webs and saw several of the cotton colors I picked out are on back order. This will be my first order with them. Ordering for towels. I needed four colors according to the pattern, but well I can't seem to narrow it down to just four colors. :O). So will get a few over four.

I like to have a lot of colors to chose from. I pick a bunch of cones and then work backward until I've gotten down to the ones I need. As for my order, I make sure to order enough to get free shipping and the discount.