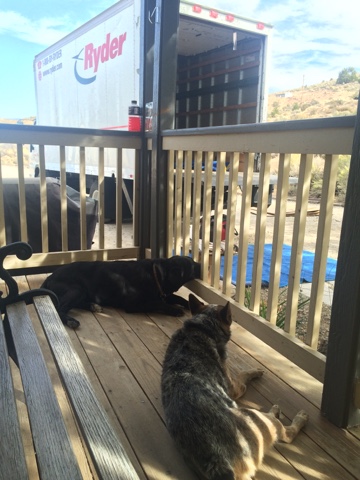 I sat with our confused dogs on the front porch while the movers loaded our things onto this bobtail truck.  The driveway was too steep with a sharp bend to permit the truck to come down to the house. 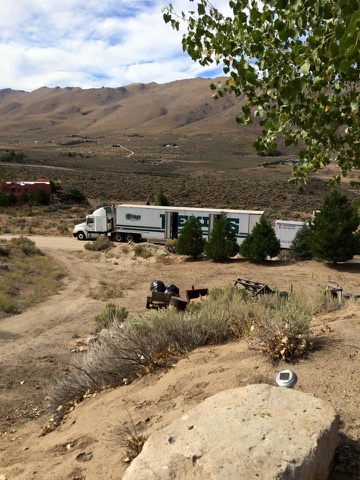 The semi-truck backed all the way down Fetlock at the juncture with Quarterhorse to our driveway.  It took them several trips before everything was transferred, part of the reason this move is so expensive.

I had to leave for a visit with my neurosurgeon.  It's been two years since I broke my neck and so I was very pleased with a normal neurological exam and subsequent release.  As we were saying goodbye I commented that I was pretty luck.  He made a wry face and said "You were VERY lucky."

We spent the night at Carol and Harry's.  And so Tuesday morning, the 29th, two years later to the day from my accident, I drove into town at 7:30 to pick Maddie up from the vet where she was being boarded.  I got back to Red Rock Road and Hwy 395 at 9:00 where Ian and I planned to meet up.  We had the truck overhauled a couple weeks ago and that 21-year-old truck performed splendidly.  He drove the lead so Buster had him all to himself.  I drove up with a bewildered Sammi, though once she realized that her cat was with her, she settled down.  As did the cat.  We had to made a few more stops than usual.  A dog' farts are a compelling reason to stop :)  Even so, we managed to arrive in Bend about 5:00.

Our escrow in Reno closed today, and since we had sold our parcel a month ago, we are no longer tax payers in Nevada.  After 40 years in a state I had never planned to live in to begin with, I have moved on. 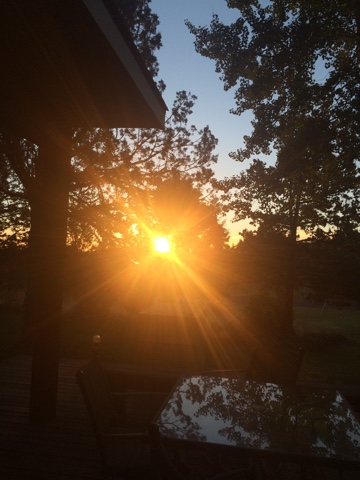 This is the sunrise that greeted us this morning.  The next stage of this adventure has begun.  Welcome to Bend!

Congratulations you made the move to Oregon, although I will miss you as a Nevadan! Wish you good luck, and keep up your wonderful blog.
Hermi

Let the fun begin! The next step is getting settled in your new home, and getting all your fiber fun started again! LOL

Glad everything went smoothly with a clean bill of health too! Exciting stuff going on for the dogs and cat. Hopefully the settling in process for everyone will go smoothly too.