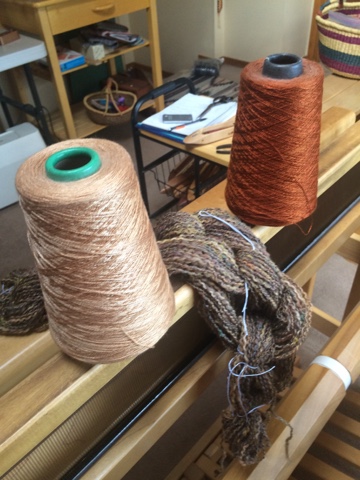 I set my next warp on top of my loom with two prospective Tencel yarns for weft  and then left them for a couple of days until I could decide which would best show off my handspun yarn. 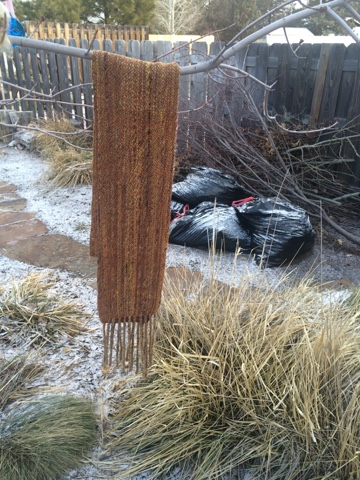 I was leaning toward the neutral thinking it might go better with more garments, but in the end my favorite, the rust won out.  I plied it with 60/2 silk so it's uber drapey.  I keep saying everything is for sale but I might have to keep this one for myself. 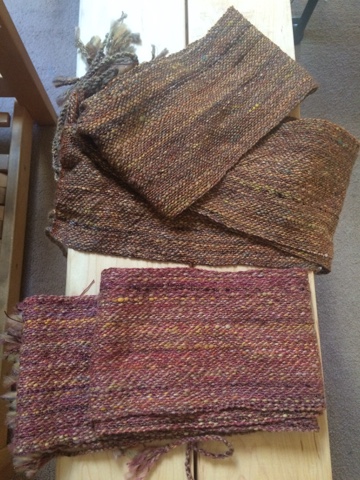 So I've finished two of the four scarves intended for Fiber Market Day in March, and I've ordered a pound of Panda to dye in a variety of colors so I can blend more batts.  I need to get some jars so I can make so dye stock from the dyes Laura loaned me six weeks ago.  It's weird not to have dye in solution after more than ten years of always having some at the ready.   And it's weird to have to order fiber after 13 years of just driving across the valley and buying it from Mim. 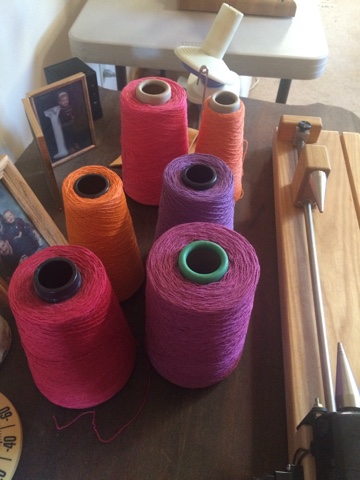 I'm still weaving on the "Tidepool" warp with just a few towels to go, and I've have started winding the next warp from these cones.  I call it "Desert Sunrise." 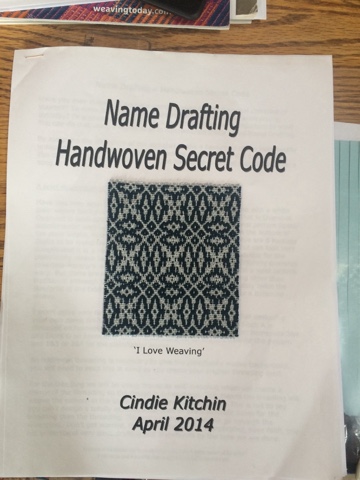 About three years ago Cindie Kitchen (from the Eweniquely Ewe blog and Etsy store) sent me a packet of materials from a class she was teaching.  At the time the idea of "overshot" made me break out in hives - two shuttles?  No way!  But I've joined the COSW Overshot study group and thought I'd go through this before the next meeting to kind of get an idea of how it works. 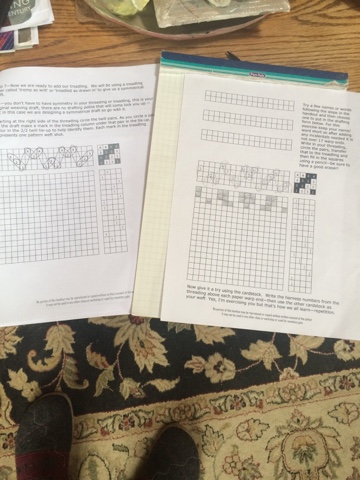 I worked through the materials for a couple hours yesterday but when I got to this part, decided to let Fiberworks, my weaving software, do the work.  My sheet matches Cindie's example with all the twill pairs carefully circled, then entered onto the treadling grid. 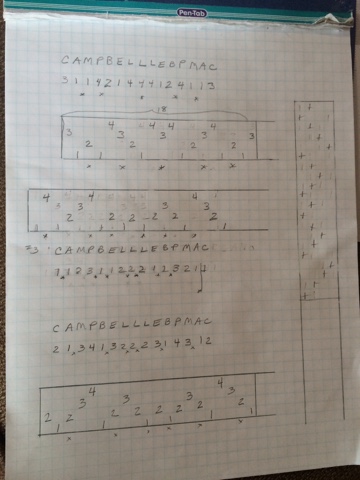 I like to lie in bed after I wake up and mull "things" over before I launch into the day.  I was thinking about the exercises I did yesterday.  Cindie provided four "secret codes" and I did every one of them.  But laying in bed I could clearly see my worksheet - absent the circles around the twill pairs.  I wanted to do it agian to see what if changes would occur by doing it correctly. 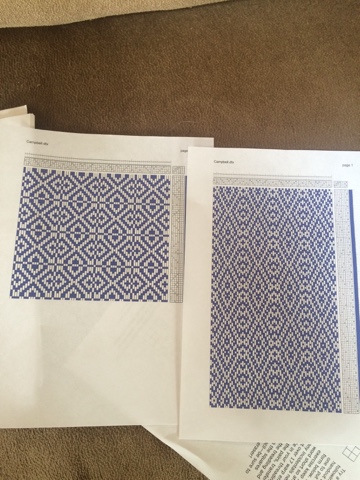 This is the incorrect one. 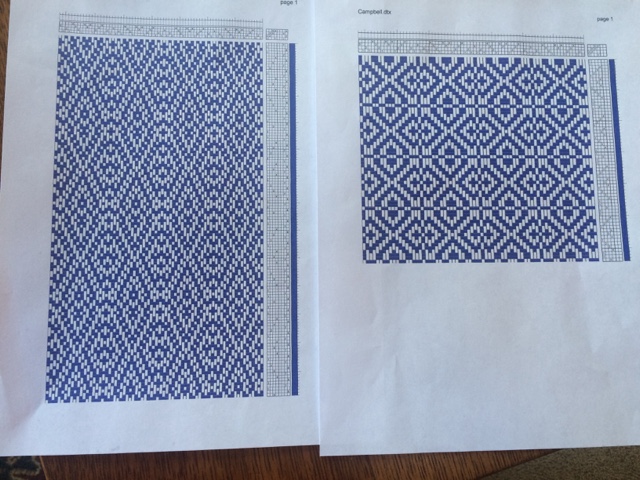 This is the correct one.  Can you see any difference?  Me neither.  But I will say that the hours I invested in this guided exercise gave me a lot of insight into weave drafts and this one in particular. 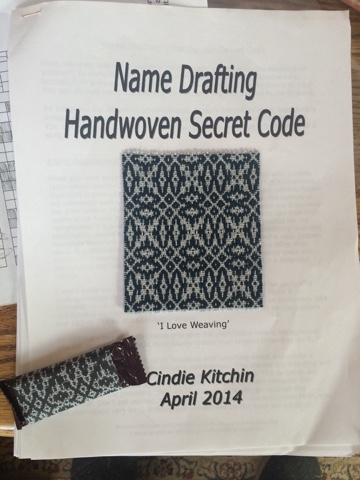 This folder has been in my file box since I put it there three years ago.  She included a lot of materials including a hands-on exercise with paper strips and this cute little pillow.  I was focused on the material and didn't realize until just yesterday that the cute little pillow is a Heath candy bar cleverly wrapped in a photocopy of her draft.  Cute!

It's hard to believe three months have passed since we moved in.  We had the kids over for one of the playoff games and pizza.  Last weekend we had a playoff-game barbecue at Josh's and will get together again for the Super Bowl.  I haven't watched football in years and I can't believe I'm saying it, but I'm going to miss the games and the social gatherings that go with them.

What lovely scarves!!! And, I bet they feel wonderful, too! It does seem strange that you are out of fiber to spin....I remember that you had several tubs of fleeces at one time!!! LOL I think you'll enjoy overshot...it has its own rhythm, and it's lots of fun to watch the pattern develop.

Cindie's packets are second to none. I also have the overshot name draft material and it is so complete. You'll have fun with overshot. There is something magical about the way the patterns appear.

I love the earthy colored one! Very nice!