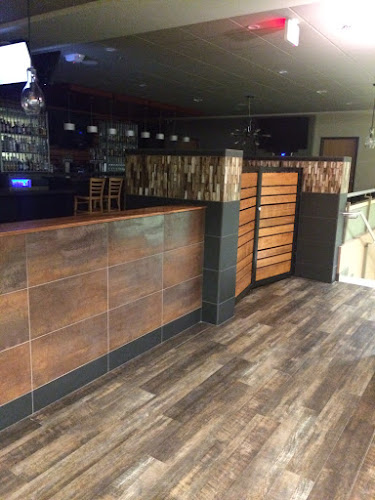 Son Matt was the tile setter for the upgraded Redmond airport bar. I love all of his work but it's wonderful to see it acknowledged by a contract. It obviously wasn't open when we flew out at at 5:00 in the morning but I took pictures so he could see it finished since it's inside security. What a pleasant little airport. They're working on upgrading it, hoping to attract some larger carriers with the longer runway currently under construction. 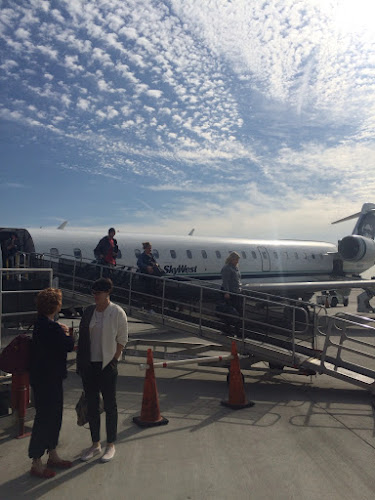 We landed in Ontario to a lovely morning. It's 'old school" when you fly this small. 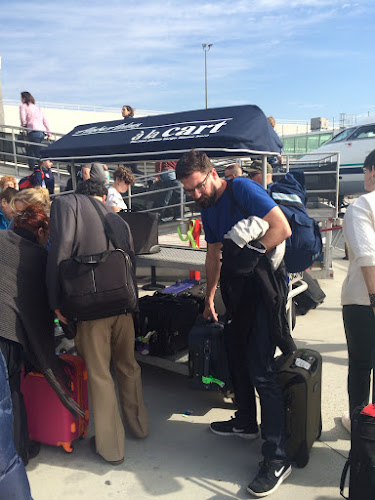 However we found lots to like about Alaska Airlines including this "a la cart" when we exited the plane. There was no scrambling to removed heavy bags from overhead bins since the bins are small and don't hold much more than a jacket. All bags are loaded underneath and by deplaneing from both ends of the airplane we were off in no time. 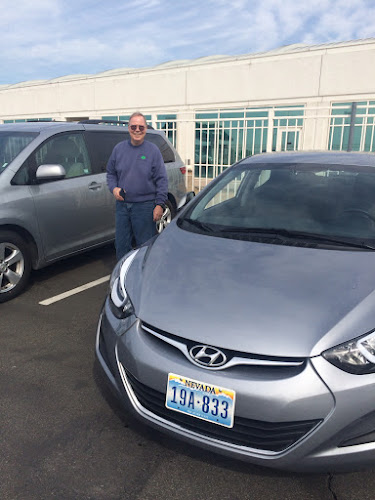 We were surprised that of all the cars on the rental lot, the one they pulled up for his was this Hyundai Elantra with Nevada plates. It seems there's no getting away from our Nevada past! 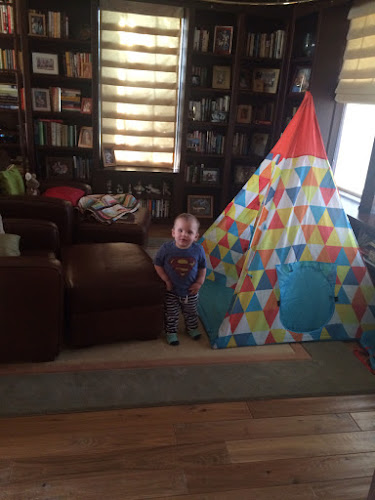 Rochelle had a house full including the youngest member of the family this year, her grand-nephew Levi. He was a happy smiling and chatty boy with a juicy cough which I came home with - a souvenir. 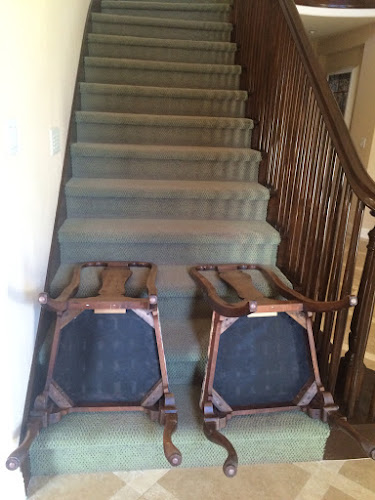 He was also a very busy boy. We blockaded the stairs though even though someone had an eye on him at all times - just to be safe. 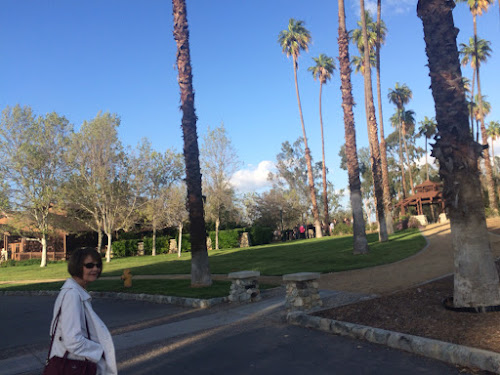 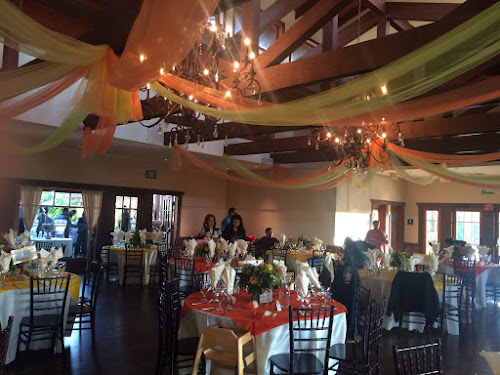 The venue was absolutely beautiful and beautifully decorated by Rochelle and her daughter Allison. Note the high chair - children were welcome. 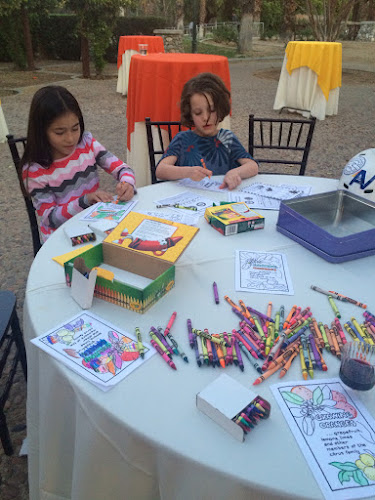 They even had their own coloring table though chase was the activity of choice. It was a birthday party and also a family/ friends reunion. Ninety RSVPed and 17 stayed overnight at the house. It could not have been a more fun weekend. 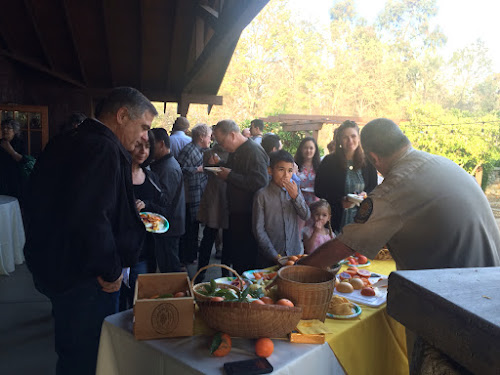 Rochelle arranged a wine and orange tasting before dinner and of the two, the oranges were a clear winner with everyone. The guy, a volunteer, was knowledgeable about all the varieties he cut for us and their history. The blood orange took us all by surprise. Most of us had heard of them but never seen them. The pulp is truly blood red! 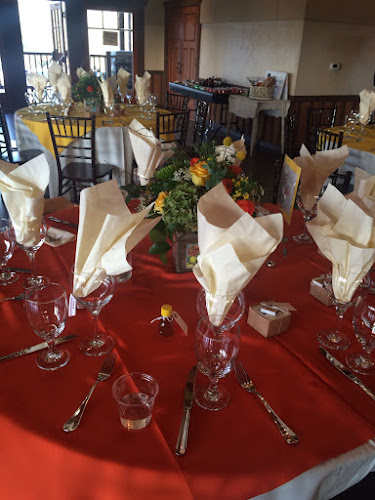 The table setting was spectacular and the beautiful flower arrangements ended up going home with the various guests. Each place was labeled with favors tagged with our names, orange-scented candles for men and orange honey for women. We were seated with both of Ian's sons, Doug and Carlos, his wife and son - an extra treat. 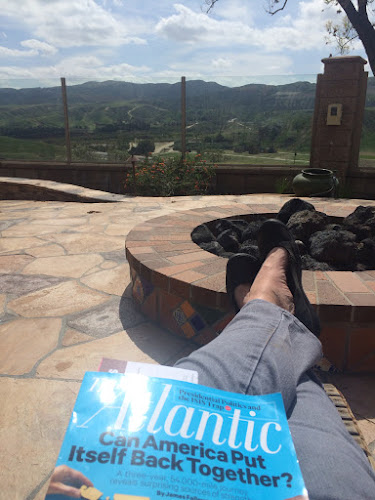 We played games, visited, laughed a lot and watched movies. This only child snuck out for some quiet "me" time. A heavy rain storm had come through two days before the weekend and we felt especially fortunate for the timing of the sun. 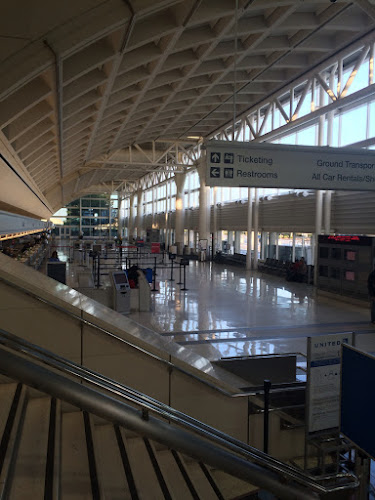 The Ontario airport is a ghost town. I read that major carriers have cut back flights to it in favor of other airports like LAX and John Wayne. I assume that's why Ian had a hard time booking flights for times that worked for us. I dislike this airport more than any other I've been in and it's because of their hostile security. There were just a couple flights preparing to depart and yet they put us through rigorous inspection. I didn't set the scanner off and made sure to wear an elastic in my hair so I wouldn't sent it off with a barette. She still patted me down for seven "hot spots" including my bare ankles. It wouldn't hurt my feelings at all if this airport shut down.

Posted with Blogsy
Posted by Sharon at 12:11 PM