We went to the High Desert Museum this week to see the Art-in-America exhibit which features the WPA era, and by going in April we still got the winter rate.  We also got rained on.  The bronze statuary is all through the landscape but this one is a favorite of the kids as you can see.  Their little bottoms have burnished it and my two grandsons have contributed to that. 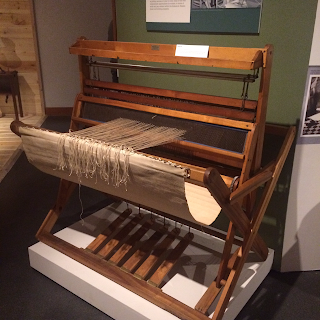 The last disiplay area was a recreation of a hotel room at the Timberline Lodge, a WPA ski lodge build on Mt Hood and furnished by local artisans.  All the bedspreads and draperies were hand woven. 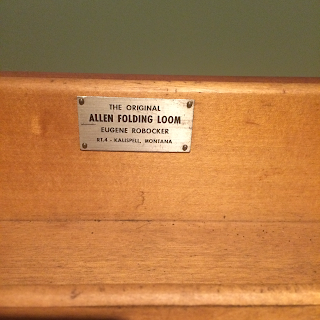 I don't know if this loom is original to the WPA artisans but when I posted this on Facebook, I learned that all the bedspreads and draperies are still handwoven and the Portland weavers help out with that when the need arises. 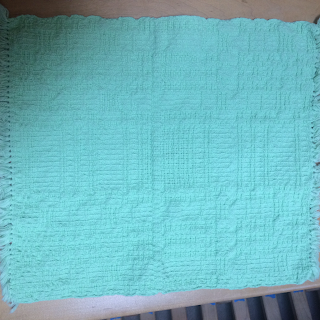 This is my very first sample woven only following a profile draft.  It's 4-shaft Atwater-Bronson and really unremarkable cloth in this putrid green which is why I'm sampling with it - use it up! 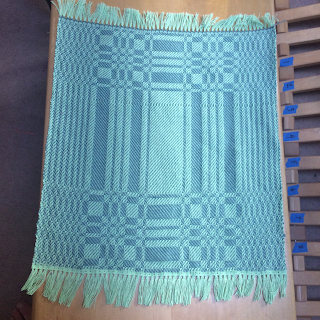 I started with a two-yard warp so Patty Huffer, our study group leader suggested that I cut it off and rethread it for eight-shaft turned twill.  The sett is 24 because I thought that's what you're supposed to use for twill.  I elongated the center just to see what it would look like and got the idea for some "heritage" towels. 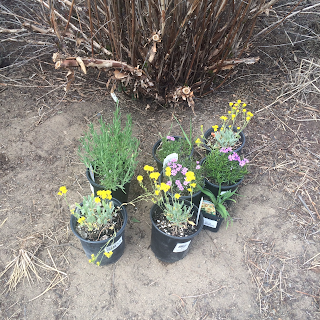 We went to the nursery yesterday on our way from tai chi.  Just these plants were $65 so I'm going to have to pace my ambitious plans. 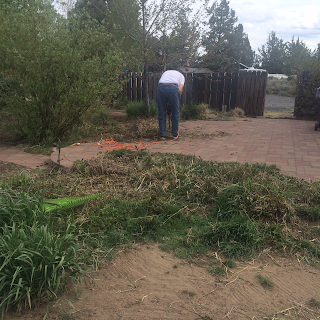 It's going to be cooler with chance of showers over the next three days, so we rolled up our sleeves and got back to cleaning up.  Ian went to the dump with the last load of stuff we cleared out and came home with a half yard of bark mulch which is sold at the dump. Ian took the hedge trimmers to the nasty creeping bush and we've leveled it.  It's throwing out creepers as fast as we can pull them.  The Cooperative Extension wasn't able to identify them so we're trying this in an attempt to avoid poison. 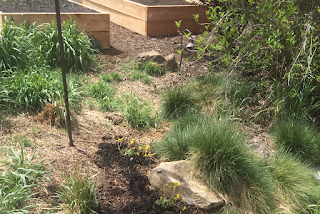 I planted the three Basket of Gold by the rocks near the water feature.  They're really common here and are often planted in rock gardens where they like to cascade.  In order to plant I first have to pull grass but I can't dig with a shovel since the drip lines are buried.  I know because I cut a line, and after that I switched to digging with a trowel.  The soil is very nice and drains well so the towel worked fine. I have a Stella de Oro day lily, a Munstead lavender and three creeping phlox still to plant - another day. 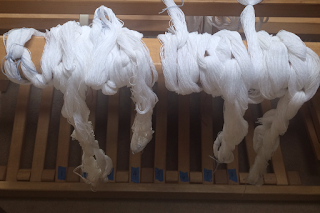 This is what I'm working on now - it's the 4-yard warp for my profile draft dishtowels.  After an email from Linda Gettman, another dishtowel weaver, I realized that all my calculations were based on 24 ends per inch, but in reality most dishtowels with 8/2 cotton are woven at 20 epi. I had to recalculate everything which is a far as I got yesterday.  I really wanted to get further today but already it's time to get the chili on the stove.  It's a good thing I'm retired and have all the time in the world, so I can lose track of it a little bit every now and then.

Yep, 8/2 does nicely at 20 epi. I have a crackle warp on the pup right now in 8/2 myself at 20epi. Threading is always a slow process for me.Half way done. If you have a growers market many times you can get some nice plants at good prices. Ours has a number of local sellers for perennials and many many with veggie starts.

Another surprisingly good place to check for plants is Costco. Sometimes they have really nice landscaping plants at really good prices.

On my screen your "putrid green" is a lovely turquoise!

I love playing with profile drafts and block weaves - your towels are going to be wonderful - love your sample.

I get many plants from Greenleaf which has mostly folks with disabilities working there starting the plants out on the farm and working at the nursery. But another favorite place is BiMart - is there a BiMart in Bend? Ours has tons of plants, all kinds, at good prices. I just picked up 3 hanging baskets for the deck yesterday as they get in a huge selection for Mother's Day. I'll go back later in the week to pick up plants for the deck planters - I'll hit both places for those.

Oh yes; BiMart is my favorite source for garden starts!

BiMart, Costco and Fred Meyer - sale prices are my favorite places to buy plants in Bend. Lowes and Home Depot have good sales too. At the end of June/JUly Shopco has good sales on plants (North end of 3'd street).
Stephanie S