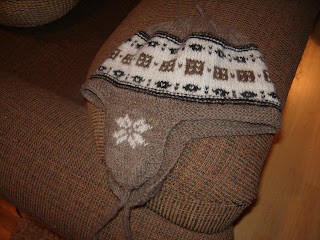 I got a commis-
sion for five hats last fall. No problem. I think I could knit them in my sleep. Oh, and by the way, can you make one of them a flap cap? No problem. I'll knit a hat and add flaps. I quickly discovered that a flap cap isn't a conventional hat. The flaps are knitted first, then the cast on - cable cast-on, that is - and then the cap. The problem lies in trying to knit the non-flap parts without ribbing and still get a hat that fits. I couldn't find patterns so knit this hat for Ian as a test. The yarn is handspun from our Shetlands. The commissioned hat I knit was similar. 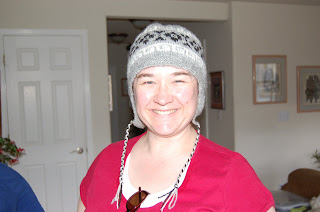 About a month ago the same person asked me if I would knit a flap cap for a birthday present. By then I had realized there was the flap cap and then there was the Peruvian chullo hat, which I now prefer. I knit this for my son-in-law. DD Chris models it while dropping off the kids for us to babysit. I like it better but it has a band of garter stitch and I would prefer stockinette without the garter running in between the flaps and hat. 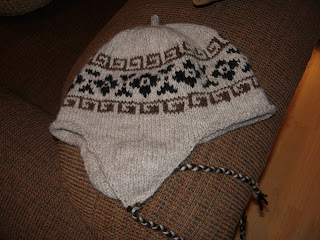 So then I made this hat. The band rolls - of course it does. It's stock-
inette. I don't know why I thought it wouldn't. Wishful thinking I guess. Grandson Kiernan says he wants it - doesn't care if the bands roll. He thinks maybe one day they won't - he doesn't care. Bless his heart. 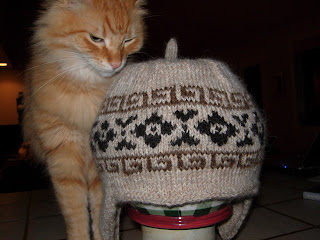 I finished this one tonight. Can you tell we only have sheep in four colors, now three since the black one died of colic last year. This time I knitted the first row after joining the flaps to the body, then one row of purl across the bands only - and then the rest in stockinette. It rolls a little but I'm hoping this hat will be okay. Charlie looks skeptical and I tend to agree. I'll have to wait until it dries to try it on. 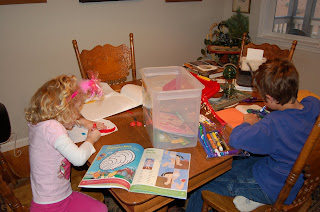 I don't know how I find time to knit or do anything else then I'm baby-
sitting. Where are those kids anyway??
Posted by Sharon at 9:28 PM

I was thinking that first hat looked mighty sharp, and then kept going and ready all the logistical problems. I suppose, since flap caps tie on, that the fit that ribbing provides isn't really necessary....

How long does it take you to do one of these caps Sharon? If I spun the wool, and you had the time you wanted to spend, how much would it cost?

ps, they are gorgeous!

I like all of them. The rolled edge...looks like brim to me. What's the point in handknitting if it look like it came from L.L. Bexn?

I hope you have a lot of that black wool stockpiled! Otherwise you will be in the market for new sheep to keep your colors going!

I do think they are all great. Love the snow flake on Ians hat!

Great hats! I made one and it was a disaster. I think the pattern was to blame. Next time I try it I'll look for the Peruvian churro hat pattern.

I always did about an inch of corrugated ribbing between the flaps - since I was using angora, it made for a fuzzy, soft edge where the cap hit skin. Garter also works, and works well if you use at least a size smaller needle for the garter stitch portion.

I love the patterns and the natural colors. I did tell you about "Folk Knitting in the Andes" didn't I? It's got actual patterns for the ear flaps from different locations (kind of like language - they have their own dialect).

Your yarn worked up great in all of your hats. Great pattern in each of them. Your kitty sure looks like she's enjoying the last one pictures. Cute!

I like your hats. You are inspiring me to make that my next knitting project.

Janet, in Dublin, moving to Seattle