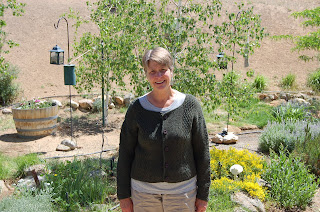 I finished my second Sonnet sweater, from my repur-
posed yarn. I chose hip length because so much yarn was lost to moth damage. I love the buttons which I got from Earthhues at a conference about four years ago, but I'm just not crazy about the length. I'll have to see how it works in sweater weather, when I'm not wearing shorts. 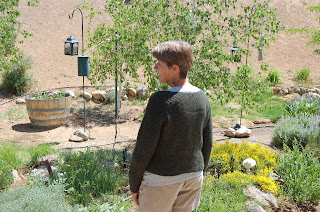 The sweater is a bit dumpy and I don't need any help on the dumpy score. At least at waist length I can't ask if it makes my butt look fat. I spun this triple-ply yarn from Border Leicester moorit and overdyed it with teal at least ten years ago. I don't know why I didn't put the whole thing in the dumpster way back - it's oh-so-scratchy yarn, but it really looks good with the stitch definition. Success will be determined by my wearing it more than once. 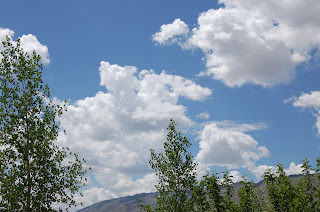 I've lived here for over 20 years and we always get weather on Memorial Day weekend. I stopped thinking of it as a camping opportunity a long time ago. After lunch, the clouds started forming and Eddie, mister tough guy, master dog of all, ran into the house and cowered in his bed. 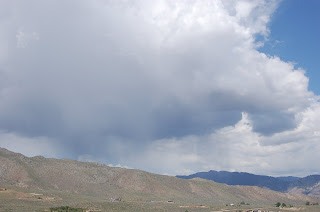 The clouds with some thunder have rolled through all day, but no rain. That's disap-
pointing. It was a yard-work kind of day for us, which most summer days will be from now on out. It's us against the weeds. Neighbor Tom was doing yard work too and called to see if he could come down for some llama poo. 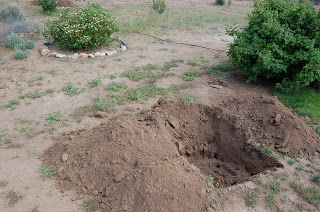 We traded him composed llama poo for holes. The departed neighbors offered all of us all their trees and I've tagged three of them. In between trips, Tom used his backhoe to give us our hole presents. He had dug two and we were pulling weeds, when he popped into front yard to check on the last hole. It had occurred to him that it might actually be where the water comes to the house from the well. He said he's a dowser and asked me for two wire coat hangers. Then on second thought, he said, never mind - he'd bring his own on the next trip down.
I've never been quite sure how I feel about dowsing, or water witching. When we bought our property, our agent whom we respect and trust, suggested we have it dowsed. His seriousness left me with questions. Ian called to me when Tom returned. I came around to find Tom was standing on the spot, with a brass l-shaped rod in his work-gloved hand, which he had formed into a loose fist, thumb side up. As he walked, the rod moved. 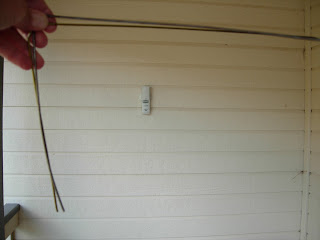 It kept pointing to the spot that we had originally chosen for a tree hole. It was making me crazy. Let me do that, I said. I thought it had to be bogus, but that wire swung around, no matter where I walked, and it pointed to that same spot, i.e, the pipe from the well. I felt like H2O Ouiga Board. Then we used the coat hangers, which I have tried to show you here. When the wires cross, the water is below that point. These are the only two wire coat hangers we have left and I told Ian that we have to put them someplace safe.

At this point, I'm sure you're hitting the unsubscribe button. I don't believe in ghosts or haints, but I've developed a respect for the art of dowsing.
Posted by Sharon at 5:23 PM

I'm not sure what to think about dowsing either. Eric Sloane has a pretty funny write up about it in one of his books (he's a non-believer).

Dowsing is interesting in a spooky, hair on the back of the neck way.

Some day there will surely be a nice scientific explanation for dowsing. Because it does work. It's kinda like particle physics -- we can observe that certain things happen, but we can't yet explain why.

LOL, we have had experiences with dosing and frankly all good. On a 1700's house in VT we needed to find the septic. Dowsing did the trick. When we built here we had to put in a well. None of the drillers will drill without it being dowsed first. Why? Well, they don't want to be responsible for NOT finding water. We drilled at the marked spot and hit 60gpm, capped at 32gpm, some places up here are lucky to hit 8-10gpm and one one place not too far from here, 4 test wells produced nothing even after 500 feet.
I like your sweater and I think the length is nice. I relegate all sweaters I don't love to "barn wear". The animals aren't fussy what I look like as long as I'm there for them and it's always nice to have a sweater you can throw on and not worry about getting dirty etc.

I've never had any dowsing experiences, but it's been so persistent that I bet there's something to it.

The sweater looks great. I like the color and am in awe of people who spin then knit!! I've been wondering if there's a way to make a scratchy yarn less scratchy. (I have some I want to weave with.)

I love the picture of the clouds in this post. Beautiful sky!!

I believe in dowsing and have seen it work several times. Keep those coat handers!

I have no opinion about dowsing, other than I will have to have you show me next time I am up there. As for the sweater, I bet it would look great over a skirt.

Your sweater is far from dumpy. The color and pattern is great.

I don't know much about dowsing but if it works go for it. Must have been a strange feeling when the wires moved.

Pictures of the moutains and clouds are beautiful.

No comment on the dowsing. Maybe no comment on Sonnet, either. After trying it twice myself, I'm thinking there are much better patterns out there. One I want to try is the Sunrise Circle Jacket....

I dowse regularly - I had to locate the water line from my well to my house so that I wouldn't perforate it with t-posts! I've variously found water pipes, sewer pipes, and once, even an electric line. It works - I don't care why or how...

I like the sweater. I've never knit a side-to-side. Dowsing is very interesting. I'd like to see someone doing it. Is that a new haircut?? Looks nice.