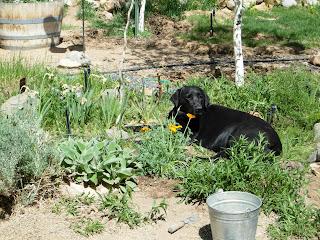 This entire day was taken up with yard work. The basins around our trees had been filled with blowing dirt and grass - both need to go so the drip irrigation on the trees will be effective. I'm about a third of the way there. I came out of the house to find that Sammy decided to make herself an ornament in our only flower bed. I put a watering pot there for now to disabuse of that notion in the future.

I found my St. Francis laying in a lavender with his popped head off. I forgot him when I brought everything in last year, and he wintered over outside - obviously, not well. I weeded, watered, fertilized and the only thing that looked different after I was done were the three California poppies that I found at Costco. I've looked for them as plants for the past three years and no one had any - just as seed. Costco is goofy. 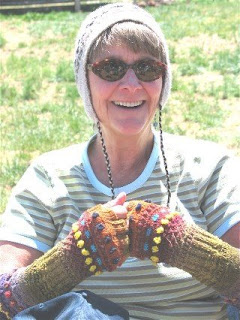 Carolyn took this picture of me at the last guild meeting, modeling my hat and Nancy's fingerless gloves. They go all the way to the elbow and are knitted from Noro sock yarn, plus bits of other sock yarns for color pops. Nancy told us that Jimmy Beans has it on sale and I was suddenly obsessed with making a pair of my own. She made up the pattern as she went which necessitated some ripping out. I've been looking at the Vogue book of colored knitting patterns that I checked out from the library, getting ideas. 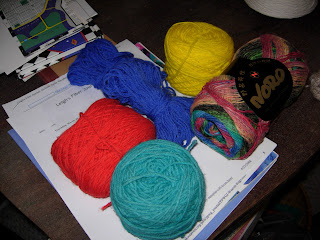 I think the Noro is just discon-
tinued color pathways. I bought this skein last weekend when DD Chris and I were shopping. These others are from white sock yarn that I bought from Robin and Russ and dyed a million years ago, at least. I think they're going to work well. I might add some black too, just because I think black makes colors pop. I am anxious to get started but also very close to being able to assemble my Sonnet sweater. I feel like a deer in the headlights.
Posted by Sharon at 7:32 PM

I really like the hat. Sammy looks so happy in the flowers. ;-)

I haven't knit with anything Noro yet.....but your post tempts me!

Sammy sure has made himself at home.

Looks like your all decked out for winter. Nice picture of you and the hat and glooves.

I went out this morning, looked at my flower (grass) bed and went back in the house.

Love that photo -- you look like a "knitter extraordinaire"! Very neat mitts.

Hi Sharon,
To answer the question you left on my blog. Yes, Yes, Yes! The Best of Doubleweave is a wonderful resource. It truly is the best articles that were published in Weavers Magazine on the subject over a 20 year period. There are 28 projects and 11 indepth articles and I swear that I've gleaned something from each one. One of the best projects was sent to me as a Christmas card last year, it was a take on the poem - Christmas Day Is Coming and it had the poem printed and a weaving with the penny inserted for the old man's hat . . . it was fanastic! This will be one of the best $30.00 or so dollars you can spend.
Cheers