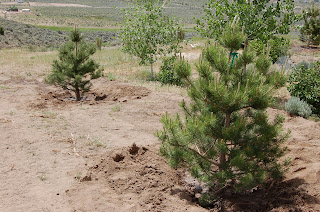 When Sammi's "dad" called us to say that they were losing the house, would we take the dog, he said that we all needed to take out his trees. He had spent a lot of money in trees and drip and once the well was turned off, they would die. Thanks to Tom's backhoe, we neighbors have accomplished the job of reallocating all of the trees. Ian and I only took three and it took us the morning to get them them seated. These Austrian pines are two of probably two dozen trees that needed to be moved. I didn't have clue how heavy they'd be or how much shoveling was involved. 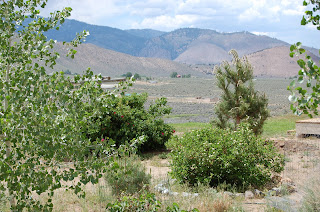 We got the plumb of the collection and I'm not sure why we were so lucky. The impor-
tance of Austrian pines is their quick growth and value as wind break. We have planted a number of trees to the south of the house, but only two are coniferous. We need a year-round wind break. 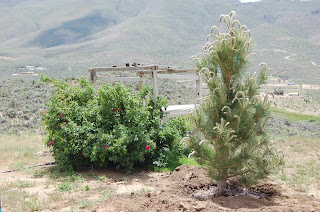 This tree with it's ten inch candles will be deck shade. The candles are oriented to the left and I'm not sure why. I don't know if that's from where it was planted or wilt. I hope not wilt. It took us hours to put in all three trees and I'm sure this one, the last to go in, was the most stressed. I'll update in a month. 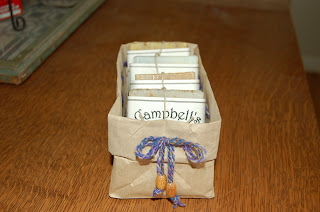 Our valley has another fund raising dinner and silent auction tonight in the fight against the water thiefs. They are going to take us to court to steal our water. We have an attorney that we need to pay. I meant to get a dish at Michael's this week but my pre-retirement time is distorted. I sent Ian with four bars of my soap in one of his used lunch sacks, repurposed like this. It was last minute and I was happy at how it turned out. 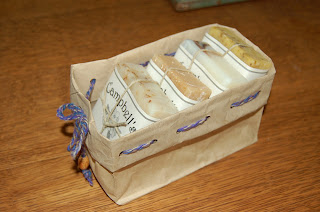 I probably will never need a container like this again, and probably couldn't make one if I needed to since I've wrenched my shoulder out of it's socket patting myself on the back. Truly. I need to be retired. Do you know anyone who needs to be retired more than me? Honestly.

Meme. That is the question that Mim posed when I tagged her. So I phished and found that the name is astoundingly and profoundly appropriate.

A meme (pronounced /miːm/ - rhyming with "cream"), is a postulated unit or element of cultural ideas, symbols or practices that gets transmitted from one mind to another through speech, gestures, rituals, or other imitable phenomena.

Think about how we click to see who's commenting or who is subscribing. If you haven't already fallen asleep, read on~

The etymology of the term relates to the Greek word mimema for "something imitated".[1]. Supporters of the concept of memes believe that they act as cultural analogues to genes, in that they self-replicate and respond to selective pressures.[2] Memeticists have not definitively empirically proven the existence of discrete memes or their proposed mechanism as they do not form part of the consensus of mainstream social sciences. Meme theory therefore lacks the same degree of influence granted to its counterpart and inspiration, genetics.

Richard Dawkins first introduced the word in The Selfish Gene (1976) to discuss evolutionary principles in explaining the spread of ideas and cultural phenomena. He gave as examples melodies, catch-phrases, and beliefs (notably religious belief), clothing/fashion, and the technology of building arches.[3]

Meme-theorists contend that memes evolve by natural selection (in a manner similar to that of biological evolution) through the processes of variation, mutation, competition, and inheritance influencing an individual entity's reproductive success. Memes spread through the behaviors that they generate in their hosts. Memes that propagate less prolifically may become extinct, while others may survive, spread, and (for better or for worse) mutate. Theorists point out that memes which replicate the most effectively spread best, and some memes may replicate effectively even when they prove detrimental to the welfare of their hosts.[4]

A field of study called memetics[5] arose in the 1990s to explore the concepts and transmission of memes in terms of an evolutionary model. Criticism from a variety of fronts has challenged the notion that scholarship can examine memes empirically. Some commentators question the idea that one can meaningfully categorize culture in terms of discrete units.

Okay, okay. That was dense and I apoligize - I just love how we bloggers mutate (according to theorists) and spread. It's cool, doncha think.
Posted by Sharon at 6:13 PM

Excited about lunch tomorrow Sharon! Would you bring some of you soap with you? I have always wanted to buy some but never seem to remember when Im there. Thanks! See you at GBB!

Once you retire you might enjoy exploring some of Daniel C. Dennett's works and forays into memes and memetics. Darwin's Dangerous Idea is quite readable.
I liked his books so much I named one of my dogs after him....:-)

Oh poor tree, I would imagine that a lot of water and TLC will turn it around. I certainly hope so. Did you take the dog????

The soap looks great but who is the thief trying to take your water?

Well, with a little bit of going back in posts, I found Sammi's adoption! Hope you had a good lunch!

Who would have thought one word would have such meaning? Not me that's for sure.

I'm sure your trees will turn around. They're just upset about being uprotted and moved. Once they realized what a great home they have they'll grow like crazy just like Sammi.

Love how you displayed and sale your soap!!!!

Thanks for the info on memes! I never knew where that word came from....thought it was just a blogging thing!

Somehow I'm surprised that Austrian pines grow out there - but it sounds like their uses are the same as here. Usually when we've planted large trees (and those count as large for transplanting), the first year they kind of struggle to survive, and the second year they start to grow. Here's hope that yours survive and prosper!!

So do you have retirement countdown timers set up everywhere??? It's coming soon - really!!! Enjoy!

Get some B-1 on those trees. Do it every day for a week, at least. They will be just fine. Don't stint on the water, either. The candles are leaning left because of a)wilt and b) wind...

I know they'll survive - you got soft dirt!!

What a great job repurposing! I sure hope all three trees make it, as I know why you need a windbreak.