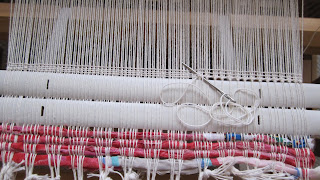 I woke up this morning exhausted after having dreampt all night about fixing the warp. I decided that the worrying was worse than the fix. Since I was only adding an extra inch, I didn't check for threading errors and I should have. See the bundle of three warps an inch from the left? That fix was pretty annoying and required a string heddle. I really liked working the hemstitch against the flexible blind slat. It went quickly. 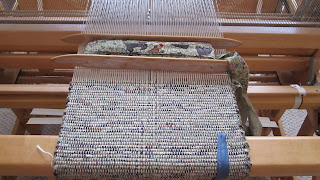 I sewed all the strips this morning and cogitated about how I could fix my problem, if there were any short cuts. I hated to pull the warp all the way forward and then rewind it, but if I weighed the inch separately, I'd have to fool with letting it forward for all 16 placemats. I decided that would probably take more time than the proper fix. I'm using two fabrics from the destash box that Benita sent me, as they both had the same value of green - about two yards of each. 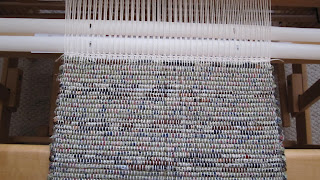 The first mat is done. The coolest thing about hem-
stitching is that when I take these off the loom, I only have to cut between the slats and they are finished. No fringe to tie! I can't remember who suggested this, but thank you!! I have a craft fair on the 28th and I think these will easily be finished in time.
Posted by Sharon at 10:34 PM

I think you did the right thing by doing it the 'right' way. Actually I know you did. Experience :-) LOL.

Hope you sell them all, with all the work you had to do.

I have actually cut the top and bottom of a heddle, and put it where I needed it and tied it on with some 8/4 warp.
I love the hem stitching.....I have never done it, but I am going to try it.

Glad to see that more people carry on weaving during thei dreams... It's what I did this week, too. But the other loom has been moved and a warp is on it. I'm threading now.

I love the hemstitching.... do you have another post that details it further, or maybe a future post!