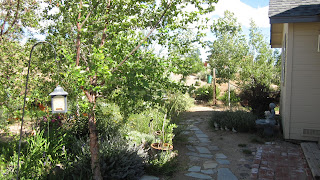 We got home yesterday afternoon about 2:00. That's the longest I've been gone from home - three weeks altogether. I had a great time everywhere we went and I'm thrilled to be home again. Apart from a few hot days, it's been temperate here, with more thunderstorms and rain. 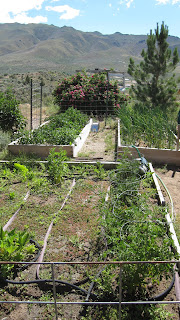 This is all the growth our garden has been able to muster, and it's the middle of July! I'll be going to the farmers market I can see. I'm appreciative for our CSA basket produce, even if some of it's a learning curve. Fava beans?!! 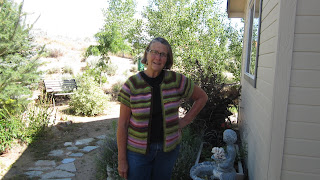 I did finish a trip-
knitting project. It's simply a neck-down raglan from Noro Kureyon sock yarn. I figured out the math before we left and it was great company over the past three weeks, until I added the front button bands in seed stitch - a disaster!

We were going over the Grapevine which is a really rough patch of road since last years snowstorm. I panicked and emailed Diane for help, but it took forever because my fingers were bouncing all over my phone keypad. After several email exchanges, her advice was to go down three needle sizes for a seed stitch band. I ripped them out, reknit and bingo! A word to the wise - seed stitch ribbing is three needle sizes down. I took it out of the wash this afternoon and have worn it since. It's now 63 degrees outside and this is the perfect sweater for it. Diane - design for smaller gauges so I don't have to suffer like this again!! 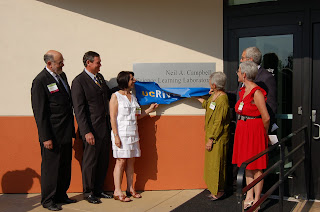 This is why we made the trip to SoCal in July - the naming ceremony for the Neil A. Campbell Science Learning Laboratory. Ian's brother Neil wrote a college entry-level textbook entitled simply Biology. He was always aware of the struggle undergraduates face, having started himself at a two-year college before transferring to a four-year school. 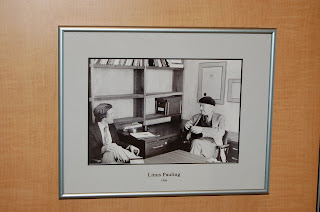 He wanted to make biology simple. Neil inter-
viewed successful biologists as part of his textbook because he thought their excitement would be infectious to incoming college freshman. 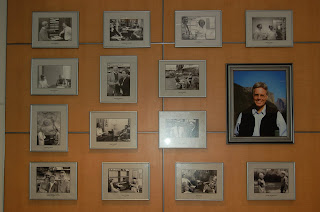 These are pictures from those interviews. The original book has been expanded to also included high school, and, John Kay, a high school AP teacher in Hawaii for 40 years flew in for the ceremony. Beth, his editor, said that all the texts are now published in 17 languages and they figure they're reached 6 million students. 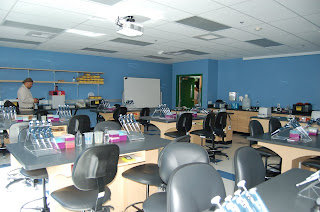 What makes this lab unique is that it's for under-
graduate students, not declared majors. Neil graduated from UC Riverside and after leaving Cornell to write his book returned here to teach. He and Rochelle created an foundation for science education, so it seems only fitting that he should have a living legacy, even though he's no longer with us.

That's this cook's tour of an emotionally charged event - the UCR video does a fabulous job here. 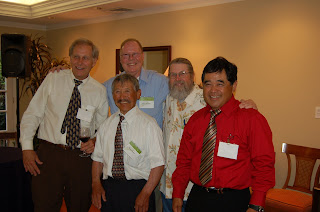 A reception followed at the chan-
cellor's home afterward and someone thought to take this picture, one of my favorite that evening. John, Ian, Petey, Masao (Mouse) and Minehiro (Mini) - Mouse and Mini are brothers - all competed along with Neil in gymnastics at El Camino College. Neil was the glue that kept everyone together all these years, and he still is.

I actually started to call you this afternoon, and then hung up before it rang because I was afraid you were still in SoCal and I'd interrupt something. Glad you are home safely; we'll have to talk soon!

Welcome back!! I'm glad you had such a lovely trip (and what a cute sweater to show for it), but you have been missed very much.

What a fabulous honor for Neil and what a contribution he has made for students studying biology.

What a great legacy. I still treasure the memory of meeting Neil at your house!

Fava beans - pasta fagioli. You gotta do it!!

Wow, this is something great!

Welcome back! I see you were in the video, wearing black sparkly clothes?

Congratulations to your family..what a great tribute!

It seems all of us in blogland are having atypical summer weather.

What a lovely reason for a trip! Very touching and poignant!
Love the sweater!
We learned the hard way to think ahead for our CSA and put down what we dont want - either things we hate or things we alrady have ourselves (for instance, I have a lemon tree, so I dont need lemons). Our garden is doing better than last year, even tho we had a set back while on vacation...last year ours was much more pathetic than yours