It's Been a Hard Week 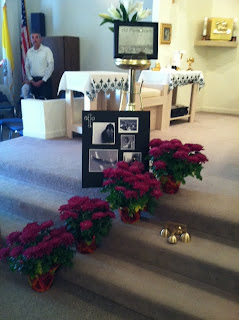 Our church is in the base chapel for the old Stead air force base, which is where the Reno Air Races are held. Whether or not you like air races, this is small community of fans who have suffered a devastating loss. The church was packed this morning. We even had an AP videographer and photographer - and why. They shot pictures for the first 15 minutes of Mass. What did they hope to get. People camp on our church campus for this event and have for years. Two of the traditional campers are among the dead. Our cleric was a first responder. He said people mobbed him when they saw his Roman collar.

It was a draining morning and I'm so glad I had a great lap swim. I took a sandwich and was eating it at my favorite regional park when Amy called. She lives right by the park and I availed myself of some friendship. Two fires in the valley last week, the air race wreck and then a memorial celebration party last night for a friend much too young to be the subject - it's been a hard week.

I don't want to end on a down note. I do love this album. I bought it several years ago and I see it's been amended to include Bob Marley. Hope is good.
Posted by Sharon at 8:23 PM

Oh, my. I saw news of this tragic accident elsewhere, earlier this week, but I had forgotten it was so close to where you live. It must be a truly horrific blow to the community - both the people who live there year round, and those who visit regularly. My heart goes out to all affected.

I was concerned for you when I heard about the accident. You've had a tough week....healing thoughts headed your way.

I just read about the air show crash and I am very sorry it happened. When I read it, I thought of you and if it had affected you any. I see it has. My prayers and thoughts are with your community today.

when I heard the news I immediately thought of you and your community - tragic losses....that continue to mount.

do you think fall will be any better than summer? it arrives later this week....maybe we can all hope....

I am sorry for the loss at the airshow. It is truly sad and there are no words that anyone can say to make things better. My husband and I have been to many, many airshows being in the military. There is one here in Virginia Beach this weekend with the Blue Angels. I am saying a prayer that everyone will be perfect.

Any loss is hard, but those that hit close to home are hardest. To have that many in such a short time must be devastating.

The song is perfect...

So sorry your community is going through this. So very sad.