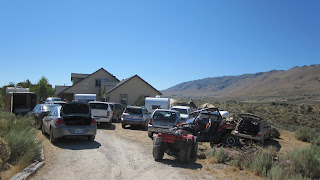 By Saturday everyone who was coming had arrived. Most everyone came from somewhere in California, and while this isn't central by any means, it is a gathering spot. 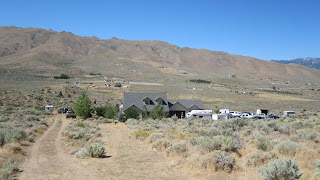 This doesn't exactly represent the "campus" as the other side of the house is lined with tents, which is why Petie comes early - to help Ian set them up. He left this morning and unfortunately got caught in the traffic in Carson City from the devastating shooting incident - the only dark cloud on the whole weekend. 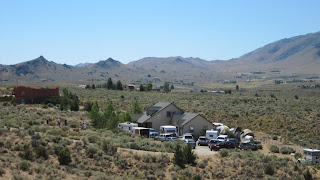 Ooops - sorry. This is the only shot I have of the double elimina-
tion horseshoe tournament, and all that shows is the pits and practice play on the left, as the actual tourney was the next day. It was the hit of the weekend and I'm afraid I got swept up in it. 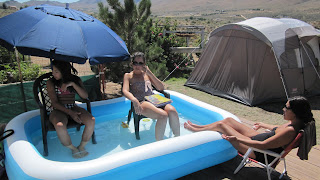 The kiddy pool on the deck had a second life after the kids decided the water was too cold and went to play in the dirt instead. 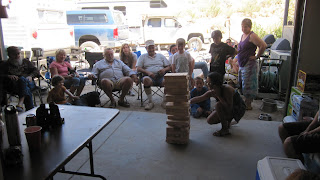 Giant jenga was a hit for the second year running, though DS Josh says the pieces have warped since last year. He and Marsh are going to make kiln-dried jenga for next year and suggested this set become kindling. Can do! 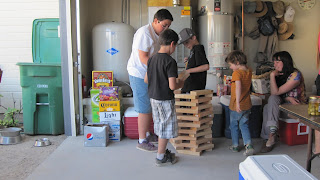 The boys used the pieces for dominoes on the garage floor and then started building with them - two are my grandsons and two are our neighbor's grandsons. 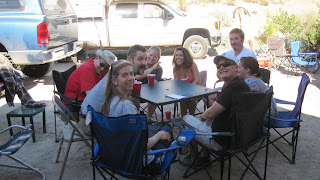 Every one of these young people is significant to me but that would take many blogs to explain so I'll just say the young man on the right in the white t-shirt is my youngest son and the only one of my children to actually look like me - thank goodness - and the ham on the left side with the mutton chops is my grandson from Amhurst, MA, - uncle and nephew. They look and sound so alike it's uncanny. His parents were here three years ago and they were just as stunned as the rest of us. Genetics! 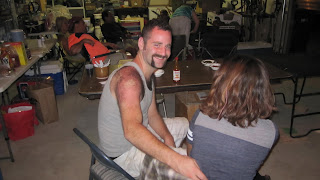 And this is John, my oldest grandson, and if you are new to my blog this year, I posted about how we met here, i.e., he was adopted out.

I was on my way to the gym, after which I'd pick up the "kids" from their kennels. Change of plans - I got to have breakfast with John, girlfriend Shannon and DD Chris instead. I was a little late in my kennel pick-ups but still inside the deadline. And oh my, were there a lot of dirty cars going West, headed home from Burning Man.
Posted by Sharon at 8:41 PM

Well, what a grand time! I can imagine warped Jengo pieces would be very challenging. The pool with shade, priceless.

What a gathering!!! I love your idea for the giant Jenga pieces...it's hard to believe they could warp out there in the desert!

Looks like it was a grand weekend!
Fun to go back and read about your oldest grandson. How wonderful that you all were brought together and that he's a part of the family.

Sounds like a fantastic weekend of fun! I remember my mother sitting in a lawn chair with her feet in the kiddie pool when I was little. At the time I thought it was weird -- now it seems like a great idea.

Hope you're not too lonely with all the company gone.