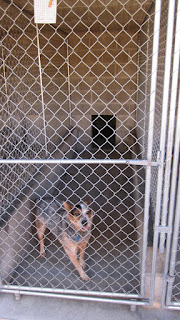 I dropped Buster off at doggy jail. For locals, it's Fantasia Pet Resort and Buster actually likes this place - we've used it for ten years, so that translates at a recommend. 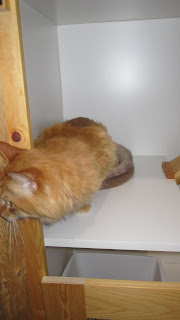 Then I drove out to Verdi (California state line on the way to Lake Tahoe for non-locals, i.e., long way from home) to drop Charlie off at the Cozy Cattery. This is a first time for us as Fantasia no longer boards cats. We put his bed and toys in his three-story unit, and he plunked himself on his bed to do a little snoopervising. He went from yowling to content. I think this is also going to be a recommend. 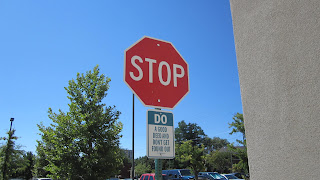 I wanted to get the kids dropped off so that I'd be at the fitness center for the supposedly quite pool hour from 11:00 to noon. I was early so spent a half hour on the elliptical trainer in the gym, when back to the locker room, suited up and showered for the pool to find the water draining from the pool. The sign said - Mechanical malfunction - pool closed. Groan. I saw this sign on my way out of the parking garage. Good one. 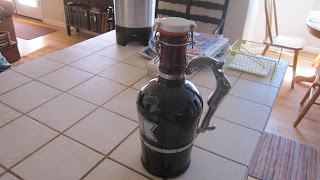 I stopped at the Silver Peak Brewery and got my Deschutes Growler filled. I know a lot a regional beers will be present and I wanted us to be on the map - then it was off to Costco where I discovered I didn't have my list. Aren't cell phones awesome?! 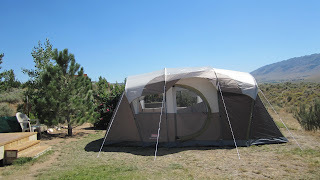 Ian and Petie had the inaugural tent up when I got home. It's a first time installation so they we working with mistakes in the instructions and missing parts. They reasoned in out in the end - this nylon palace sleeps ten, or so it says. 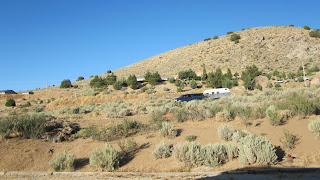 The first trailer arrived a little after 6:00. DS Josh, Missy and the boys are here from Oregon, and this trailer is a far cry from the massive fifth wheel they used to sport. He saw this for sale, half covered in snow and bought it after the first of the year. It's vintage and with the help of Jason, he has rehabilitated it, after hours on week ends. It's been exhausting. 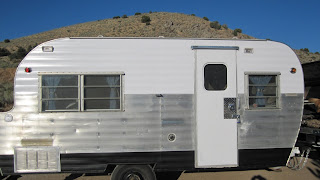 They have named it the Road Toaster because they think it looks like an old kitchen toaster. There is plenty of work left to be done, evidenced by the padlock of the door - to ensure it wouldn't fly open on the road. 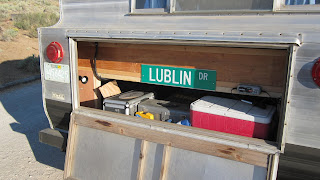 That extra little blip on the back is the storage space which is thoughtful addition. Yup - that's their street sign from the house they left here. I hear it's a long story - looks pretty short to me. 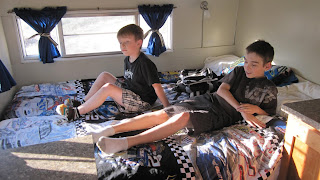 The boys love it. When we were in Bend in June, Josh hadn't finished laying the flooring. He said it was just going to be a hollow shell for hunting. Now it had this bed, cabinets and a dining area that makes into a bed for the boys. It was hard work for the whole family and I see the pay off in the boys faces.

It sounds like you're ready for a great weekend....ENJOY!!!

If the kids went off to the resorts/spas this must be a pretty crazy holiday weekend at your place!

I will never buy another tent again that doesn't have its own door. All tents should have a door.