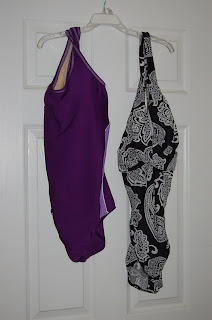 Yesterday was my first swim lesson since I was pregnant with my grown son, okay, 40 years ago. I bought a suit from Costco and dove right into this thing, really. About ten days ago the suit began to fail and Ian encouraged me to get online and order one immediately, which I did. I found suits on sale at Lands End and ordered two, but they took a week to get to me, three days to get to Reno and four to be delivered, which included UPS transferring the package to the USPS for delivery. By then you can see the shape my old suit was in. On my last swim, it was literally trailing behind me. You get what you pay for. The lesson was awesome. I learned a better way to do the free style and stayed another 45 minutes to practice, using a whole new set of muscles. I can hardly move today. 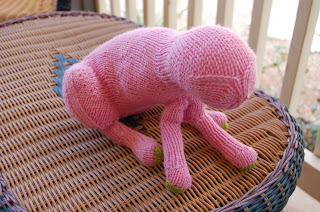 In addition, I'm still a little tired from Labor Day weekend so slept late this morning. I was having my coffee and working on the jackalope's ears when the songbird activity arrested me. 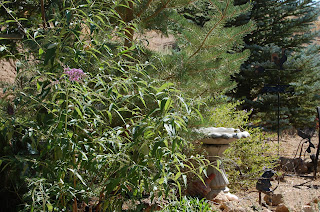 There was a crowd in the birdbath and the water was flying every-
where. We've seen as many as twelve in there at a time from the bedroom window. I got the DSLR, filled the basin back up and sat down to wait for them to return. Ian came out about then and asked if I had our neighbor Ken's phone number (he's on the VFD) as there was a fire across the valley. 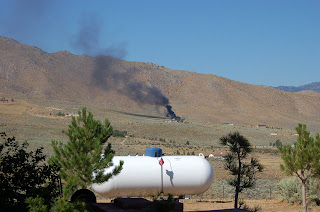 I walked around the end of the house, and saw this - and panicked. For two minutes I'm sure I did nothing but run back and forth and hyperventilate. Finally I realized I had my cell phone and called 911. I was stunned at how shaky my voice was. Ian called Ken who called the fire chief. 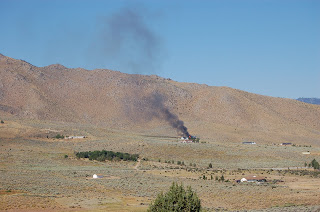 And we waited. It was painful as the minutes stretched and the flames rose. Click for big. 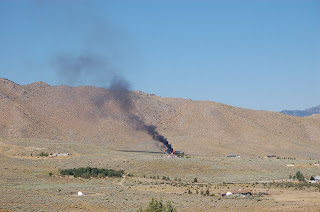 My phone says I called at 10:21 and at 10:45 the first fire truck rolled up, our little VFD crew. The thing with VFD is they are all volunteers and many have day jobs. Ultimately eight trucks in all attended the fire. I finally realized their priority was to extinguish the fire, not save the structure. It could have been devastating, a mini-Texas, but for once, we had no wind. Cindie just wrote me that Theresa told her that fire departments are just here to save lives and keep fires from spreading, not save our houses. I can see the reason of that, but it scares me. In this case, the news has reported, the fire started in garage. I've never seen a house burn down before, but losing my house to fire scares me to death. I think the most likely threat to the rest of us is wildfire caused by lightening, as Carol and Harry experienced earlier this week. 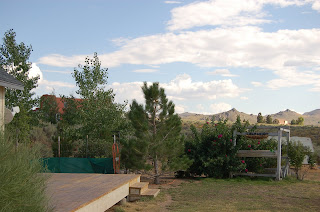 Otherwise, it was a lovely day - thankfully so. We get such serious winds this time of year that Mark Twain coined them the Washoe Zephyr, always the pundit. Our normal winds could have ignited the entire side of the valley. It was a sobering day. Our HOA logo is Red Rock Valley - Just Another Day in Paradise. This is the first house fire in the valley and that no other structures went with it leaves us with tomorrow, another day in Paradise. I am resisting the soapbox about cutting funding to police and fire protection, because I'm drained enough already.
Posted by Sharon at 9:13 PM

I understand your feelings about fire. There hasn't been a drop of rain here for months and everything is sooo dry. No lightning this year so far thankfully and strangely the fire season has been slow. But one musst be so careful and I get so angry seeing cigarette butts on the path to the swimming hole - long grass all around.

Fire is so scary and here I've got a firebug neighbor who will be out cutting knee high brown grass in 100 degree weather after 3 months of no rain....against ODF rules. If a fire starts there it will race up my hill and I have only one escape route which would be blocked by fire. So last week I called ODF on her again.....

My family's house burned down when I was 13 - just two weeks before Christmas. As devastating as it is, knowing the whole family was safe was such a relief. I am so glad the one there didn't spread.

OMGoodness! What a time you've had! That's scary to see a fire that close. Thankfully it didn't spread! I get scared when I think about living where we do. Right now we've moved over to the "red" severe fire danger in Oregon.

I don't know who Theresa is, and I wouldn't want to gainsay her, but I believe she must be talking about volunteer FF possibly even just those in that area. I am working in Texas right now, and I can tell you that they have two priorities; saving homes and keeping it from spreading. I know that doesn't mean much to you if that is the case with your areas fire fighters.

Wow! Scary! I'm glad you still have your paradise.