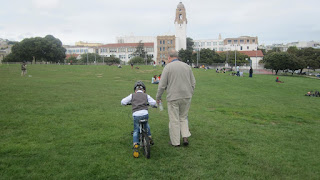 We drove to San Francisco last Thursday morning for grand-
parents day at Noah's Waldorf school on Friday morning. After checking into our motel, and before I go any further, let me recommend where we stayed. It's the Cow Hollow Motor Inn on Lombard Street, very close to the Embarcadero, Fort Mason, the Exploratorium and many other attractions. We paid less than $100 a night and that included parking. If you've ever stayed in the city, you know that parking is an uphill battle. First you have to find it and then you have to pay for it. We bought a bus pass and enjoyed the Muni transit instead. We caught the 22 Fillmore which is its own form of entertainment, and visited with Noah and Little Sharon for a while that afternoon. In spite of the forecast for rain, we were able to take Noah to Dolores Park so he could ride his bike. Michael was still at work so we caught an early dinner with Noah at Kaza on 18th Street and had our first kati rolls. We stopped at the Bi-Rite Creamery for an ice cream chaser and called it a day. 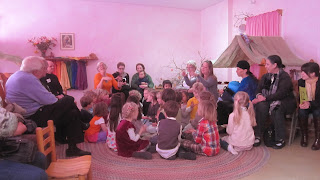 We spent the entire next morning at the Waldorf School, which started with grandparents being celebrated in a small cafe environment with food and coffee, followed by an hour of student and teacher presentations after which we visited the classrooms - followed by more student presentations. We left exhilarated and exhausted at noon. 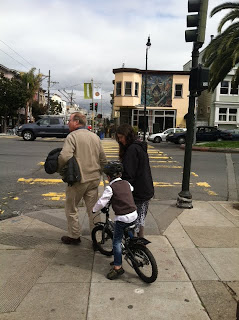 Sharon picked us up afterwards and took us back to their flat, where we once again walked over to Dolores Park. Why waste a pretty day? We bought tacos from a food truck and sat on the grass to eat them. We are just returning from a visit to Imigiknit where I bought nothing. Jimmy Beans, my LYS, sets the bar pretty high. We were going to try for dinner but Michael has to catch the train from Palo Alto and so we decided that we'd go on Saturday instead. 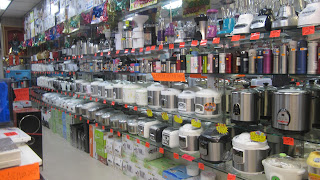 I wanted to go to City Lights Bookstore and buy Paul Madona's latest collection from All over Coffee - plus it's a must-stop shop for a bookist. We decided to have dim sun in Chinatown, since it's right next to North Beach. Can you believe how many different rice cookers this shop has?! 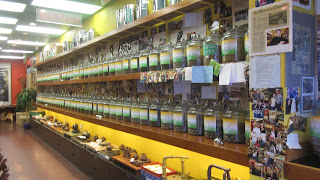 How about, can you believe how many varieties of tea this shop has??! The most astonishing thing about Chinatown is that it's nearly completely Chinese, especially on Stockton Street. That's where we got killer dim sum - 930 Stockton Street. I couldn't tell you the name and we ordered by pointing because the storekeeper spoke almost no English. Our dim sum dinner cost $7.00 - in San Francisco! 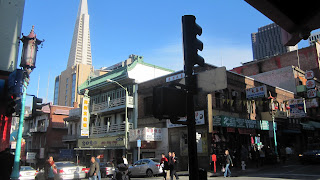 There is so much in San Francisco that it's easy to lose sight of how little real estate there actually is. Chinatown is in the shadow of the financial district and they really don't cross over. 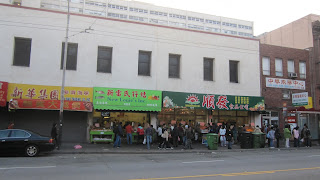 The tourist street is Grant and that's where the China Gate is, but if you want to see the Chinese Chinatown, walk down Stockton. Look at how little English is on these grocery store signs, and they're selling fresh food, very little is packaged. We eat an early dinner which is why we were able to still get dim sum, and these markets were cleaning up and closing down, hosing the fish scales across the sidewalk into the gutter. It was interesting and a little eerie to be in such a foreign place so close to home.

This is why we didn't stop at the Disneyland of ice cream after lunch.
Posted by Sharon at 9:48 PM

What fun! You've answered the question where in the world is Sharon! We hear from you so little these days.
I can't believe the ice cream line. Imagine what it must be like in summer. The book looks awesome, as I bet the bookstore is.

Sounds like a really fun treat of a weekend for all of you!

Whoa...the room in the Waldorf School is really PINK!! Maybe it just 'reads' that way in the photo, but I don't know if I could take that much pink for more than a few minutes.

Scott, his uncle and grandfather were in San Fran for the 100th anniversary of the Golden Gate Bridge many years ago, and it is still a trip Scott talks about. he says he really would like to take me there and that I would love the place. One day, we will go. Your discription of Chinatown sounds fascinating and I'd like to go there.

The only good thing I can say about the line in that video is that at least they were burning some calories before consuming way too many!

What a wonderful trip! The school sounds very interesting, and it looks like they're doing some neat things there. Enjoy your time with family!!!!

I want to know which tea shop that is! I want to smell those teas!