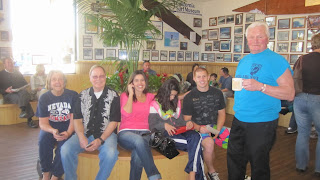 We flew into San Diego fairly early on Thursday - the worst part of the trip was the rockiest departure I've ever experienced - we bounced all over the heavens but landed without event and picked up our rental car, using Avis this time.  Even though it was cheaper, I still prefer Dollar - for what whatever that's worth, no pun intended.  We jumped off the freeway at Old Town for a fantastic lunch at El Agave, should you care to know in the future - they were a head and at least one shoulder above typical Old Town fare.

We were settled into Rochelle's house when Pete and Rena arrived from Connecticut - that's Pete with the coffee.  Margi, Elise and CJ came shortly after.  This picture is at breakfast at the Beach Break the next morning - I handed Rena my camera.  It was like a grown up slumber party, if that makes any sense. 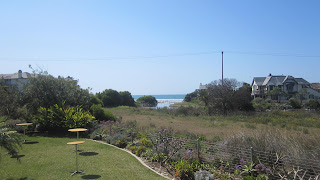 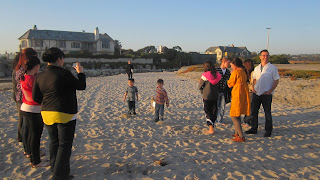 Carlos and Kristie had rented Levyland in Carlsbad for their wedding.  We didn't realize it but it's just a mile south of Rochelle's house in Oceanside, if that tells you anything about how close things are.  One of the reasons the kids chose it is because they could be married on the beach.

We walked down for rehearsal a tad late on Friday.  The officiate was stuck in traffic and the taco truck that we had arranged for the rehearsal dinner was also stuck on the freeway, awaiting AAA.  We mostly needed to get the order of procession - the wedding planners had their hands full.  Noah and Issac are charged with bringing Walter, the symbolic ring bearer to the altar. 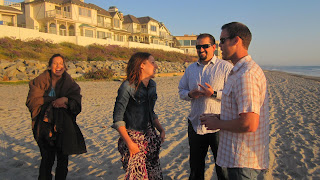 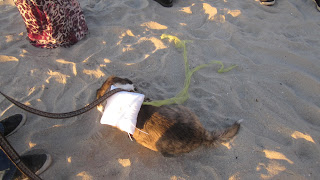 Kristie and Carlos are having a laugh with their officiate, fellow DA Sean while bridesmaid sister Elise is shivering in a sleeping bag.  Ian quipped that all the wedding gaffes got used up on the rehearsal day because the wedding day was clear sailing.  This symbolic ring bearer was exhausted. 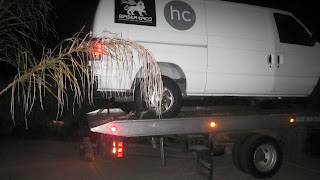 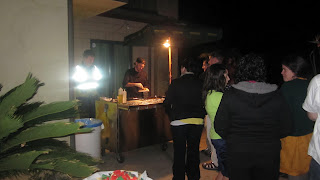 Rasta Taco arrived, courtesy of AAA, about two hours late.  They have an excellent reputation but the chef still had to set up and cook.  Daniel gets my two thumbs up - talk about grace under fire.  He delivered great good food, while disputing the AAA guys dilemma.  His company said he had to impound and tow the van, but Daniel's boss got it ironed out, had the van towed for service and came to pick him up.  All that is behind the scenes, all the while that Daniel is delivering service with a flashy smile.  It's the Hollywood spillover in LA, me thinks.

Hi Sharon,
I can't wait to hear the rest of this story, and pictures ofcourse.
And a wedding on the beach...... like in a movie.

Oh, don't you just hate those bumpy rides on planes.
i would have been reduced to tears no doubt.

That's a pretty hairy little ring bearer..who's nephew is he? ;)