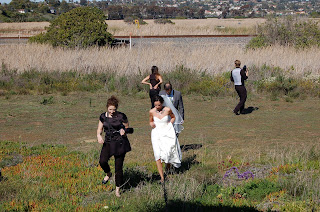 We don't have pictures of the actual wedding.  Ian had some photos on his camera and I have no idea when he took them or what it did with the DSLR because it's big - you don't just put in in a pocket.  The wedding couple have just confabbed with the photographers and are processing to the beach.  As you can see Kristie is barefoot as is Carlos.  He didn't have the camera on the beach and is now asleep - by tomorrow I won't remember to ask him how he managed the beach photos.  Marriage is like that. 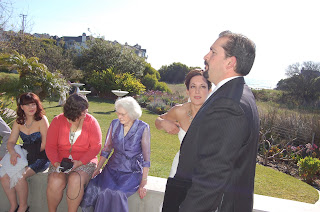 After the wedding Kristie is chatting with Sean, the officiate, the guy who was late to rehearsal because he got caught in traffic - so so SoCal.  He is also a coworker, one of the dozen DAs present.  Kristie did almost all the planning and prep work on her own, including arranging her own flowers.  She chose flowers from outside at the estate for inspiration in her arrangements, which included succulents.  I was able to get two cuttings through airport security and am trying to root them here, if I can keep them away from Charlie.

Her 98-year-old nanny sitting there on the wall in a beautiful lavender dress was her matron of honor.  She walked all the way through the sand, though was seated for the ceremony.  I want to be just like her when I grow up!  The guest list was 142 people and half that were family. 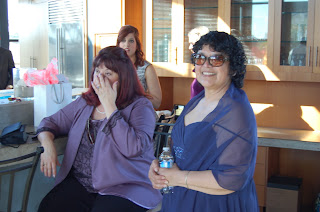 These are the two moms and they looked so pretty.  Ian is brutal with his candid shots and Terry doesn't know him well enough, but you can see that Yolanda does.  Ian's kids really take after her a lot.  Oddly, we all get along very well.  This is the wedding as well of two large Catholic families, one Mexican and one Croatian. 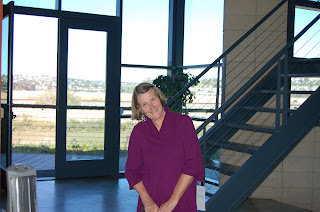 Like Yolanda, I know to pose when I see Ian with a camera.  Because Kristie was overloaded with work and wedding planning, there was a shortage of information on our end.  I assumed I would not be in the wedding party so wore a tunic, leggings and knee boots - oops.  Ian and I were the first in the wedding procession.  I just pretended I was all dressed up like everyone else. 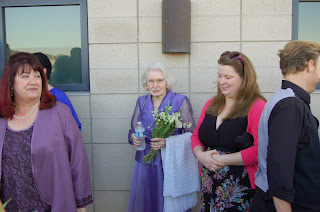 I should be showing the bride, but I cannot resist one more photo of the matron of honor.  Terry, on the left is her granddaughter!  This woman is 98 years old and they have the birth certificate to prove it, and no she wasn't born in Kenya.  She was still going strong when we left at 9:00.  I call that aging with grace and I want a piece of that action. 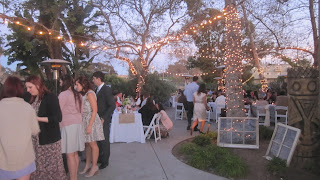 Kristie had hired a friend who is starting a wedding planning business to help with the set-up but the creative work is hers.  The seating charts are on the window panes that you see the right.  She had taken my name from Facebook that I adopted to differentiate me from Little Sharon - even she and I got confused before I added my maiden name.  It was misspelled and it affirmed my decision to not take it again after my divorce all those years ago.  For the record, it is Greve - no i, no a, no s - it's Danish. 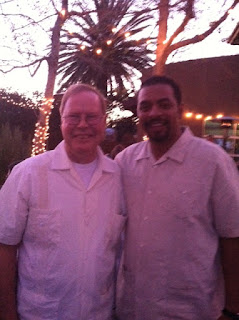 Ian loved his new Mexican wedding shirt and was thrilled that godson/nephew Chis was wearing same.  We were eating dinner when Ian said,  come come - you have to get this picture.  He and Yolanda  helped raise Chris and he adores him like one of his own boys. 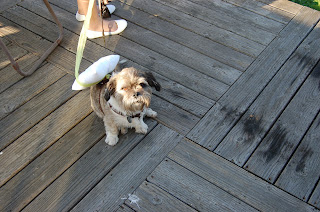 I know how Walter feels.  I've been thrashing my way through the new Blogger for the last couple of posts.  I thought I was taking a peek at it but it's stuck to me like glue.  I'm sure all the old features are present - it's just a matter of locating where they are.  I'll get faster with practice.

We got home Tuesday evening and I picked up my 500-page book for Tuesdays book club from the library on our way home - Stones from the River by Ursula Hegi.  It's an older book but I'm liking it very much.  I seem to be stuck in a time warp - it's about the same time as Downton Abbey right now.

I came home to a nasty mess with Citibank and Sears.  They cashed my bill-pay check on February 29th but can't find my payment or account or I don't know what, but it makes me think they're a pretty inept bank.  In today's mail I got a photocopy from them of the check they cashed along with a form I'm supposed to fill out and fax to their missing payments division.  I've been on the phone with them three times between yesterday and today.  They say no one in their organization can fix this.  It requires me filling out the form and faxing it - the onus is on me.  They've cashed a $400 check and yet I have to prove something?  I am so angry.  Ian told me about the new government agency where consumers can lodge a complaint so I'm passing along that information.  It's called the Consumer Financial Protection Agency and I filed a complaint with them today.  I can't fax the information that Citibank requires until I go to town again next week and I'm convinced that they're taking this opportunity to use mine and possibly other "missing payments" to invest in overnight T-bills.  I opened this credit card because Sears gave a huge discount for charging the new appliances on their card.  As soon as I get this payment posted and have a balance, I'll pay it and cut up the card.  I was suckered.
Posted by Sharon at 10:39 PM

The wedding sounds terrific! The credit card kerfuffle... not so good. Can you scan the form to submit it sooner?

I'd write to the retailer about your experience, too. You never know... it might help. Find the name of a real human (high up, if possible) and address it to them.

I open accounts like that then close them once to appliance is paid for.

The wedding looked like it was a lot of fun.

I want to be like YOU when I grow up! Finding myself underdressed in a situation like that would have been a crisis; I need to learn to handle it like you did.

My paternal grandmother is 98 (will be 99 in September) and is still going strong, too. And yes, I do want to be like my granny when I grow up. She is awesome!!!

Yes, you have the double-word verification. I switched to the comment moderation mode, which is also a pain (but only for me, I hope).

Leaving another comment; you still have double word verification! Does my blog still require you to type in WV?