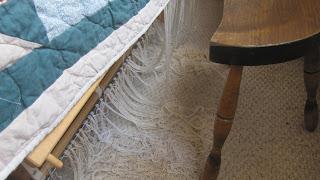 This sad mess is my dummy warp. I was in a hurry to cut my lap robe from the loom and cut on the wrong side of the knots. In two seconds the warp flew backwards and onto the floor. Who's the dummy, eh? Since the lap robes are wool and it's getting warmer, I'm thinking about setting these aside and doing some rag rugs for a change. 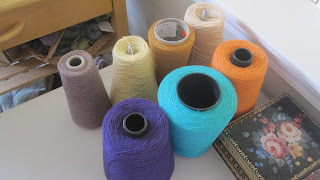 These are the colors for my current towels, minus the butter yellow that I forgot I was winding bobbins with. This is my Fiesta Ware series. 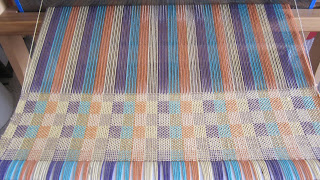 I was a little intim-
idated by the bright colors I chose so started off with butter yellow. 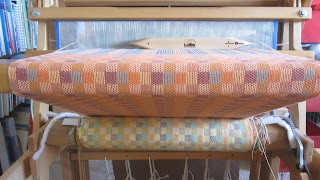 I picked these colors. There was no point in backing down, so I went for the orange on the second towel. It didn't scare me too bad. 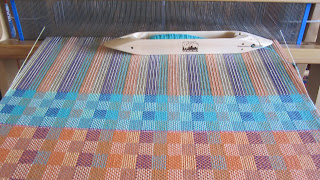 So I went for turquoise on the third towel and I was surprised how much I like it. I got online this afternoon to check out Fiesta Ware colors and decided the fourth towel is definitely going to be lime green. I'm not sure about the purple, though it's in their color line, but then so is black and red. 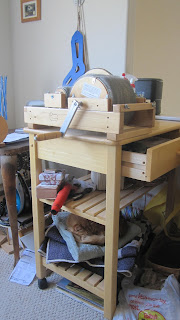 I had company in the studio today. Charlie found yet another place to curl up, though he left me the second he realized Ian was taking a nap because he exists to sleep on Ian's napping chest. We think we're turned a corner in Charlie's medical crisis. His recent lab results showed an e. coli infection and it's those toxins that have been poisoning his kidneys. He's on five weeks of antibiotics and also treatment for his kidneys. He's starting to return to his role of rotten cat and snoopervisor, which we welcome. We'll also welcome an end to pilling him, a thankless two-person task at which we've become quite good. 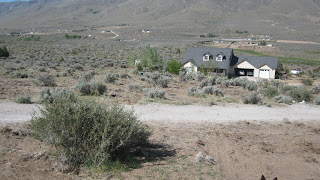 I took this photo after my walk with Buster this morning and just realized I caught the tips of his ears on the bottom right. They've "masticated" about 60% of the brush, leaving room for native grasses to grow and reducing the risk of a fire surge. Huge relief. 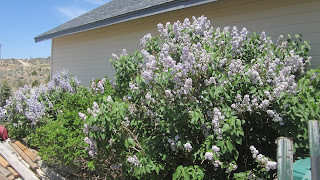 Our lilacs are finally doing their thing this year and they're gorgeous. We should still have snow so they're never had a chance to showcase themselves like this, and they're filled with honeybees. 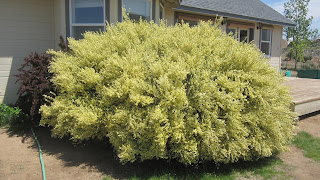 And the same goes for the Scotch broom - it's bigger than ever and filled with honey-
bees. We've had a conspicuous absence of bees in the last several years so this is good news indeed. We have to prune this monster, this year for sure. We've let it get so big that it's going to take several years to get our windows back since you can't prune more than a third of the plant a year. I think I bought the wrong variety - oops.
Posted by Sharon at 9:14 PM

You BOUGHT Scotch broom? I think I'm going to faint. (Just kidding; I know there are lots of ornamental varieties. Still, couldn't you just dig some of the millions up from around here and save us the work?)

Michelle said...
This comment has been removed by the author.
10:01 PM

The Fiesta colorway is just too much fun! Your lilacs are beautiful...they bloomed early around here this year (end of March) so it's nice to get another look! Good news about Charlie!

Glad to hear that Charlie is doing better.

The towels and your color experiments are lovely. What fun.

Argh!! on the cutting of the dummy warp. I've done that sort of thing so many times. My beginning weaving teacher (years ago!) would not allow us to keep scissors near the loom in beginning weaving. Her theory was that getting up to get the scissors would help to make you think twice about what you are going to cut. Sadly...getting up to get the scissors just makes me forget what I got up to do.

I love the fiestaware towels! All of the weft colors you've woven so far are wonderful. I can't wait to see the lime, and you should definitely try the purple.

Yeah, you bought scotch broom! It grows here on the coast without abandon....and they'd love to get rid of it. I have to admit yours is beautifully shaped.

I'm so happy to hear Charlie is doing much better! I love your fiestaware towels! Just as colorful as the dishes.

How would one distant friend go about reserving a set of these most recent towels, emmm?

Sharon, your weaving is beautiful!!