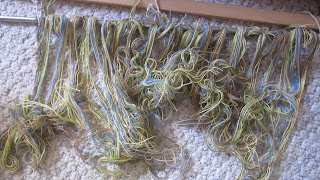 This is the colors in my warp, still on the apron rod, still on the floor. I realized that if I didn't post tonight, it would be next week sometime and I really want to show the last set of towels that I hemmed and wet finished today. Laura is coming down from Oregon tomorrow for several days and I know we'll be busy. 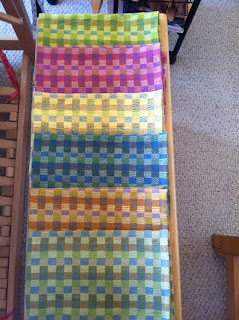 Once again, I'm flabbergasted that all these different colored towels come from that one warp, and probably the towel on the bottom best preserves the warp colors. I have a craft fair next Saturday. I'm going to Kiernan's Little League game tomorrow in the cold blustery wind because I won't be able to go next week. I know he likes it when we come to his games. 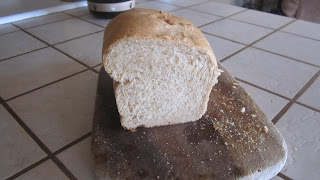 I decided to set some bread after breakfast. I'm really not enjoying the gummy store bread and on the other hand, I don't enjoy the taste of heavy health breads either. This is half white, half whole wheat. Bread is so easy - it doesn't require much attention but it does take time. I tended to it in between doing laundry and hemming towels. Everything went swimmingly until I realized that the bread had been rising in the pans for an hour and a half. Sigh. I punched it down again and let it rise for the third time. I didn't think to rewet the towel, which stuck to the top of the bread and made it lumpy. It ended up coming out of the oven just as the stew was ready - perfect timing - and it takes so good that we ate this much of it at dinner!


Never underestimate the power of what you can do when you believe in yourself!
Posted by Sharon at 9:36 PM

Great video...thanks for sharing. The towels are amazing...I love the different colors.

The pictures of your towels - WOW! I wish I could afford a set! They are so beautiful! But it then would take time for me to be able to breadk down and use them!

re: the towels....very nice!! What a nice spring collection. The "Campbell Collection" perhaps?

Those towels are gorgeous....how many did you get???

Gorgeous towels in striking colours. Those will fly off the display at the next craft show!

Cool video! Cool towels!!! Now that my loom is clear, I'm totally thinking of doing some of these towels!

That video brought tears of joy for that man to my eyes. What an incredible journey and what a stout heart to never give up.

I love the towels, but I think that pink one is my favorite, although the ones closest to your valley are a close second. No wonder you sell them so well!