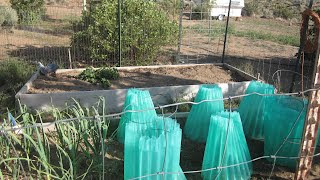 This probably doesn't look much like a garden to you, but this is our Fort Knox of Vegetables. Tomatoes are in the walls-of-water, the garlic has come up nicely and in the second box, the potatoes have begun to peep up. A third box to the left has onions, pepper plants in walls-of-water and carrots have been sown. We could still have a freeze. Do you remember that lap robe I wove from wool I dyed with rabbit brush? I'm wearing it right now! 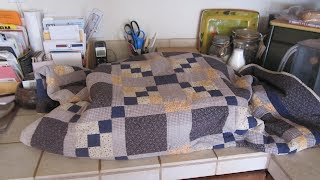 I started the morning with a batch of soap. I had to make soap on Friday too. I've had a couple of orders suddenly and with Spindle Camp in two weeks, I know I'll sell soap there. Soap is tough because of it's three week curing time. Running out is more than running out. It's running behind. 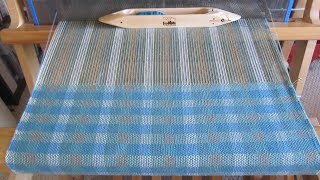 I haven't had studio time since last week so was glad to finally get upstairs and work on this warp today. I'll be glad when I'm experienced enough to avoid the sleying and threading mistakes I always seem to make. I made two time costly errors but at least this time I have enough warp for eight towels. If I have to fix mistakes like that on every warp, I'm thinking about trying even longer warps, though that idea still gives me (more) gray hairs. This is my first towel in the sea glass series. I use eight colors in the warp so I'm thinking about using all eight colors as weft. It was almost dinner time when I'd gotten this far - tomorrow is Town Tuesday and round two of tai chi. More hurry up and wait, as they used to tell us military wives.

I'm doing a craft fair on Sunday with Carol and Kerry - it's another equestrian show, so it will be fun - profitable? Not sure. They've really gotten into the craft fair thing and have ferreted out some pretty good ones, also some dogs, but all mostly cheap. We've had a lot of fun sharing booth space - it makes a craft fair more entertaining. They're asked me to split a booth with them at the McQueen Craft Fair, which is juried, one of the premier craft fairs in Reno, and *not* cheap. McQueen is the high school my kids attended so it's a soft spot with me. Today I have NO inventory and the thought of generating enough to pay for the booth space in October scares me to death. The application process is seriously daunting. I may be worried for naught.
Posted by Sharon at 9:12 PM

Well, first off forget ever getting so good that you don't make threading errors.
That is NOT going to happen.

I tried soap once, with suet....omg, it was an awful production.
I admire you for making such nice soap.

Shows???? they are fun for a short while...basically too much work for too little money.....too much effort....and you can get disappointed big time. Better off to find a nice shop to buy your stuff wholesale......seriously.

I'll trade you the weather we have been having - we grow good tomatoes in Indiana for a reason!

You have plenty of time between now and October. Let's see, if you can weave 5 towels a week, that's 17.5 weeks, that's 87 towels complete by then. Hee!

I love the colour of your towel.
No mistakes in warping after some time? No way.
I've been weaving for over fifty years now and find new mistakes to make every time. That makes a weaver's life is never dull, don't you think?