Sunday Was a Fantastic Day 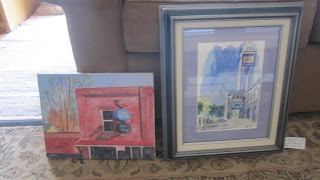 Sunday was a fantastic day. Erik was having a loft sale. He's downsizing to a smaller loft at the Riverside Artists Lofts to reduce his overhead. I told him that's a good thing since he'll fill any space he has. He's a prolific painter and is able to make a living selling his work. I love his art and value him as a friend. I spent the money I've made on towels on these two paintings. I always do that - earn some money and buy some art. Ian instantly was drawn to the watercolor of the Ferry Building in San Francisco. It was much harder for me. I had it narrowed down to three when DS Matt and Julia came. Matt and Ian favored the Overland Hotel and so I went with their votes. There really was no wrong answer.

The four of us went to the Riverside Theater to see The Avengers. I'm not much of an action flick fan and I am a devoted Robert Downey Jr. fan and was not disappointed. The Riverwalk area was a buzz with anticipation of the eclipse - lots of fun energy in the air. Afterwards we walked next door to Silver Peak Brewery and got seated on the eastern patio. The weather was unusually balmy and the lighting was bizarre as the eclipse phases played out, not that we could see them or should. It was a delightful afternoon. 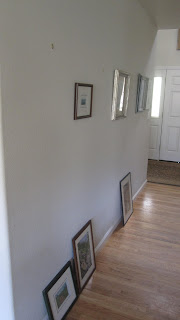 I knew I was going to have to work to get two new pieces hung on our limited walls so started after breakfast. It took me two hours and I had to move 14 pictures in all to get space for the two new ones. 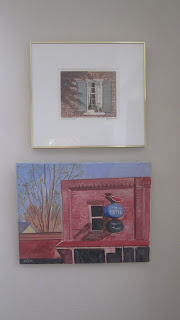 The Overland Hotel (a historic building in Gardnerville) ended up hanging with a lithograph we bought in Alexandria, Virginia of a window in a brick building. I thought they could become good friends, two brick buildings - they have a lot in common. 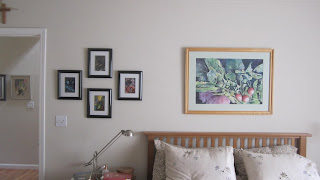 The four-piece collage set that I always just walked by in the hall is now over my nightstand and I love seeing all the bright colors. Tracy Gundersen is the artist of the set and the watercolor - not a tribute wall. 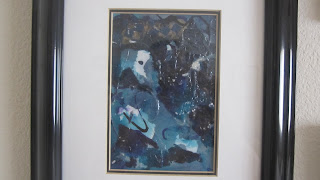 Here's a little bit of detail - such a shame to have hung it all this time in the hallway and never enjoyed it. I find both Ian and I are looking anew at our pieces - not that I want to move everything every few years. No thanks. 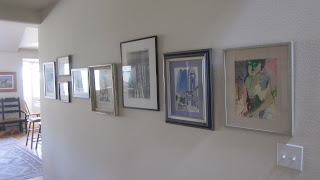 I did it - I got everything up and I am thrilled. I keep wandering through the art in our little house as though I were in a new gallery. Years ago when I was first diagnosed with Chronic Fatigue Syndrome I discovered that looking at lovely things produced an endorphin response and reduce my fatigue load. At that time I subscribed to three art magazines and I read them like a drug. Now I use Ritalin at half of the smallest dose - thank God for Ritalin. It allows me to make art of my own. We joke about DuPont's ad "better living through chemistry" but sometimes that's the truth. 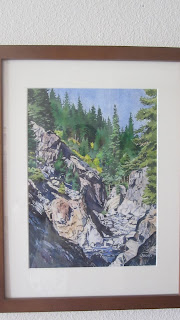 Probably my favorite picture of the hall group is still this one from Larry Jacox that he painted of the Yuba River. If you've ever seen the Yuba, you know that it has a unique hue of blue. Go to Google images, put in Yuba River and you will be astounded. 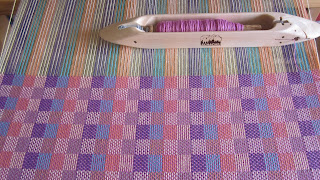 This is my sixth and final towel on the Fiestaware series. I kept looking online to double check their colors and worried how to manage the coral. Finally I realized that if I "mixed" pink weft with the orange warp - it might just work. And it did! That is precisely the right shade. I'll finish the towels tomorrow.

I finished the weaving this morning but it was Town Tuesday - always an action packed adventure. I left my doc's with a prescription for high blood pressure medicine. I've resisted and got to thinking that I could end up like my uncle who dropped dead at 60. So now I'm officially hypertensive and I've even taken my first pill. I sandwiched in a quick friend visit, caught my lovely 20 zen freestyle laps in the saline pool and followed up with an awkward first session ever of Tai Chi. I cannot believe how sore I am from that - I see the value and will go back, but man oh man, do I hate being a beginner. If the secret to not aging is learning new things, I'm not going to age for four months - that's how long Mark the instructor told me it takes to memorize the steps.
Posted by Sharon at 9:49 PM

What a fascinating post. I learned new things about you and love your commitment to the arts. Having sold a number of pieces myself over the years I have an idea of how rare someone like you is. You're making wish again we lived much, much closer to one another....

That's a really good idea to change around the art in your house. Scott and I need to do this because, right now, I cannot tell you what is hung where. Besides it would get some others out into the light of day that have been lurking in the shadows.

I think your fiestaware series of towels are going to sell out quickly. With summer coming on, people will love the brighter colors.