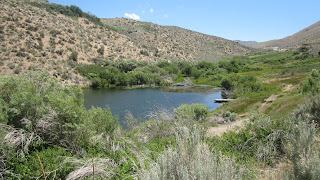 Every time I drive by the ponds on Ross Creek, I am again reminded how much I love that blue. To me it's the blue of that cone I'm waiting on from Webs. The sales representative told me that they periodically change colors, add new ones, retire old ones. I think on my next order I'll buy several cones of this blue in case they retire it. 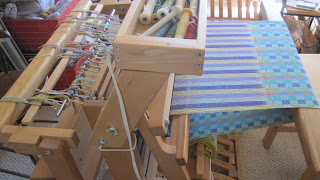 I finished another warp of the Fiesta ware series today. I got nine towels from 8 1/2 yards of warp and though there's more loom waste than I'd like, it was comfortable to be able to finish weaving at the fell (by the front beam which is recommended). 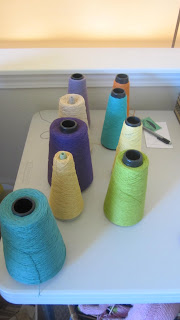 I'm so out of yarn that my choices for the 9th towel were purple - no thanks - or a dark turquoise, which is what I went with. 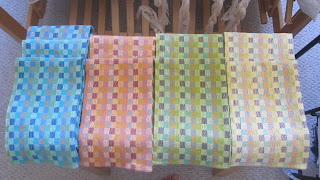 The ninth towel is in the back and it's really not that different from the bright turquoise towels. I just learned today that there's an entry at the Nevada County Fair in the weaving division for items inspired by Nevada County. I think I'd like to try some towels using the colors of the Yuba River, but that's going to require another yarn order. I don't have gray and you can't do the Yuba without the gray rocks. Thinking, thinking. 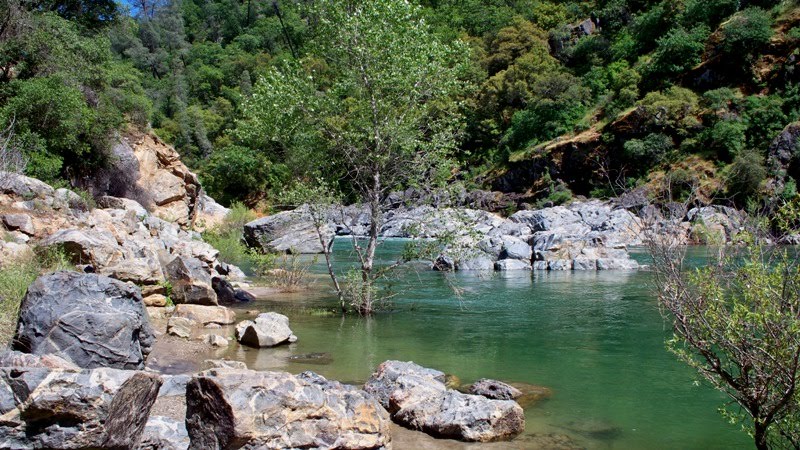 I trolled for way to long for photos tonight to show what I'd be looking for. The Yuba has a distinctive cast to the water and it's not always this green - click for a full picture. Then then there are the rocks, moss, trees, gold reflections in the water. I think I'm can pull it together, but I have to buy more yarn, and my last order just shipped today. 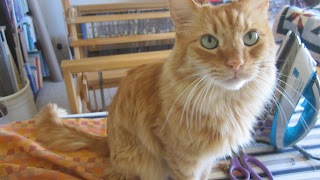 Why do I think Charlie is getting better? Because he's become obnoxious. He insisted on helping me hem the towels, which made me more than a little nervous since that's a very hot iron to his left. 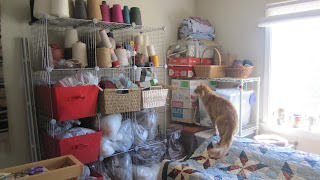 And he's also become daring and inquisitive. He wants a plant on the shelf up there - right in front of his eyes. Biggify, you'll see it. He does. He's death on house plants and has a couple go rounds with one when I got sloppy about taking it down to water. 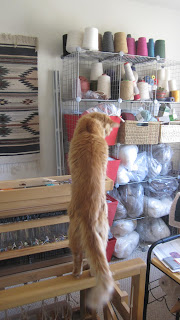 Charlie tried several strategies and angles of attack. He poised several times to leap, even trying to launch from a bin that was too rocky for him. Thankfully he came to his senses and decided to take a nap on the window sill instead. I think this plant is doomed, but I really want it to grow since I brought the starter home from my stepson's wedding.


You're not going to believe this - I'm not sure that I do. I posted a picture of my towels on Facebook and during the time I was posting this blog, all those towels sold.
Posted by Sharon at 8:00 PM

I hope you are getting $20 each for those towels....they are gorgeous.

Lovely new batch of towels!! You've been so productive, even 'with' Charlie's help. Glad he's feeling better....good luck with the house plant.

Congratulations on selling all of those towels. I think it is the block weave design that is doing it for you. They look different from other towels I have seen out there.

I am so glad Charlie is feeling better. So far our yahooligans are leaving the plants alone, but bags of fiber seem to be fair game.

I'm thrilled to see Charlie back to hijinks. It's a true way to see they're feeling better.
I can totally believe that your towels are selling that quickly. They are beautifully executed and the inspiration behind them is unique and fun.

Me again - on most warps I'll weave off any bit left on the warp to use for various small projects, lavendar bags, sachets, greeting cards.

http://www.handweaver.us/georgia_yarn_company.htm
I just saw this guy, I don't know if it will help or not. He's an advertiser on Rav. Those are just gorgeous. Oh well, maybe next time.

I found a tabletop greenhouse to secure my houseplants in. I have also developed an interest in terrariums to keep out feline invaders.

Goooooo Charlie! Let's see if you can make it to the top without knocking everything down.