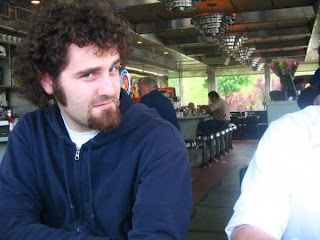 Today is a very special day. This picture is the first one I had seen of my oldest grandson since he was three days old. Christina found it on MySpace. He is a lookalike of his uncle - eerie. We didn't meet him until the following year. Today is his 26th birthday.

My daughter was a high school sophomore when he was born, a result of date rape. He was adopted when he was three-days old by a fabulous couple in Massachusetts. A mutual friend saw the potential and set the ball rolling. I posted about learning about him here We first met virtually on Facebook which I posted about here. I posted about meeting at the airport for the first time here. For us, open adoption has been very successful.

I was upbraided by a boss years ago for allowing my daughter to go through that. After all, she said, I was the adult and the parent and should have taken appropriate measures. Christina was adamant, abortion wasn't an option. Friends had offered to pay for it and keep it discreet. I remember her saying, but my baby has fingernails. At the point when she realized that the baby she had fallen in love with would grow up on welfare, she chose adoption. I've been proud of her always and in this especially.

Since his parents reestablished contact, Chrissie and John are in daily contact, mostly texting. She said I know I can't be his mom, I just want to be a friend. Recently I had lunch with a friend and somehow this subject came up. I told her how proud I was of my 15-year-old daughter and of her courage. She said, I wish I would have had her courage. Chrissie has been very open with her story and I cannot tell you how many times I've heard friends express regret that they hadn't made Chrissie's choice. I celebrate her choice and my grandson. Happy birthday John!
Posted by Sharon at 11:16 PM

It is quite simple really....your daughter is special, and smart, like her Mom.
What an amazing story.
Thanks for sharing it.
And for making it a triumph, rather than a secret.
Bravo.

Beautiful story. And I thank the other Hilary for pointing it out to me.

as women in this age we are so fortunate to have so many options.i have never regretted a day of my sons life or choosing to be a single parent(i was not a teenager). i applaud your daughters courage faced with so many painful decisions at such a young age and you for supporting her. motherhood is a personal journey, and babbies ,even on their 26th birthdays, are blessings. thank you for sharing.

I love this story; it really should be written up for Guideposts magazine or something!

oh how much I admire you all
hugs

wonderful! may you all lead happy lives - always connected. congrats on your POTW!

I am here from Hilary's blog the Smitten Image.
This is so thrilling and its amazing you could all reconnect.
Blessings to all of you.

What a beautiful story. Bravo for sharing so openly. Wishing you many more blessings in life.

I am very lucky to have TWO amazing and loving families, one on each coast :)