Hoping for Rags to Riches 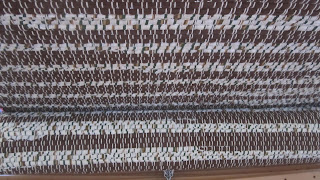 While I await the arrive of my 8/2 cotton order, I thought I'd make use of the time and warp Miss Millie for 2'x3' rag rugs - at least that's what they are on the loom. This is the first one, taken from the underside because I forgot to take a picture before I advanced the warp. I used two Goodwill sheets and can't say I like the rug as much as I liked the sheets. 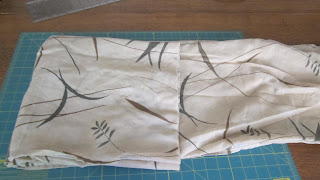 This is the third sheet I bought last week. It's lightly patterned and the same on both sides so I decided to use just it for one rug. I'm cutting 3" strips so ended up needing this entire king-size muslin sheet. I think three bucks for weft isn't bad. Preparing rags is just labor intensive. 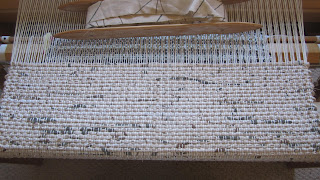 I love love love how the rug is weaving up and have decided that if it doesn't sell in October, it's going to have a home by the side of my bed. 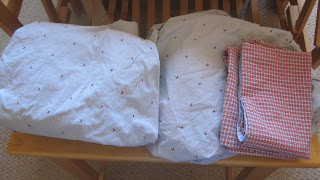 These are the sheets I'll use for the third rug - a double set of twin sheets, given to me by an artist at the Artists Coop. I think I'll use the red print pillow shams on both ends. The king-size sheet spoiled me. I'll have to do a whole lot more seaming with the twin widths. 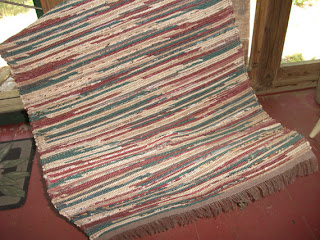 I found this woman's rugs on Etsy and have since had several messaged exchanges. Her name is Pat McDaniel from Missouri, a former science teacher, and a most helpful weaver. We're like that I'm coming to realize. She uses hemstitch for fringe and said her daughters wash theirs often and with good results. Her rugs are beautiful and she has a lot of positive feedback. She uses a denser sett and told me as a former science teacher, she can't get past the need for structure to support the cloth. I was just happy to find someone who hemstitches the fringe and so that's what I'm doing with mine. I'll know how I like it in five more rugs.
Posted by Sharon at 7:41 PM

Sharon, With the exception of the first, I always hem stitched my rag rugs and then bound them with a pretty fabric at the ends. I am not a fringe lover, but the pups are. ;)

I love it that old sheets can be repurposed into good, long-lasting rugs.

I like your rugs and might actually be inspired to make one myself. It's a great use of old textiles. I can't see why hem stitching wouldn't work just as well as knotting.