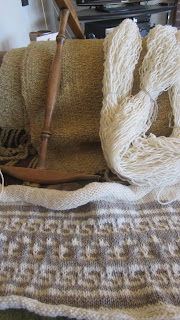 Last night I finished knitting the back of the jacket I've been working on for quite a while. It occurred to me that I might not have enough yarn to finish the project, which is a problem when the yarn is hand spun and the last of the fleece. I woke up late this morning, tired from my work frenzy yesterday, so laid in bed and just dozed and mulled thoughts. I realized that the piece seemed very large. I measured it this morning and it's right on gauge but they've given it 10" of ease. I made a spontaneous decision to rip it out and make the next smaller size. It won't be as commodious a jacket but at least I'll have enough yarn. It bothered me that the white was thicker than the gray and it also bothered me that the gray was such a start contrast. 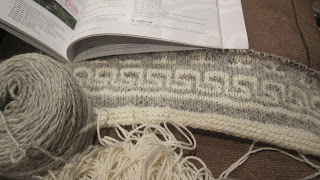 In my sleepy bed musings I remembered that I had made another gray yarn years ago that just might be the ticket and it is. I took my coffee and knitting to the front porch and knitted for a very long time this morning because I could. This yarn is a gray heather and I like it so much better, for it's color and for it's gauge. I'm not a fan of enormous sweaters so I'm happy with my decision. 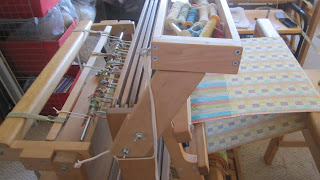 I finished the last towel on this warp this afternoon. It was a close call and the last three inches were more like hand sewing than weaving. I had to literally thread the shuttle through a very narrow warp at the shuttle race - it took forever. So no, a 7 1/2 yard warp doesn't make eight towels. I've calculated that a 9 yard warp will comfortably do 10 towels. 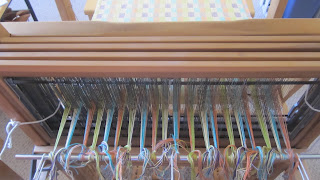 I couldn't advance the warp. There was nothing to advance so I had to keep threading the shuttle though, right up to the shuttle race, even when I wasn't even sure I'd had enough for the towel. I did but boy was I sweating bullets and not from the exercise. 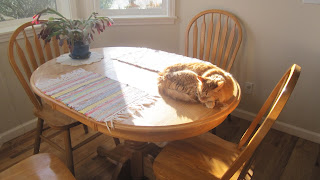 After dinner this evening, Charlie decided that since his humans weren't using the table anymore, he'd catch a sun bath. His five weeks of antibiotics have run their course and now it's time for him to recover. Our biologist friend Petey says that with the infection gone and the toxins no longer poisoning his kidneys, they can start to heal. His appetite is back and he actually likes his kitty kidney food. He's so tiny it's hard to tell, but we think he's gaining weight. He's certainly more animated - the dogs can attest to that. I'm hopeful and now it's a waiting game

And tomorrow is my second weaving workshop in a year - goodness!
Posted by Sharon at 9:40 PM

Glad you ripped your sweater jacket - it's a tough thing to do but oh so much better than ending up with something you don't love.

I'm glad that Charlie seems to be on the mend. His antics are delightful! I like the new version of the sweater too. Better to rip and restart, and get an end product you'll like. I do love your towel projects. So much productivity, puts the rest of us to shame.

Yes, sometimes it is better to frog out and start over. If you aren't loving the knitting, you aren't going to love the wearing of it.

I love that last towel!