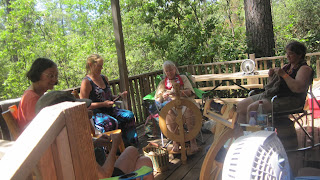 It was such a hot weekend - off the charts! Saturday was the worst, soaring to the century mark. We invited anyone to come to our deck. we dragged the fans outside and ran the ceiling fans inside. There's no insulation in the cabins so we just opened it up for shade. 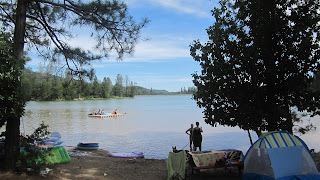 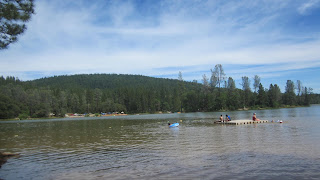 I've been terrified to swim in water over my head, yet I swim for 40 minutes at the gym. I went right for the platform, and then saw Susan floating on her back. She taught me how to float. I laid back and easily floated for a half hour, watching the trees and letting the cares of the heat slip away.

Hermi and I got caught in road construction for two hours on our way over the Sierras and Eleanor overheated. I know now that you're supposed to turn on your heater in that situation. I was feeling pretty heat sensitive, long before we arrived. Thank you Luci for the bathing suit! Thank you Susan for the float lesson!! I've never been in a lake before so this had never come up. The only lake in my life is Lake Tahoe, and trust me, you don't go in it and you certainly wouldn't want to float. That's a shortcut to Hypothermia. 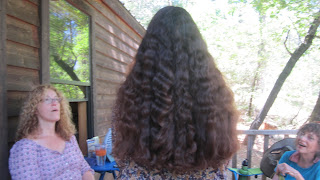 Barbara Sue let her hair down. None of us has seen in other than in braids. She's been inter-
viewing hair dressers, trying to find someone who can cut her hair. I don't envy her. Finding one and building trust is a long process. 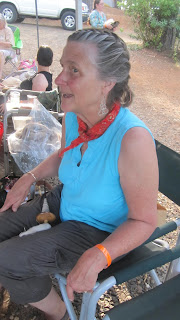 I haven't had a direction for my hair, just been letting it drift, so to speak, so was unprepared for the weight and heat of it last weekend. Hermi loaned me the wet scarf and Luci, who does Ren Faire braiding, got it up and contained. It's coming off on Tuesday. 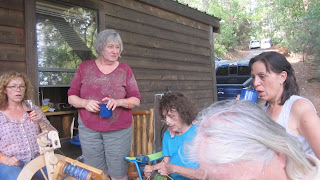 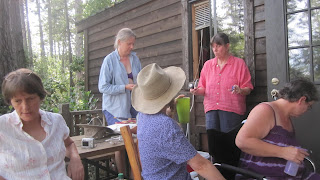 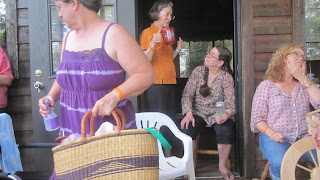 We packed our deck Saturday afternoon. It was way too hot for the Easy-Ups and canopies at 100 degrees. In retrospect, I realize we probably pushed the structural safety of that deck. We were killing time before walking down to the campground/resort restaurant. 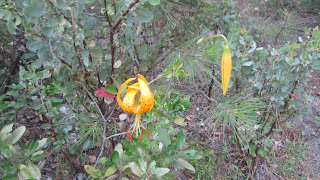 I was excited to see this Humboldt Lily as I walked back from dinner. We've camped earlier in the year the past two years so it's been a very long time since I've seen one of these. I've always thought they look like something from a book of fairy illustrations.
Posted by Sharon at 8:51 PM

Playing with wool in 100 degree weather - I live fiber people!!

Usually, you are dealing with cold and rain, this year the opposite.

How much spinning did you get done?

Love that purple and natural basket someone is holding! I dont know how y'all could think of spinning in that weather - wouldnt the roving stick to you??

Spindle camp is glamour camp for you! First you look all young and slim on the stool, then you look all chic and twentysomething in braids! Frankly, its a great look for you, much younger-looking than the way you usually wear your hair. Time to do something different than your "usual," that's for sure.