First of all, I want to thank everyone for your support by comments and emails. Neither Ian nor I realized how deeply Charlie was entrenched in our lives, and I know that no cat that finds us in the future will replace him, but also I'm sure that another kitty is out there for us, but not just yet. Charlie was a replacement for my cat Robin and it was too soon afterwards. I've learned that lesson.

We're in the middle of wildfires and yesterday an electrical storm came through, leaving us without power until last night. It started a fire on the mountain behind Mim's and they didn't have a phone to call it in. Thankfully the rain came and extinguished it. We were left without phone service until late this afternoon. We have a generator for power outages but can do nothing when the phone is out. This all has been stressful, not only for us, but also for the dogs. 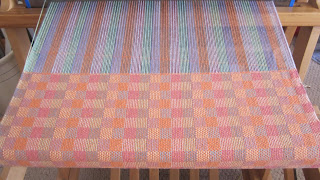 And so I wove, no power needed. It was so miserably hot that it didn't matter whether we were indoors or out- no power, no fans, no air conditioner. I found throwing the shuttle to be comforting. 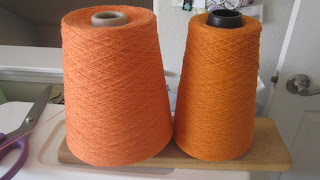 I wasn't sure if buying the UKI light orange from Michael would be that different but it's all the difference in the world. The left one says mangos and papayas and the right one says fiesta. 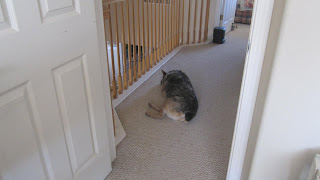 Buster kept me company and at one point, I found him wandering out of the bathroom and into the guest room. I had to finish the laundry this morning that was cut short by the electrical storm yesterday. Buster dug all through it. Charlie always slept in the piles of laundry. Buster keeps trying to find him.

I wove 2 1/2 towels this morning before the heat came up. I realized how much time I spend online during a day when I found myself doing other things. I caught up on reading the last six issues of Vogue Knitting magazine and I wound off some skeins of coned yarn and washed them for knitting. 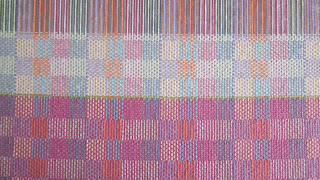 The eighth color is silver and I almost elected to not use it for a weft. It's pretty pastel, though trying it out, I think it's a little like tropical shaved ice. I'll think about it tomorrow. By this point the temperature in the studio had become insufferable. 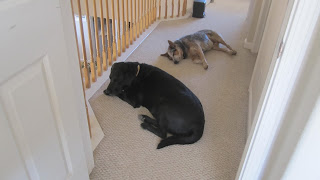 I finished for the day and realized that I had not one but two dogs with me. They never used to accompany me as I'd weave. That was Charlie's job. Sammy has moped for the past two days, but then Charlie was her cat. Often we'd find him with the fur on his back licked by her and sticking up like a mohawk. Charlie was smaller than Sammy's head, and that's how Sammy loved on him. Sammy has never figured out how to ask at the door to come inside, but Charlie would cry out when she was there to alert us, taking care of her dog.

I cannot imagine not having another kitty and as painful it is to lose one, I know I'll put myself right back in these shoes as soon that next kitty finds us. Now if I can just stop crying. Again, thank you so much for the love you've shown me. I am keeping his banner.

Oh dear, everyone is missing Charlie. I feel for you all. Someday the time will be right for another kitty....

I love your banner photo, and I'm glad you are keeping it. It is such a beautiful image of Charlie. Glad your dogs have taken over keeping you company.
Jenny

I think Jenny says just what I wanted to write. The banner is just fine and a new kitten in time, your time.

Mourning friends all of them. Who says animals don't have emotions? Peter looked for Dennett for months
as did Miss Bea. Extra pets an hugs for all in this time of transition and a/c too! The weaving looks great.
We're supposed to have a very active thunderstorm weekend. Of course the fire danger has climbed to extreme. Crunchy dry and waiting for lightening. GROAN

Mourning, no electricity, extreme heat....I have been there and am so sorry for you right now.

Am thinking of Psalm 147:3 He heals the broken hearted and binds up their wounds.

Love the warm colors in that warp. I find medium grays so hard to come to terms with in weaving.

Your poor dogs look so very sad. It's amazing how their emotions reflect human emotions at times. Give them lots of love - it may also bring a tiny bit of healing to your heart. Glad you're keeping the banner.

Beautiful colorway, Sharon. I ordered the Silver from Michael as well (when Mel and I order together). I see it useful in many colorways - and gray can be very neutral as it goes with so many colors. I sew quilt tops with medium gray (except for ecru or white quilts). It is very forgiving and blends right in, plus I don't have to worry about finding colors to match what I'm doing.

I know that you will be re-catted. Whomever shows up at your door, follows you home, or steals your heart, will be there right when they're supposed to be. I wouldn't be surprised if Charlie sent "him", either.
I always swear I won't get another. Then...someone shows up - like Daisy and her brood. Charlie won't ever be replaced, but he knows there's allot of room in that heart of yours, too.
((hugs))

I remember when we had to put our cat, Patty, down and Neil would go through the house calling out for her. He did that for about a week before he realized that she was not coming back.

Heart-breaking. My heart goes out to all of you.

Its the hardest thing to do but the kindest act ...

Even with a new dog in our lives and we love her dearly, we still miss and talk about our dog Connor. They leave a huge hole that only time can heal.

To paraphrase a favorite quote from the old movie "Oh God" : "Doing normal things will make you feel more normal." I'm glad to see you are occupying your hands with more towel weaving. The orange towels echo the ginger shades of Charlie a bit. I expect he is still supervising you in his own way from wherever he is. Weave your towels, love your doggies and heal.

What a special little cat to wrap both humans and canines around his tiny paw! Cuddle with the dogs; I'm sure they will understand why you are sad....

Sharon, oh no! I am so saddened and so so sorry to learn about Charlie. You know your header photo of him "helping" at the loom was one of my best favorites.

Love the first towel on the loom. Funny how colors I wouldn't have thought to use go so well together.

A big cyber hug to you.