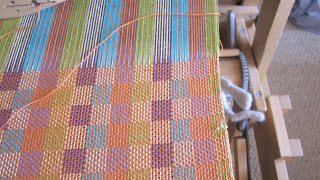 I'm a glutton for punish-
ment. I realized last Tuesday that I needed to weave 18 towels before tomorrow. I had another warp on of the Fiesta ware, which brings me up to 30 towels in this colorway. Time for something else for a while. I needed to clear the loom for the Yuba River towels since I have a fair entry deadline and, man did I weave a lot to get that Fiesta ware lot done. I finished the 10th towel, pulled them off, cut them apart and broke for lunch about 2:00 - starving! I'm always starving. When I came back I was appalled to realize that I hadn't zigzagged between the towels. And you know what? It really didn't matter. I was just careful not to pull any threads. It took a half hour off the finishing time - at least. 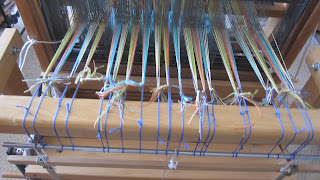 I finished the towels and warped again. The deadline is that I have to have these off and ready by Saturday, i.e., day after tomorrow after tomorow. Thankfully, Lindsey saw that I'm driving my entries over and called to offer me her guest room Saturday night. Otherwise, it would have been a five hour round trip. You have local fairs, be thankful. This *is* my local fair and it's in another state.

Laura reminded me when we were at lunch in Bend that I can reduce loom waste by using larks head knots with leads. I knew this but hate messing with the knots. Meanwhile, Melissa emailed me an article about using Texsolv to eliminate tying the larks head knots altogether. It makes sense. You slip the warp knot through the hole. And then at a guild meeting Monday, Beryl and Igor were stunned that I hadn't changed my Gilmore tie-ups to the Texsolv system. I sense there's an expensive order in my future, but first I need to finish towels for peace of mind. Then I need to sell them to pay for my Texsolv order since I spent my last towel sales on more yarn from the Georgia Yarn Company. 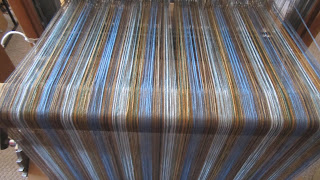 This is my warp as I interpret the colors of the Yuba River and its canyon. I had a terrible time getting started. Monday and Tuesday both I had to make trips to town. Monday I'd woven several inches before realizing I had missed a threading error. I tried to remove as much as I could before leaving for my meeting.

Tuesday morning I got it fixed and started weaving. The first towel is always rough because there's so much tie-up stuff underneath for the warp to snag on. This towel was snag on steroids! What should have taken less than hour took two. I've warped for eight towels so I need eight hours of weaving time. 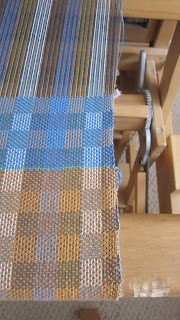 Doubting Thomas. I didn't believe that I could get by without a right floating selvedge so added one on this warp - again. After thrashing my way through the first four towels, I tore the floater off and the right warp thread so I'd have an uneven number of warp threads. I knew that I'd catch the right thread every time if I did that. Look at the difference. I went from amateur to machine finish. I'm no closer to having an answer to this phenomenon, but I'm a convert. No more right floaters for me. The left floater is really pretty so it gets to stay.

I wove all day, took a break to drive over to Mim's for eggs and just visit - always a welcome interlude. She suggested I buy more eggs at time but then I wouldn't get to see her as often. Then I came back, wove until 4:00, showered and called it a day. I have to go to town again tomorrow. Ian's truck has a new clutch and is ready to come home, but that's two weaving hours I won't have. Three more towels tomorrow, then hem and wash so I can wet finish. I want to put them under weights for a least a day to press out all the wonkiness.

Meanwhile, I got an email from Michael. He's shipped my UKI cones and the next warp will either be my newly devised Serape or Aloha color ways. I can't wait to try them both! Hello, my name is Sharon and I have an addiction.
Posted by Sharon at 8:56 PM

Hats off to you Sharon, I hate weaving/sewing/insert hobby here/ on a deadline. Which is not to say I can't produce on a deadline. I use to run payroll and that's all about deadlines and I loved it, but it was my job, not my hobby. Oh texsolv tie-ups are so easy. You'll be happy you spent the $$. Really, you will.

ok, first off, tell me that again....are you saying that if you have an uneven number of threads, you can do away with the right side floating selvedge??

and where are you buying the UKI......is it soft after it is washed, is it 8/2 unmercerized?

There are far worse issues in life than to be a prolific weaver. LOL! Your colour choices, as always, are stunning.

Congratulations on finding your solution! I know your towels will be a hit at the Fair!!!

Great colors in that Yuba warp. I really dislike working on deadlines, I'm a do it ahead of time gal, but it doesn't always work out that way.....so I work on a deadline and say it won't happen again....until it does....

I love your Fiesta Ware towels. What is the structure? The plaid is beautiful. Deb

So envious! I wish I could have made my self interested in weaving. You do such an awesome job!
I am heading down your way to stay with Mim for a couple of days, we need to get together!